imagesize =
image_caption = Legendary Palace restaurant at the corner of Franklin and 7th st in Oakland. 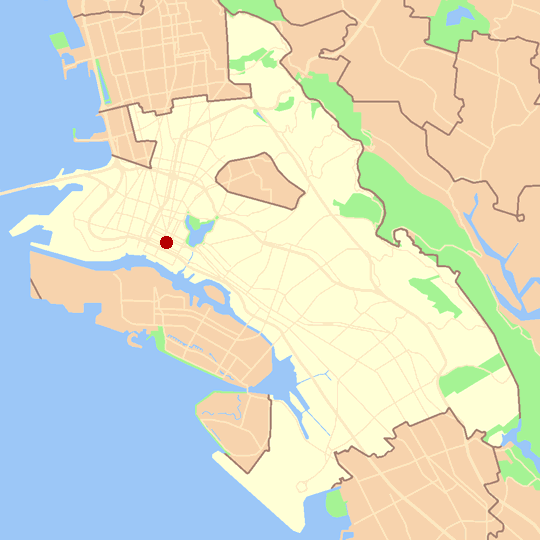 mapsize =
map_caption =Location of Oakland's Chinatown in the City of Oakland.

Chinese were the first Asians to arrive in Oakland in the 1850s, followed by Japanese in the 1890s, Koreans in the 1900s, and Filipinos in the 1930s-1940s. s began arriving in the 1970s during the . Many and s can be heard in Chinatown due to its diverse population.

Chinatown is located in downtown Oakland, with its center at 8th Street and Webster Street. Its northern edge is 12th street, and its southern edge is (located approximately at 6th Street). It stretches from Broadway on the west to the southern tip of in the east.

Oakland Chinatown dates back to the arrival of Chinese immigrants in the 1850s, making it one of the oldest . By 1860, the census of Oakland included 96 "Asiatics" among a total of 1,543. More Chinese arrived to help build the western portion of the during the 1860s.

The Chinese settled in shrimp camps on the of Oakland at 1st Street and Castro in the 1850s, near the Point in West Oakland which was referred to as "Chinese Point", and at 4th and Clay Streets. The Chinese settlement at Telegraph between 16th and 17th Streets burnt down in 1867 and was relocated at the Chinatown between 19th and 20th Streets; it is now known as Oakland's Old Uptown Chinatown. [ [http://www.uptownchinatown.org/ Oakland's Old Uptown Chinatown] ] Other areas settled were 14th Street between Washington and Clay, and the Charter line (22nd Street) between Castro and Brush Streets.

Fears of the Yellow Peril and local exclusion laws forced the Chinese population to resettle to its current location centered at 8th Street and Webster Street in the 1870s.

The first Chinese in Oakland fished in the for similarly to the Chinese at China Camp near San Rafael. [ [http://www.parks.ca.gov/?page_id=466 China Camp State Park] ] In 1868, Chinese laborers built the Temescal Dam in Oakland providing water for the East Bay as well as the Dam in 1874-75. They worked in canneries, cotton mills and fuse and explosive factories as well as farms. In the 1880s, discriminatory laws made it difficult for Chinese immigrants to own land or even find work. They found work as workers, cooks, s, s, or as s. The Chinese Exclusion Act severely limited the further immigration of Chinese. By 1900, the Chinese in Oakland numbered less than 1,000.

The and fire destroyed most of San Francisco's Chinatown and more than 4000 Chinese survivors found refuge in Oakland. Even while San Francisco Chinatown was rebuilding, many stayed in Oakland bringing the Chinatown population to about 2,500. Because of immigration restrictions barring Chinese women and children, a society was created.

In the 1920s, Oakland Chinatown grew from 10th Street to the waterfront from Broadway to Harrison.

Even until 1940, the Chinatown population grew only to about 3,000. With the United States involvement in and the fact that China was an ally, the Chinese Exclusion Act was repealed in 1943, however the immigration quota was maintained at 105 immigrants per year.Fact|date=March 2008

In 1950, Chinatown grew to a population of 5,500, but local housing was lost due to the construction of , which runs through 8 blocks between 5th and 6th Streets and serves as a transportation artery for some of Chinatown's commercial activity, (8 blocks) and later in the late 1960s, the headquarters and Lake Merritt station (2 blocks) and (4 blocks).

Oakland Chinatown was economically stagnant for many years, especially after multigenerational Chinatown residents began moving to the suburbs in the late 1960s. However, Chinatown saw much steady development during the 1980s and 1990s as Chinese American merchants relocated from San Francisco to Oakland, and due to increased immigration from mainland China, , , , and . During this time period, many ethnic Chinese Vietnamese and s began opening new small businesses, essentially replacing many of the older -dominated businesses. Also, investors with Hong Kong backgrounds constructed the Pacific Renaissance Plaza in the 1980's. Chinatown still retains the traditional aspects and characteristics of an older Chinatown. Oakland's Chinatown also includes a historic and still thriving fortune cookie factory.

Although it is overshadowed by its more prominent, tourist-oriented counterpart in San Francisco, Oakland's Chinatown is bustling with activity and considered to be more authentic to many. Other Asian cultures are represented in Oakland's Chinatown as it has also been settled by non-Chinese Asians such as ethnic Vietnamese (many of whom operate many of Chinatown's businesses), Koreans, and Thais making it more of a pan-Asian area as opposed to a "Chinatown." As is the case with other retail and commercial districts around Oakland, the many customers and thriving businesses in Chinatown generate sales tax revenue for Oakland city and Agency coffers.

Japanese immigrants began settling in Oakland in the 1890s mostly in West Oakland around Market Street. Later, hundreds were living in the section between Harrison and Oak Streets south of 8th Street. They owned several stores in Chinatown. After the in 1941, all s were sent to internment camps. The Masuda family had posted a large "I Am An American" sign outside their Oakland grocery store, Wanto Company, at 8th and Franklin Street. [ [http://ark.cdlib.org/ark:/13030/ft138n9812/ "I Am An American" photo by Dorothea Lange] ] Many did not return to Oakland after the war ended. The Buddhist Church of Oakland is one of the few institutions remaining of Oakland's . [ [http://www.buddhistchurchofoakland.org Buddhist Church of Oakland website] ]

*s are held annually at or

was one of the first traditional Chinese art forms in Oakland. In 1907, a Chinese Theater at 9th and Franklin Streets opened which could seat 500 people and had a company of 30 full-time actors from China. Today, three styles of Chinese opera clubs are active in Oakland: . , and .

The Asian Branch Library is one of many of Oakland Public Library's branches and is located in Chinatown's "Pacific Renaissance Plaza." [ [http://www.oaklandlibrary.org/Branches/asian.html Asian Branch Library website] ] The Asian Library is unique among public library branches in the United States as it houses eight Asian languages (Chinese, Japanese, Korean, Vietnamese, Thai, Cambodian, Tagalog and Laotian) in major reference titles and general subject titles, an Asian Studies collection and an in-depth Asian American collection in English.

The Asian Branch Library was founded in 1975 as part of a Federal Library Services Construction Act grant to create a model library serving the Asian community in Oakland with multilingual staff and collections. In 1978, the branch moved from its original location at the Park Boulevard to the Main Library. In 1981, it moved to its own building at 9th street and Broadway. The current location in the Pacific Renaissance Plaza opened to the public in 1995.

Chinatown is located in Downtown between Broadway to the west, to the south, Oak Street and to the east, and 12th Street to the north. The entrance to the , which carries traffic underneath the estuary, is on the edge of Chinatown. Unlike many Chinatowns, it has no formal () or , but it does have street signs.

The neighborhood can be roughly divided into two distinct areas: Between Broadway and Harrison Street is the commercial area, with busy streets lined with markets, restaurants, banks, and other businesses. East of Harrison Street, the neighborhood is more residential in character with more apartments and condominiums, less crowded sidewalks, and a mix of retail stores that are more service and product oriented, with less groceries and restaurants. Though the mainstay of commercial activity is south of 10th Street, there are nonetheless many retail shops, stores, and restaurtants north of 10th Street and in other parts of Downtown Oakland which are owned by Chinese and Korean merchants. In particular at the edge of Chinatown, 14th street between Webster and Harrison is block which features numerous Korean restaurants and businesses, especially on the north side of the block.

The Chinatown Neighborhood Crime Prevention Council for beat 3x, a neighborhood board meets monthly. Meetings are conducted in Cantonese and are open to all.

Located at the crossroads of the 880 freeway, the tubes linking Alameda and Oakland, and downtown, Oakland Chinatown bears a significant transportation burden that dates back to the 1950s. Weekday and everyday commerce in the area creates thousands of peak period private automobile trips daily and resulting air pollution impacts on the neighborhood's elderly residents. Over 20,000 shoppers and tourists use its sidewalks every weekend. The traffic on I-880 is over 100,000 cars per day. The neighborhood is served by a freeway on-ramp to I-880 south at 5th and Oak Street. It is also is served by a freeway on-ramp to I-980 at 6th and Jackson. Recently Oakland's Public Works Agency reconfigured travel lanes on Jackson Street to separate traffic travelling South on Jackson from traffic merging-into Jackson from Eastbound 7th Street. This effectively eliminated, through lane re-marking, any possibility of the lost art of the "alternating merge." The volume of automobile traffic travelling away from the core of Chinatown on 7th street towards the connections was so voluminous and unrelenting, that accidents were occurring.

Until recently, California Auto Insurance company actuarial models charged higher rates to residents in the Chinatown's zip code under a practice known as , or . The insurance actuarial theory behind this market practice purports that drivers residing or "principally garaging" their cars in a certain area face a greater loss and accident ratio. This practice, was outlawed by California voters in 1988 by Proposition 103 on the statewide ballot. The law made its way through the courts for 18 years before several insurance companies settled with California Insurance Commissioner in 2006 to put an end to the practice.

Oakland is served by several bus lines which run on 7th, 8th, 11th, 12th, Broadway, and Franklin Streets. Many visitors to the neighborhood use nearby mass transit connections. The neighborhood has two stations: 12th Street Station on its northwest corner, and Lake Merritt Station at its eastern edge.

* is a located at the south end of Chinatown. Course offerings include Asian and Asian American Studies, Chinese language, Japanese language, and Chinese Opera (Music Department).

*Cal State East Bay has the Oakland Professional Development and Conference Center at Broadway and 11th Street. courses includes a certificate program in "Teaching Chinese as a Heritage or Other Language".

*The Mun Fu Yuen "" has after school classes in Cantonese Chinese language and culture at the Oakland Chinese Community Center on 9th Street at Harrison.