Cardiolipin (IUPAC name "1,3-bis(sn-3’-phosphatidyl)-sn-glycerol") is an important component of the inner mitochondrial membrane, where it constitutes about 20% of the total lipid composition. The only other place that cardiolipin can be found is in the membranes of most bacteria. The name ‘cardiolipin’ is derived from the fact that it was first found in animal hearts. It was first isolated from beef heart in the early 1940s.[1] In mammalian cells, but also in plant cells,[2][3] cardiolipin (CL) is found almost exclusively in the inner mitochondrial membrane where it is essential for the optimal function of numerous enzymes that are involved in mitochondrial energy metabolism. 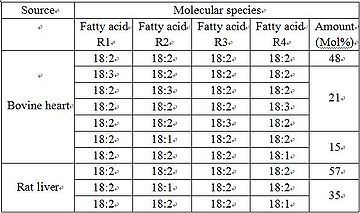 Cardiolipin (CL) is a kind of diphosphatidylglycerol lipid. Two phosphatidylglycerols connect with a glycerol backbone in the center to form a dimeric structure. So it has four alkyl groups and potentially carries two negative charges. As there are four distinct alkyl chains in cardiolipin, the potential for complexity of this molecule species is enormous. However, in most animal tissues, cardiolipin contains 18-carbon fatty alkyl chains with 2 unsaturated bonds on each of them.[4] It has been proposed that the (18:2)4 acyl chain configuration is an important structural requirement for the high affinity of CL to inner membrane proteins in mammalian mitochondria.[5] However, studies with isolated enzyme preparations indicate that its importance may vary depending on the protein examined.

Since there are two phosphates in the molecule, each of them can catch one proton. Although it has a symmetric structure, Ionizing one phosphate happens at a very different levels of acidity than ionizing both: pK1 =3 and pK2 > 7.5. So, under normal physiological conditions (wherein pH is around 7), the molecule may carry only one negative charge. The hydroxyl groups (–OH and –O-) on phosphate would form a stable intramolecular hydrogen bond with the centered glycerol’s hydroxyl group, thus forming a bicyclic resonance structure. This structure traps one proton, which is quite helpful for oxidative phosphorylation.

As the head group forms such compact bicycle structure, the head group area is quite small relative to the big tail region consist of 4 acyl chains. Based on this special structure, the fluorescent mitochondrial indicator, nonyl acridine orange (NAO) was introduced in 1982,[6] and was later found to target mitochondria by binding to CL. NAO has a very large head and small tail structure which can compensate with cardiolipin’s small tail large head structure, and arrange in a highly ordered way.[7] Several studies were published utilizing NAO both as a quantitative mitochondrial indicator and an indicator of CL content in mitochondria. However, it is found that NAO was influenced by membrane potential and/or the spatial arrangement of CL.[8][9][10] so it's not proper to use NAO for CL or mitochondria quantitative studies of intact respiring mitochondria. But NAO still represents a simple method of assessing CL content. 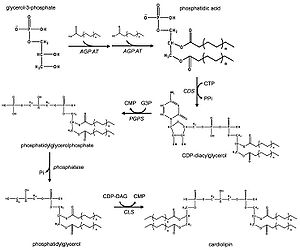 In eukaryotes such as yeasts, plants and animals, the synthesis processes are believed to happen in mitochondria. The first step is the acylation of glycerol-3-phosphate by a glycerol-3-phosphate acyltransferase. Then acylglycerol-3-phosphate can be acylated to form a phosphatidic acid (PA). With the help of the enzyme CDP-DAG synthase (phosphatidate cytidylyltransferase), PA is converted into cytidinediphosphate-diacylglycerol (CDP-DAG). The following step is conversion of CDP-DAG to phosphatidylglycerol phosphate (PGP) by the enzyme PGP synthase, followed by dephosphorylation by PTPMT1 [11] to form PG. Finally, a molecule of CDP-DAG is bind to PG to form one molecule of cardiolipin, catalyzed by the mitochondria-localized enzyme cardiolipin synthase (CLS).[2][3][12]

In prokaryotes such as bacteria, diphosphatidylglycerol synthase catalyses a transfer of the phosphatidyl moiety of one phosphatidylglycerol to the free 3'-hydroxyl group of another, with the elimination of one molecule of glycerol, via the action of an enzyme related to phospholipase D. The enzyme can operate in reverse under some physiological conditions to remove cardiolipin.

Catabolism of cardiolipin may happen by the catalysis of phospholipase A2 (PLA) to remove fatty acyl groups. Phospholipase D (PLD) in the mitochondrion hydrolyses cardiolipin to phosphatidic acid.[13] 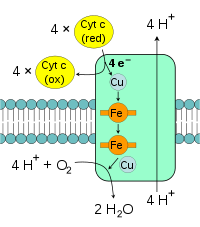 Because of cardiolipin’s unique bicyclic structure, a change in pH and the presence of divalent cations can induce a structural change. CL shows a great variety of forms of aggregates. It is found that in the presence of Ca2+ or other divalent cations, CL can be induced to have a lamellar-to-hexagonal (La-HII) phase transition. And it is believed to have a close connection with membrane fusion.[14][15]

The enzyme cytochrome c oxidase or Complex IV is a large transmembrane protein complex found in bacteria and the mitochondrion. It is the last enzyme in the respiratory electron transport chain of mitochondria (or bacteria) located in the mitochondrial (or bacterial) membrane. It receives an electron from each of four cytochrome c molecules, and transfers them to one oxygen molecule, converting molecular oxygen to two molecules of water. Complex IV has been shown to require two associated CL molecules in order to maintain its full enzymatic function. Cytochrome bc1(Complex III) also needs cardiolipin to maintain its quaternary structure and to maintains its functional role.[16] Complex V of the oxidative phosphorylation machinery also displays high binding affinity for CL, binding four molecules of CL per molecule of complex V.[17]

mechanism of how CL trigger apotosis

During apoptosis, cytochrome c (cyt c) is released from the intermembrane spaces of mitochondria into the cytosol. Cyt c can then bind to the IP3 receptor on ER, stimulating calcium release, which then reacts back to cause the release of cyt c. When the calcium concentration reaches a toxic level, this causes cell death. Cytochrome c is thought to play a role in apoptosis via the release of apoptotic factors from the mitochondria.[18] A cardiolipin-specific oxygenase produces CL hydroperoxides which can result in the conformation change of the lipid. The oxidized CL transfers from the inner membrane to the outer membrane, and then helps to form a permeable pore which releases cyt c. 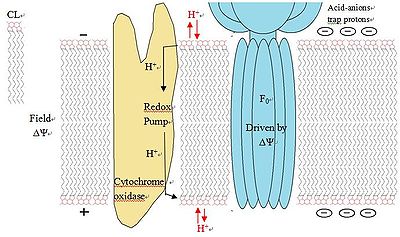 CL serves as a proton trap in oxidative phosphorylation

During the oxidative phosphorylation process catalyzed by Complex IV, large quantities of protons are transferred from one side of the membrane to another side causing a large pH change. CL is suggested to function as a proton trap within the mitochondrial membranes, thereby strictly localizing the proton pool and minimizing the changes in pH in the mitochondrial intermembrane space.

This function is due to CL’s unique structure. As stated above, CL can trap a proton within the bicyclic structure while carrying a negative charge. Thus, this bicyclic structure can serve as an electron buffer pool to release or absorb protons to maintain the pH near the membranes.[7]

Barth syndrome is a rare genetic disorder that was recognised in the 1970s to cause infantile death. It has a mutation in the gene coding for tafazzin, an enzyme involved in the biosynthesis of cardiolipin. Tafazzin is an indispensable enzyme to synthesize cardiolipin in eukaryotes involved in the remodeling of CL acyl chains by transferring linoleic acid from PC to monolyso-CL.[19] Mutation of tafazzin would cause not enough cardiolipin synthesis and thus cause not enough ATP production. Girls heterozygous for the trait are unaffected. Sufferers of this condition have mitochondria that are abnormal, and they cannot sustain adequate production of ATP. Cardiomyopathy and general weakness is common to these patients. Cardiolipin treats the symptoms of Barth syndrome and prevents infections.

Oxidative stress and lipid peroxidation are believed to be important contributing factors leading to neuronal loss and mitochondrial dysfunction in the substantia nigra in Parkinson's disease, and may play an early role in the pathogenesis of Alzheimer’s disease.[20][21] It is reported that CL content in the brain would decrease with aging.[22] and a recently study on rat brain shows it’s resulted from lipid peroxidation in mitochondria exposed to free radical stress. Another study also shows that CL biosynthesis pathway of CL may be selectively impaired and cause 20% reduction and composition change of CL content.[23] And it’s also associated with a 15% reduction in linked complex I/III activity of the electron transport chain, which though to be a critical factor in the development of Parkinson's disease.[24]

Recently, it is reported that in non-alcoholic fatty liver disease[25] and heart failure[26]， decreased CL levels and change in acyl chain composition are also observed in the mitochondrial dysfunction. However, the role of CL in aging and ischemia/reperfusion is still controversial.

Tangier disease is also linked to CL abnormalities. Tangier disease is characterized by very low blood plasma levels of high-density lipoprotein cholesterol, accumulation of cholesteryl esters in tissues and an increased risk for developing cardiovascular disease.[27] Unlike Barth syndrome, Tangier disease is mainly caused by abnormal enhanced production of CL. Studies show that there are three to fivefold increase of CL level in Tangier disease.[28] Because increased CL levels would enhance cholesterol oxidation, and then the formation of oxysterols would consequently increase cholesterol efflux. This process could function as an escape mechanism to remove excess cholesterol from the cell.

Heart disease hits people with diabetes twice as often as people without diabetes. In those with diabetes, cardiovascular complications occur at an earlier age and often result in premature death, making heart disease the major killer of diabetic people. Cardiolipin has recently been found to be deficient in the heart at the earliest stages of diabetes, possibly due to a lipid-digesting enzyme that becomes more active in diabetic heart muscle.[29]

Patients with anti-cardiolipin antibodies (Antiphospholipid syndrome) can have recurrent thrombotic events even early in their mid- to late-teen years. These events can occur in vessels in which thrombosis may be relatively uncommon, such as the hepatic or renal veins. These antibodies are usually picked up in young women with recurrent spontaneous abortions. In anti-cardiolipin-mediated autoimmune disease, there is a dependency on the apolipoprotein H for recognition.[30]

Cardiolipin from a cow heart is used as an antigen in the Wassermann test for syphilis. Anti-cardiolipin antibodies can also be increased in numerous other conditions, including systemic lupus erythematosus, malaria and tuberculosis, so this test is not specific.

Human immunodeficiency virus-1 (HIV-1) has infected more than 60 million people worldwide. Developing effective antibodies for HIV-1 becomes a hotspot in scientific research. HIV-1 envelope glycoprotein contains at least four sites for neutralizing antibodies. Among these sites, the membrane-proximal region (MPR) is particularly attractive as an antibody target because it facilitates viral entry into T cells and is highly conserved among viral strains.[31] However, it is found that two antibodies directed against 2F5, 4E10 in MPR react with self-antigens, including cardiolipin. Thus, it’s difficult for such antibodies to be elicited by vaccination.[32]

It was first proposed by Otto Heinrich Warburg that cancer originated from irreversible injury to mitochondrial respiration, but the structural basis for this injury has remained elusive. Since cardiolipin is an important phospholipid found almost exclusively in the inner mitochondrial membrane and very essential in maintaining mitochondrial function, it is suggested that abnormalities in CL can impair mitochondrial function and bioenergetics. A study[33] published in 2008 on mouse brain tumors supporting Warburg’s cancer theory shows major abnormalities in CL content or composition in all tumors.