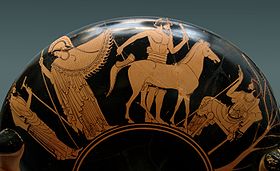 Athena in the workshop of a sculptor working on a marble horse, Attic red-figure kylix, 480 BC, Staatliche Antikensammlungen (Inv. 2650)

The origins of Greek sculpture have been ascribed the wooden cult statues that were described by Pausanias as xoana.[1] No such statue survives, and the descriptions of them are vague despite the fact that some were objects of veneration for hundreds of years. The first piece of Greek statuary to be reassembled since is probably the Lefkandi Centaur (Eretria Mus.) found on Euboia. This terra cotta statue of circa 900 BC was constructed in parts before being dismembered and buried in two separate graves. Greeks made art to show how wonderful, and beautiful the gods and goddesses are. It seeks an intentional mark on its knee - it has been postulated[2] that this indicates that the statue represents Cheiron and the wound from Herakles' arrow. If so, it would be the earliest known depiction of myth in Greek History.

The forms from the geometrical period (ca. 900 to 700 BC) were chiefly terracotta figurines, bronzes and ivories. The bronzes are chiefly tripod cauldrons and freestanding figures or groups. Such bronzes were made using the lost-wax technique probably introduced from Syria and are almost entirely votive offerings left at the Hellenistic civilization Panhellenic sanctuaries of Olympia, Delos and Delphi. These were manufactured elsewhere and a number of local styles may be identified by finds from Athens, Argos and Sparta. Typical works of the era include the Karditsa warrior (Athens Br. 12831) and the many examples of the equestrian statuette (for example, NY Met. 21.88.24 online). The repertory of this bronze work is not confined to standing men and horses however, as with the vase painting of the time we also find stags, birds, beetles, hares, griffins and lions. There are no inscriptions on early to middle geometric sculpture until the appearance of the Mantiklos "Apollo" (Boston 03.997) of the early 7th century found in Thebes. This is a standing figure of a man with an almost daedalic form with the legend "Mantiklos offers me as a tithe to Apollo of the silver bow; do you, Phoibos, give some pleasing favour in return" across his thighs in hexameter verse. Apart from the novelty of recording its own purpose this sculpture it adapts the formulae of oriental bronzes as seen in the shorter more triangular face and slightly advancing left leg. This is sometimes seen as anticipating the greater expressive freedom of the 7th century and as such the Mantiklos figure is referred to in some quarters as proto-daedalic. Later in the 1900s Greek sculpture was still bronze casts. Greek sculptures were very detailed and decorative.

The sculptor Polykleitos could be deemed as the creator of the Classical Period. He created works with a true naturalism and balance, unlike the rigid poses of the Archaic period. He was the first to use ideas of scale and mathematical proportions in order to create the perfectly proportioned figure, referred to as "The Polykleitan Canon of Proportion". Polykleitos was very influential in Greek Sculpture, his realistic proportions were recognized by other sculptors such as Skopas and Lysippos who successfully followed him using the ideas set out in his canon.

Lysippos was the successor of Polykleitos; he took the ideas used in creating perfect proportions and gave rise to the "Lysippan Canon of Proportion". Lysippos noted a greater realism could be captured in making the heads of his figures smaller as well as elongating the body, creating much more realistic sculptures; which was his primary aim. His scrutinising attention to detail emphasised this desire to make his sculptures as realistic as possible. This sense of realism brought about the transition into the Hellenistic Period where use of the Lysippan canon of proportion and Contrapposto created extreme realism.

Creating realistic proportions was not the only way used to create statues as life like as possible. A perfectly proportioned figure will still look unnatural if in a rigid and unrelaxed pose. In the late classical period a combination of Contrapposto and "in the round" compositions (intended to be seen from multiple angles) created more interesting and natural poses. This was sparked by the sculptor Praxiteles, with his creation of the "Praxitelean curve" or Contrapposto. His fundamental aim was to create fluidity within the pose by changing from the conventional parallels of the shoulders, hips and knees to sloping angles. These angles, as seen in figures such as "Kritios Boy"- Early Classical Sculpture- and "Venus Braschi" (the first female nude) were much more comparable to the anatomy in real life, further emphasising naturalism and movement. This was a major step towards the extreme realism of the Hellenistic period.

Mostly marble and bronze were used in Greek sculpture. Although it was initially thought that Greek statues were mostly unadorned white marble, by the early 19th century the systematic excavation of ancient Greek sites brought forth a plethora of sculptures with traces of multicolored surfaces. Some of these traces are still visible to the naked eye even today, though in most examples the remaining color has faded or disappeared entirely once the statues were exposed to light and air. In spite of this overwhelming evidence for painted statues, influential art historians such as Johann Joachim Winckelmann so strongly opposed the idea of painted Greek sculpture that proponents of painted statues were dismissed as eccentrics and their views largely dismissed for several centuries. It wasn't until published findings by German archaeologist Vinzenz Brinkmann in the late 20th century and early 21st century that painted Greek sculptures became an established undeniable fact. Using high intensity lamps, ultraviolet light, special cameras, plaster casts and certain powdered minerals, Brinkmann was able to scientifically prove that the entire Parthenon, including the actual structure as well as the statues, was in fact painted. He furthermore was able to reveal the pigments of the original paint and has created several painted replicas of Greek statues that are currently on tour throughout the world. Also in the collection, are replicas of works from other Greek and Roman sculptures showing that the practice of painting sculpture was widespread and in fact the normative practice rather than the exception in Greek and Roman culture. Museums to host the exhibit include the Glyptothek Museum in Munich, the Vatican Museum, and the National Archaeological Museum in Athens among others. The collection made its United States debut at Harvard University in the Fall of 2007.[3] [4]