:"This article is on the 1994 film. For other adaptations of the Dumas novel, see "."Infobox Film
name = Queen Margot
(La Reine Margot) 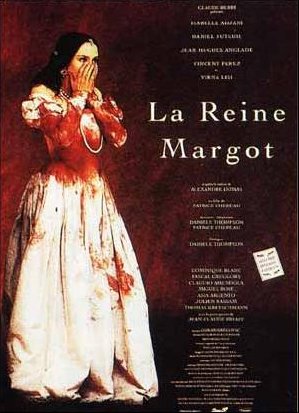 "La Reine Margot" is a 1994 based on the historical novel of the same name by . It was released in the under its original French title, and as "Queen Margot" in . The film was directed by .

stars as , better known as Margot, daughter of scheming power player (). Although Margot herself is excluded from the throne by the , her marriage to a prince offers a chance for domestic reconciliation during the late reign of the neurotic, King Charles IX (), a time when Catholics are vying for political control of France with the French Protestants, the . Catherine decides to make an overture of goodwill by offering up Margot in marriage to prominent Huguenot and King of Navarre, Henri de Bourbon (), although she also schemes to bring about the notorious of , when thousands of Protestants are slaughtered. The marriage goes forward but Margot, who does not love Henri, begins a passionate affair with the soldier La Môle (), also a Protestant from a well-to-do family. Murders by poisoning follow, as court intrigues multiply and Queen Catherine's villainous plotting to place her son, the future Henry III () on the throne threatens the lives of La Môle, Margot and Henri.

The film was an made by several companies based in , , , with the additional participation of and the American company , and the support of .

The film won 5 s and two awards at the . It was nominated for the .

The film's original running time was 161 minutes in its premiere at the and in its French theatrical release. However, its American distributor, , asked the director to re-edit the movie to 145 minutes, and this version was the version seen in cinemas outside France and later on video. The full-length version was available for a limited period in the on in a collectors' edition box set in 1995, but all further releases, including the DVD, have used the 145 minute cut.

The re-edited version not only removed scenes, it also added a scene between Margot and La Môle, in which they stand outdoors wrapped in a red cloak. The director had cut this scene from the original 'full-length' version. The scene was re-inserted because Miramax insisted that the relationship between the two characters be more substantial, as the romance was to become the focal point for the American marketing campaign. The 'red cloak' scene appears on the US DVD cover. In contrast the European DVD cover uses the original poster, showing a shocked Margot bespattered with blood.