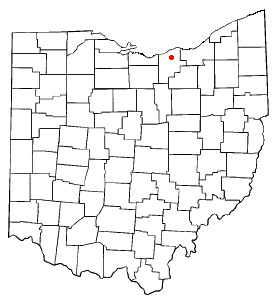 Elyria is a city in the of and the of Lorain CountyGR|6. The municipality is located in northeastern Ohio at the forks of the Black River founded in 1817. As of the 2000 census, the city had a total population of 55,953. Elyria was founded by Herman Ely. [http://www.cityofelyria.org/ElyriaHistory.html] . The current mayor of Elyria is William M. Grace. The city is home to .

Elyria was founded in 1817 by Heman Ely, who built a log house, dam, gristmill, and sawmill on the site. Ely began to build more houses to accommodate immigrating settlers. By the time Ely died in 1852, Elyria had 5 churches, 3 grocery stores, 3 flour mills, a newspaper, and a population of more than 1,500. As the 1900s arrived, Elyria was a small town of about 8,000. In 1908, was built and has since evolved into an award-winning regional healthcare system. In August 1967, Midway Mall was opened and changed the face of the local economy as local businesses either moved into the mall or closed down. [http://elyriapride.elyria.com/ehistory.htm]

Elyria has an extensive, although financially burdened, community food pantry and "Hot Meals" program administered through several churches and the Second Harvest Food Bank. Hot Meals feeds an average of more than 125 people a night, a portion of which are homeless. [http://secondharvestfoodbank.org/member-agencies/agency-information/current-agencies/] The Elyria High School Pioneer Marching Band is also a source of pride for the community.Elyria is served by as a main hospital.

Elyria has a large number of parks and recreational centers that include a variety of activities such as baseball, playground equipment. The 4 recreational centers are named after their location on the map - North, East, South, and West. They each include one or more s and at least 2 . There are two main parks, Cascade and Elywood, which are connected by a drive-on ford in the center.

Cascade Park is the largest and most popular park in Elyria. The park is located in a ravine carved by the same s that created the . Cascade park has a large playground and a large hill used for seating at the 4th of July fireworks show, and is a popular spot for during winter months. The Black River winds through the center of the park and can be viewed throughout the park at various locations.There is also a short hiking trail that winds through a portion of the park bringing you past one of two waterfalls and many large rock formations. In many cases there are carved foot holes, hand holes and steps in the rock formations allowing further exploration of the environment by the young at heart. The most popular rock to climb is the first rock at the entrance of the trails. It has footholes and handholes up the side and steps in order to get to the flat side where people love to climb up and relax, enjoying the scenery. The most famous rock is the infamous rock which has Pink Floyd spray painted on it.

Elyria is home to many businesses and several worldwide headquarters. , a world leader of mobility care, is headquartered in Elyria along with Tool, Diamond Products, Bendix Commercial Vehicle Systems, and Elyria Manufacturing Corp. Elyria's is a local hub for shopping. Major stores include Sears, , , and . A Wal-Mart Supercenter, currently one of the largest in the nation at convert|207000|sqft|m2|abbr=on. [http://www.chroniclet.com/2007/04/17/wal-mart-of-a-different-stripe/] [http://www.walmartfacts.com/articles/4957.aspx] , opened as a hub of the Chestnut Commons retail complex in 2007. In addition, the smaller, traditional-style Wal-Mart near Midway Mall will be replaced with a nearby convert|187000|sqft|m2|abbr=on. Supercenter, scheduled to open in the Spring of 2008 [http://www.chroniclet.com/2007/04/13/wal-mart-unveils-mall-area-store-plans/] . Other large commercial establishments include Target, , and . Also there are many small businesses that are located in the Midway Mall and also in Downtown Elyria.

is based in Elyria. Elyria is served by many highways, including , the , and State Routes 2 and 57. The general aviation airport for Elyria and Lorain is the Lorain County Regional Airport (located in New Russia Township), and is the nearest major airport. The Elyria Amtrak Station provides train transportation.

In the early 1900s, Elyria had a trolley system that helped bring residents to and from work and shopping centers in downtown. Horse-drawn carriages were a popular form of transportation, since cars were available but scarce. In 1907, the number 123 trolley car collided with the number 129 car killing 6 people. was built in response to the crash. Elyria also built the New York Central Depot hub to connect Elyria to other cities, but this was soon abandoned and is now in the process of being renovated for use again by Lorain County.