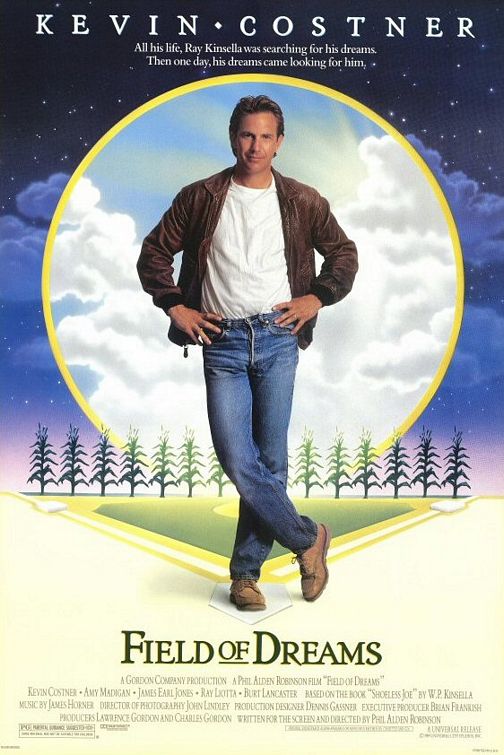 "Field of Dreams" was nominated for for Best Music, Original Score, Best Picture and Best Writing, Screenplay Based on Material from Another Medium.

*"Ray Kinsella spent half his life searching for his dreams. Then, one day, his dreams came looking for" him.
*"If you believe the impossible, the incredible can happen."

Ray Kinsella () is a novice farmer who becomes convinced by a mysterious voice that he is supposed to construct a baseball diamond in his corn field. The film's underlying themes are the fulfillment of dreams, and how people can overcome any regrets they may have about the life choices they make.

Kinsella lives in rural with his wife, Annie (), and their young daughter Karin (). Ray's deceased father, John Kinsella () loved baseball, the , and (), who was banned from baseball for his part in throwing the . His father, though, seemed "worn down" by life.

While walking through the cornfield, Ray hears a voice whisper, "If you build it, he will come." He imagines a baseball field in his cornfield. Annie is skeptical but she tells him to follow his vision. He works on the field for the next couple of days, hoping to find out what will happen. Neighbors stop along the road to watch and heckle as he plows under the corn. He waits all year to see whatever happens. Nothing happens, leaving Ray dejected and confused.

One night the next summer, Shoeless Joe Jackson appears in left field. An astonished Ray comes out to the field to hit him some fly balls and pitch to him. Joe is thrilled to have a field on which to play, and asks if he can bring some friends. The next time he returns, he brings the other players banned in the 1919 Black Sox scandal. All of these players are long dead, but it is unclear if they are ghosts or if they have been brought back to life. Soon after Ray is told by his brother-in-law Mark, who is unable to see the players, () that unless he gets rid of the baseball field and returns it to farmland, he will go bankrupt.

Ray hears the voice again, which prompts him to contact 1960s author Terence Mann (), who had once written about the golden days of baseball. He wrote that as a child he dreamed of playing for the Dodgers on . He goes to Boston to find Terence and bring him to a game, which he envisioned in a dream one night. At the game, Ray sees a message on the scoreboard telling him to find a 1920s ballplayer named Archibald "Moonlight" Graham ().

Ray and Terence travel to , Moonlight's hometown, to find him. The first place they check is the office of the local paper, but one of the researchers there tells them he's been dead since 1972. A confused Terence and Ray return to their motel room, wondering how to find Moonlight. Ray decides to go out for a walk. During the walk, he discovers that he has somehow been transported back in time to 1972. He quickly finds Moonlight, who has been working as a doctor since his brief time in the major leagues. When he asks why he left baseball for medicine, Graham answers that he'd rather save lives as a medical doctor than scrounge through the minor leagues again.

When Ray comes back to the real world, he and Terence return to Iowa. On their way, they pick up a young hitchhiker. After a brief discussion of how the man is trying to find a way to play professional baseball, the young man introduces himself as Archie Graham () - the young Moonlight. The three return to the farm, where Moonlight begins to play with the other ghosts. More baseball players have appeared in Ray's absence, and Moonlight is having a great time playing, while also being razzed by the veteran players about his youth and enthusiasm. Moonlight finally gets his at-bat, a fly ball to the outfield that scores a run. Interestingly enough, though he does have a plate appearance, he would still not be credited with an "official" at-bat, since a fly ball to the outfield that scores a run is not recorded as an official at-bat for the hitter, but as a sacrifice fly. Thus Moonlight was able to re-live his dream, but keep the dubious distinction of no "official" at-bat in the majors in his only appearance.

During an argument between Ray and Mark, who is forcing him to lease the property before it's too late, Karin falls off the . Karin appears to be not breathing. Moonlight quickly runs to help, but hesitates to leave the baseball field. He does step off the field, instantly becoming the old doctor Ray met in Chisholm. Graham recognizes that Karin is choking, and administers some quick CPR, holding her steady and pounding her on the upper back, causing her to cough up the piece of hot dog that had blocked her airway. Ray realizes that Graham's decision means he cannot return to the field as his younger self, and apologizes to the doctor. Moonlight assures Ray that it's alright, and thanks him for his chance. He walks out into the ballfield toward the cornfield, the players now addressing Graham with subdued, respectful voices. Terence and Karin persuade Mark that tourists will pay admission to see the magic of this field to bring back memories of the game. Having been able to see Archibald saving Karin from choking, he believes them and tells Ray that he must not sell the farm.

At the end of the day, the players head for the cornstalks in the outfield. Just before vanishing, Shoeless Joe asks Terence if he will come with them. An angry Ray demands to know why he can't go. Terence persuades him that he has to stay behind to take care of his family. After saying goodbye, Ray tells Terence that once he gets back he wants a full description, Terence smiles and walks into the cornstalks and disappears.

Shoeless Joe then tells Ray, "If you build it, HE will come", and glances toward a player near home plate in catcher's equipment. The player removes his mask, and Ray recognizes his father, John, as a young man. At his wife's urging, Ray introduces John to his granddaughter, Karin, catching himself before telling Karin who he is, and simply introducing him as "John". As his father is heading toward the outfield, to leave with the rest of the players, Ray asks his father to play catch, finally calling him "Dad", as father and son choke back tears. As they play catch, a long line of cars begin approaching the baseball field - people coming to watch the game.

The character played by Burt Lancaster and Frank Whaley, Archibald "Moonlight" Graham, is based on a real baseball player of the same name. The character is largely true to life, excepting a few factual liberties taken for artistic reasons.

The author Terence Mann (James Earl Jones) is fictional but inspired by the life of reclusive author . Salinger is the author sought by the main character in the original novel. In 1947, Salinger wrote a story called "", featuring a character named Ray Kinsella. Later, Salinger's most famous work, "", features a minor character named Richard Kinsella, a classmate of the protagonist, Holden Caulfield, who digresses a lot in an "Oral Composition" class. (Richard Kinsella is the name of Ray's twin brother in the original novel.)

Except for a few location shots for Boston, notably , much of the film was shot in and around [cite web | url = http://www.imdb.com/title/tt0097351/locations | title = Filming locations for Field of Dreams (1989) | publisher = | accessdate = 2007-08-29 ] . The home (then and now a private residence) and field were on adjoining farms near . The baseball field built for the film has become an attraction with the same name.

Other places used in the film are:
* :
** - Kevin Costner's character Ray looks up information on Terence Mann in the school library. When Ray and Annie are walking to their truck Blades Hall and the Van Vliet main administration building are shown.
** Hendricks Feed. The store where Ray purchases supplies is located on Central Avenue in downtown Dubuque.
** Terence Mann's apartment and neighborhood was located near 17th Street and Central Avenue in Dubuque, although the scene is set in Boston.
** Airline Inn. This roadside motel is about three miles south of Dubuque along US Highways 61/151. This is the motel where Ray and Terence stayed while traveling to Minnesota.
** Martin's gas station. The gas station where Ray gets directions to Terence Mann's place was located at the southeast corner of the intersection of W. 3rd and Locust Streets in Dubuque. The gas station has since been demolished.
** . In one of the scenes cut from the final movie (outtakes available in the 15th Anniversary Commemorative DVD), Ray buys equipment at a local sporting goods store and discovers its employees are the first people who don't think he's crazy. Zehentner's was located near 9th and Main, and is now closed after 60 years in business at that location.
* . The PTA meeting dealing with Terence Mann's books was at Western Dubuque Elementary/Jr. High School, in Farley.
* - Galena was used to represent parts of .
* Local Dubuque attorneys Dan McClean and Bill Conzett were featured in the kitchen scene as Timothy Busfield's partners. The two lawyers, playing bankers, were the only two "bad guys" in the film.

The film used local roads quite extensively to represent the drive from Dyersville to Boston, Boston to Chisholm, and Chisholm to Dyersville. The following are some of the local roadways used:

* near . Where the first scenes from Dyersville to Boston were shot.
* in , near the campuses of and , and the street where the and the site of the first world series game can be found. As Ray drives along this heavily traveled road that leads into downtown , he rehearses how he will greet Terence Mann.