Ordnance Survey Ireland (OSi; Irish: Suirbhéireacht Ordanáis Éireann) is the national mapping agency of the Republic of Ireland and, together with the Ordnance Survey of Northern Ireland (O.S.N.I.), succeeded, after 1922, the Irish operations of the United Kingdom Ordnance Survey. It is part of the Public service of the Republic of Ireland. The OSi have made modern, as well as historic, maps of the state free to view on their website. The OSi is headquartered at Mountjoy House in the Phoenix Park in Dublin. Mountjoy House was formerly the headquarters, up until 1922, of the Irish section of the British Ordnance Survey.

Under the Ordnance Survey Ireland Act 2001 [1] the status of the former Ordnance Survey of Ireland was changed from an executive agency of the Department of Finance to a State Agency called Ordnance Survey Ireland, and ceased to be part of the Civil service of the Republic of Ireland. OSi is now an autonomous agency, with a remit to cover its costs of operation from its sales of data and derived products, which has, sometimes raised concerns about the mixing of public responsibilities with commercial imperatives. It employs 320 staff located in Dublin’s Phoenix Park and in six regional offices in Cork, Ennis, Kilkenny, Longford, Sligo and Tuam.[2] OSI had sales in 2010 of € 20.3 million.

The body is governed by a Board appointed by the Minister for Finance.

The most prominent consumer publications of OSi are the "Dublin City and District Street Guide", an atlas of Dublin city, and the "Complete Road Atlas of Ireland" which it publishes in co-operation with Land and Property Services Northern Ireland (formerly the Ordnance Survey of Northern Ireland). The board also publishes (jointly with OSNI) a series of 1:50000 maps of the entire island known as the "Discovery Series"[3] and a series of 1:25000 maps of places of interest (such as the Aran Islands and Killarney national park) and the Geology of Ireland.[4] 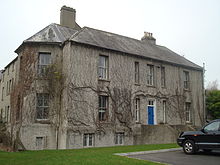 The Irish Survey was established in 1824, along similar lines to the Ordnance Survey in Great Britain, to provide a highly detailed (1:10560, 6 inches to 1 mile) survey of the whole of the island of Ireland, a key element in the process of equalising local taxation.

From 1825-46, teams of surveyors, led by officers of the Royal Engineers and men from the ranks of the Royal Sappers and Miners, traversed Ireland, creating a unique record of a landscape undergoing rapid transformation. The resulting maps, which many consider beautiful, (primarily at 6″ scale, with greater detail for urban areas, to an extreme extent in Dublin) portrayed the country in a degree of detail never attempted before, and when the survey of the whole country was completed in 1846, it was a world first. Both the maps and surveying were executed to a the high degree of engineering excellence available at the time, using triangulation and with the help of tools developed for the project, most notably the strong "limelight." The concrete triangulation posts built on the summits of many Irish mountains can still be seen to this day.

The Engineer officers in charge of the operation were Lt-Colonel Thomas Colby, a long-serving Director-General of the Ordnance Survey, and Lieutenant Thomas Larcom. They were assisted by George Petrie, who headed the Survey's Topographical Department which employed the likes of John O'Donovan and Eugene O'Curry in scholarly research into placenames. Captain J.E. Portlock compiled extensive information on agricultural produce and natural history, particularly geology.

This "mapping scheme" provided numerous opportunities for employment to the native Irish people, both as skilled or semi-skilled fieldwork labourers and as clerks in the subsidiary Memoir project that was designed both to illustrate and complement the maps by providing hard data on the social and productive worth of the country.

The original survey was later revisited and revised maps issued on a number of occasions. All of these historical maps (at least up to 1922) are in the public domain and while the originals can be hard to find, they can be freely reproduced.

OSI was initially part of the army under the Department of Defence. All staff employed were military until the 1970s when the first civilian employees were recruited.[5]

In more recent times, the Ordnance Survey of Ireland replaced traditional ground surveying with mapping based primarily on aerial photography. It has also worked with An Post to gather and structure geographic data.

The Ordnance Survey of Ireland carried out between the years 1825 and 1846 is main focus of the 1981 play by Brian Friel, Translations. The primary theme is the inscription of place names in an anglicised form, using a phonetic rendering for British Anglophone ears of an approximate Gaelic pronunciation.