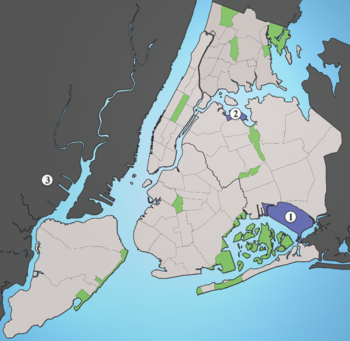 None of these airports are directly served by the area's commuter rail and subway systems and LaGuardia has no rail service at all.

Both JFK and LaGuardia are located in the New York City borough of Queens while Newark Liberty is located in Newark, New Jersey. Smaller airports around New York City include Long Island MacArthur Airport in Islip, Westchester County Airport in White Plains and Stewart International Airport in Newburgh.

JFK and Newark Liberty Airports are served, respectively, by two short rail lines both known as AirTrain that connect to other nearby transportation systems. AirTrain Newark is a light monorail whose railcars can never travel on the existing infrastructure of commuter or rapid transit lines, while AirTrain JFK is capable of handling heavy rail subway trains and could, in theory, send railcars onto rapid transit or commuter rail tracks. All three airports have connecting bus service to other transit.

AirTrain JFK provides rail service to JFK via two transfer stations. One branch runs to Jamaica and the other to Howard Beach, which is served at all times by the A train.

The Jamaica AirTrain terminus is part of a large transportation complex that includes many connections:

The Howard Beach AirTrain terminus is right above Howard Beach – JFK Airport on the IND Rockaway Line of the New York City Subway.

All of these AirTrain connections and Penn Station are handicapped accessible; however many other area stations are not. For more information, see New York City Subway accessibility and Long Island Rail Road accessibility.

AirTrain costs $5 per ride, the subway costs $2.25, and the LIRR to anywhere with New York City except Far Rockaway costs $8 during peak hours, $5.75 at other weekday times, and $3.50 on weekends (with the CityTicket pilot program). Fares can be paid with MetroCards, available from vending machines at the AirTrain termini. Costs and typical travel times are as follows:[2][3]

Various MTA Regional Bus (New York City Bus and MTA Bus) connect to the Subway and Long Island Rail Road with free transfers provided for Subway connections. The buses are handicapped accessible, but connections may not be. All three bus routes provide 24 hour service to and from their respective areas. Most enter the airport on Van Wyck Expressway, with the only passenger terminal stop at the International Arrivals building (Terminal 4).

The B15, operated by MTA New York City Transit, takes a long route through sections of Conduit Avenue and New Lots Avenue, ending at Woodhull Hospital in Brooklyn. It passes the following rail stations (in order from JFK):

The Q10, operated by MTA Bus Company, runs mainly via Lefferts Boulevard to Kew Gardens, with the following transfers along the way (in order from JFK):

Limited stop service also runs weekdays, Saturdays and Sundays from 7am to 8pm.

The Q6, operated by MTA Bus Company runs to Jamaica from the post office via Rockaway and Sutphin Bouelvards, with the following transfers along the way (in order from JFK):

The Q7, operated by MTA Bus Company runs to East New York from the cargo area via Rockaway Boulevard and Pitkin Avenue, with the following transfers along the way (in order from JFK):

New York City's yellow cabs, regulated by the New York City Taxi and Limousine Commission, offer a flat rate service of $45 (as of 2006) from JFK airport to Manhattan, excluding tips and tolls. This flat rate is in effect either way between Manhattan and JFK.[4]

New York Airways provided helicopter service from the Pan Am Building through the 1970s. With the cessation of services by US Helicopter in September 2009, there have been no scheduled links from the Downtown Manhattan Heliport and East 34th Street Heliport to any New York City airports.

JFK Express, advertised as The Train to The Plane, was a service of the New York City Subway from 1978 to 1990. It ran from midtown Manhattan (later Long Island City, Queens) to downtown Brooklyn, making stops along the way, and then made no stops between Downtown Brooklyn and Howard Beach – JFK Airport, where a bus connected to the airport.

LaGuardia (LGA) is the only one of the three main airports with no rail service, though early plans for AirTrain JFK would have taken it north past Jamaica to LaGuardia. Thus the only public transportation is provided by buses. There were plans to extend to BMT Astoria Line to the airport, but this was scrapped in 2003 due to opposition from residents of Astoria, New York [5].

The following city buses connect to the New York City Subway and Long Island Rail Road, with free transfers provided for subway connections. The buses are handicapped accessible, but connections may not be.

The M60, operated by MTA New York City Transit, runs from LGA to the Upper West Side, Manhattan via Astoria Boulevard, the Robert F. Kennedy Bridge and 125th Street, with the following transfers along the way (in order from LGA):

The Q33, operated by MTA Bus Company, uses mainly 82nd Street and 83rd Street between LGA and Jackson Heights. The following transfers are available (in order from LGA):

The Q47, operated by MTA Bus Company, uses mainly 73rd Street and 74th Street between LGA and The Shops at Atlas Park. The following transfers are available (in order from LGA):

The Q48, operated by MTA New York City Transit, runs via Ditmars Boulevard and Roosevelt Avenue to Flushing. The following transfers are available (in order from LGA):

The Q72 operated by the MTA Bus Company runs via 94th Street and Junction Boulevard through East Elmhurst to Rego Park. The following transfers are available (in order from LGA):

AirTrain Newark originally served as a circulator between terminals, but on October 21, 2001, the extension to the new Newark Liberty International Airport station on the Northeast Corridor opened. As the station serves only airport traffic, AirTrain fare is included in rail fare, except for monthly pass holders, who pay $5.50 to ride AirTrain. New Jersey Transit and Amtrak serve the station, both going to various New Jersey points as well as New York Penn Station.

On December 8, 2005, the Port Authority announced that an extension of the PATH system to Newark Airport was included in its 2006–2015 Strategic Plan.[6] The estimated cost of $550 million is not yet budgeted.

The 37 runs between EWR and Ivy Hill in southwestern Newark via Lyons Avenue, passing the following rail stations and other major points (in order from EWR):

The 40 runs between North Arlington and Jersey Gardens in eastern Elizabeth, passing the following rail stations and other major points (from north to south):

While the #40 bus does not directly serve the main terminals, it stops at the 'North Area' bus stop (on U.S. Route 1/9) which adjoins long-term parking lot P6. The free P6 shuttle bus connects from this parking lot to the terminals.

The 62 runs between downtown Newark and downtown Perth Amboy, passing the following rail stations and other major points (from north to south):[7]

The 67 runs between downtown Newark (some trips extend to Journal Square, Jersey City and a few to Lincoln Harbor, Weehawken) and Toms River. Only some trips stop at EWR, passing the following rail stations and other major points (from north to south):

The 107 runs between South Orange and the Port Authority Bus Terminal in Midtown Manhattan. Only some trips stop at EWR, passing the following rail stations and other major points (from west to east):

NJ Transit does not allow travel from Airport Terminals to New York on this route. Passengers must use Olympia Bus Lines or take ground transportation to the North Area bus stop.

Ronkonkoma on the Long Island Rail Road's Ronkonkoma Branch is 1.5 miles away from this airport and numerous Taxicab services connect the airport with this station in addition to the shuttle bus operated by the Colonial Transportation company and Suffolk Transit's S57 route. The S57 route also connects the airport with Sayville, New York and the Smith Haven Mall in Lake Grove, New York.[8]

The Bee-Line Bus System serves the airport through its 12 route, connecting it with Armonk and White Plains.[9]

Currently, the airport is only served by bus and taxi service. The only regularly scheduled service to the airport is provided by Leprechaun Lines' The Link, which links the Metro-North station in Beacon, New York to Downtown Newburgh, terminating at the airport.[10]