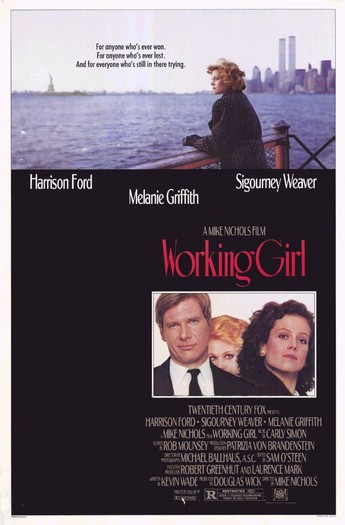 "Working Girl" tells the story of a -raised , Tess McGill, working in the department of a . When her boss, Katharine Parker, breaks her leg skiing, Tess uses her absence and connections, including Parker's errant beau Jack Trainer, to put forward her idea for a merger deal.

The movie was written by and directed by . It features a dramatic opening sequence following -bound commuters on the accompanied by 's song "," for which she received the .

Tess McGill is an intelligent, working-class woman who has recently received a night school business degree. Her goal: to move out of the typing pool and into the executive suite. As she turns 30, her dream remains unrealized. After being misled into thinking her boss is getting her a better job, Tess finds herself set up as a sexual plaything for arbitrage expert Bob Speck, and promptly quits after publicly calling her boss a pimp.

Assigned as secretary to Katharine Parker, Tess is encouraged to share any good ideas. Tess suggests that Trask Industries, one of the firm's clients, invest in radio instead of television, where it can gain more of a foothold on the market. When Katharine tells her she will help, Tess begins to feel her luck is finally changing. However, when Parker breaks her leg on a skiing trip in Europe, she asks Tess to house-sit for her. While at Katharine's, Tess accidentally finds evidence that Katharine was planning to steal Tess's idea. When Tess returns home, she finds her boyfriend Mick in bed with another woman. Disillusioned with Katharine and disgusted with Mick, she returns to Katharine's place and begins to hatch her own plan.

The next day, Tess calls executive Jack Trainer, using her boss' name as an entree. She tells Trainer that she has a proposal to run by him and sets up a meeting. The evening before the meeting, Tess attends a merger party (wearing a sophisticated new hairstyle and an expensive cocktail dress of Katharine's). To calm her nerves beforehand, she takes a Valium from Katherine's medicine cabinet. At the party, she unknowingly encounters Jack, who never mentions his name. They have a few drinks together, but Tess passes out thanks to the combination of alcohol and pills. Jack takes her to his place in a cab; Tess wakes up the next morning in her underwear and leaves before Jack awakens. On entering the meeting, she realizes who Trainer is. She submits her proposal to him but his colleagues seem uninterested. Returning to her own office, Tess cries to her best friend Cyn that she at least gave it a shot and is mortified about the previous evening. Jack arrives and Cyn (at Tess's frantic request) pretends to be Tess's secretary. Jack announces they will proceed with Tess's pitch.

At Cyn’s engagement party, Mick and Tess officially break up. Days later, Tess and Jack crash Oren Trask's daughter’s wedding, intending to make an appointment and pitch their plan. They succeed and meet with two of his employees. Trask is interested. Back at Jack's apartment, the pair end up in bed together. When Tess learns of Jack's relationship with Katharine, she decides not to tell him the truth about herself. On the day of the Trask meeting, Katharine returns, enlisting Tess's aid as her personal assistant at home. At Katharine's insistence, Jack visits but extricates himself quickly seeing Katharine has marriage on her mind. Tess, who was hiding in the closet, emerges after he leaves, gives Katharine her pills and rushes out of the apartment, accidentally leaving her Daytimer behind. Katharine reads it and discovers what Tess has been up to.

At the meeting for the Trask/Metro merger, Jack and Tess realize they're in love. Katharine soon barges in, accusing Tess of stealing her idea, and announces that she is, in fact, just a secretary. Tess is unable to make the others understand that Katharine is the liar. Back at the office, Tess packs her belongings. She bumps into Jack, Katharine and Trask in the lobby. As Katharine tries to lead the group onto the elevator, Jack refuses to come, stating that Tess is this team's leader and he believes her. He and Tess convince Trask that Katharine has been lying (by asking Katherine to recall what gave her the idea for the merger, which, of course, she cannot). Trask assures Katharine she will lose her job over this duplicity, and offers Tess an "entry-level" job, which she happily accepts.

Tess moves in with Jack. Arriving at Trask Industries, she sees a woman in an office on the phone, and presumes she once again is just a secretary. It is quickly revealed that the woman is, in fact, Tess’s secretary. Once alone, Tess calls Cyn telling her the good news, then Cyn shouts to everyone that Tess has finally made it out of the typing pool.

* was brought in as a last-minute replacement for another actor in the part of Bob Speck.

* When Tess goes to meet Katharine Parker on the helipad, she is carrying a stuffed gorilla, a direct reference to the film "", a film that Sigourney Weaver had finished a few months earlier.

* The movie is 's screen debut. He appears in two scenes; once at Tess's birthday party at her apartment and later at Cyn's engagement party. This is also 's first screen role.

* While at the wedding, Harrison Ford asks a bridesmaid who Oren Trask is dancing with, the part of the bridesmaid is played by .

Many scenes were shot in the New Brighton section of in .

The lobby of Tess's office building was that of the now-destroyed . The scenes of Tess's and Katharine Parker's office were filmed at at the corner of Whitehall and State Street. was featured at the end as the The Trask Industries building. [http://www.fast-rewind.com/workinggirl.htm] [http://www.couleurnewyork.com/films/Workinggirl.htm]

"Working Girl" was released on DVD on , . The film was presented in anamorphic widescreen in its original 1.85:1 aspect ratio.

The film was rated by the . Mainly for: Some Sexual Content/Nudity, Brief Drug Use and Language.

"Working Girl" was also made into a short-lived television series in 1990, starring as Tess McGill. It only lasted 12 episodes.