The Duchy of Mantua was a duchy in Lombardy, Northern Italy, subject to the Holy Roman Empire.

After the fall of the Western Roman Empire, Mantua was invaded by Byzantines, Longobards and Franks. In the 11th century it became a possession of Boniface of Canossa, marquis of Toscana. The last ruler of the family was the countess Matilde of Canossa (died 1115), who, according to legend, ordered the construction of the precious Rotonda di San Lorenzo (1082). After the death of Matilde of Canossa, Mantua became a free commune and strenuously defended itself from the Holy Roman Empire in the 12th and 13th centuries.

During the Investiture Controversy, Pinamonte Bonacolsi took advantage of the chaotic situation to seize power — as Captain General of the People — in 1273. His family ruled Mantua for the next century, making it more prosperous and artistically beautiful.

Ludwig II receiving the news of his son Francis being elected cardinal, fresco by Andrea Mantegna in the Stanza degli Sposi of the Palazzo Ducale

On 16 August 1328, the last Bonacolsi, Rinaldo, was overthrown in a revolt backed by the House of Gonzaga, a family of officials, namely the 60-year-old Luis and his sons Guy, Filippino and Feltrino. Luis Gonzaga, who had been podestà of the city in 1318, was elected People's Captain. The Gonzaga built new walls with five gates and renovated the architecture of the city in the 14th century, but the political situation in the city did not settle until the third Gonzaga, Ludwig I, eliminated his relatives, seizing power for himself. Through a payment of 120,000 golden florins in 1433, John Francis was appointed marquis of Mantua by Emperor Sigismund, whose niece Barbara of Brandenburg he married. In 1459 Pope Pius II held a diet in Mantua to proclaim a crusade against the Turks. 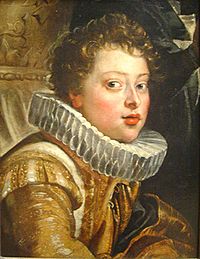 The first duke of Mantua was Frederick II, who acquired the title from Charles V, Holy Roman Emperor in 1530. The following year, the family acquired the Marquisate of Montferrat through marriage. Federico commissioned Giulio Romano to build the famous Palazzo Te, in the periphery of the city, and profoundly improved the urbanistic assets of the city.

In 1624, Francis IV moved the ducal seat to a new residence, the Villa della Favorita, designed by the architect Nicolò Sebregondi.

In 1627, the direct line of the Gonzaga family came to an end with the vicious and weak Vincent II, and the town slowly declined under the new rulers, the Gonzaga Nevers, a cadet French branch of the family. The War of the Mantuan Succession broke out, and in 1630 an Imperial army of 36,000 Landsknecht mercenaries besieged Mantua, bringing the plague with them. Mantua never recovered from this disaster.

Duke Ferdinand Charles, an inept ruler whose only aim was to hold parties and theatrical representations, allied with France in the War of the Spanish Succession. After the latter's defeat, he was declared deposed by Emperor Joseph I and took refuge in Venice, carrying with him a thousand pictures. At his death, in 1708 his family lost Mantua forever in favour of the Habsburgs of Austria. Montferrat's territories were ceded to the Duke of Savoy, and the emperor compensated the Duke of Lorraine, heir in female line of the Gonzaga, for the loss of Montferrat by ceding him the Duchy of Teschen.

Mantua was briefly united with the Duchy of Milan by an edict of Emperor Joseph II on 26 September 1786, but later restored in its separated administration by Emperor Leopold II on 24 January 1791. Mantua was besieged by Napoleon's French army in 1796, before falling in 1797. With the Treaty of Campo Formio, Mantua was annexed to the Cisalpine Republic becoming the Department of Mincio.

The Duchy of Mantua then fell to the junior branch of the Gonzagas, the Dukes of Nevers.