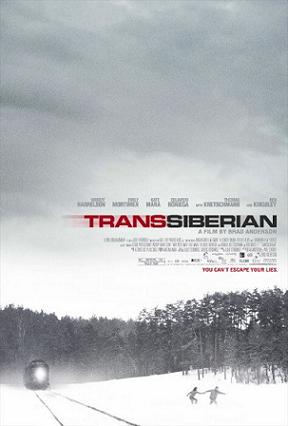 "Transsiberian" is a neo-noir thriller directed by Brad Anderson, which premiered at the on , and began its theatrical release on July 18, 2008 in New York City.

Written by Anderson and , the film stars , , Eduardo Noriega, , , and . The film is set on the , a railroad that runs from to . Filming began in December 2006 in , with additional photography in and .

An American couple, Roy and Jessie, takes the train from to as an adventurous side trip on their return home from a in . The gregarious Roy befriends their cabin mates, a Spanish man, Carlos, traveling with his American girlfriend, Abby. The reserved Jessie does not share her husband's warmth towards the globe trotting pair. In course of the journey, Carlos shows Jessie a collection of souvenir dolls he is carrying. When Roy misses the train in while site seeing, Jessie is left alone with Carlos and Abby. Jessie decides to get off the train and wait for Roy to arrive in another train and join them. Carlos and Abby too get off the train with Jessie and proceed to a hotel. At the dinner table, Jessie sees the same dolls that Carlos had shown her and described as pretty rare. Hearing this Abby gets upset and goes off to bed. Jessie then tells Carlos that Abby is a good kid and not to involve her in his activities, which she suspects are shady and criminal. The next morning Carlos turns up in Jessie's room, tells her that his shower is not working and asks to use her bathroom. Jessie receives a call from the reception and goes down, leaving Carlos in the room. At the reception, Jessie gets to speak to Roy over the phone, who tells her that he'll return only after 4pm. Carlos convinces Jessie to accompany him to an old church. The two travel into the middle of snowy wilderness and Jessie, an amatuer photographer herself, starts clicking pictures of the old church. In the midst of the wilderness, Jessie surrenders to Carlos' advances and the two begin kissing. However, the roof of the old church collapses and Jessie somehow comes to her senses and decides to stop. Carlos however does not give up and continues to chase Jessie. Jessie ends up beating Carlos to death with a stick. She returns to her hotel and goes to the railway station to meet Roy. Meanwhile, an inquisitive Russian investigator, Grinko, whom Roy befriended while coming from Irkutsk, is traveling from to Moscow for a conference. Jessie then finds the dead Carlos' dolls in her own suitcase and realizes that Carlos may have hidden them when she had gone to the hotel reception for Roy's call. Carlos was smuggling heroin in those dolls. And Grinko (who viewers were lead to believe was also in the payroll of a Russian druglord, Rushkan) was trying to get the drugs back.

The film has received mostly positive reviews. It has a 92% fresh rating at Rotten Tomatoes, and has a perfect 100% rating from their top critics. and it has scored a 7.2/10 on the . of the Chicago Sun Times praised the film, saying it builds "true fear and suspense", and Wilder Shaw of [http://themoviewatch.blogspot.com/2008/09/film-review-transsiberian.html The Movie Watch] said it was, "one of the best thrillers I've seen in a long time". As of 9/12/2008, it has grossed $1,312,068.