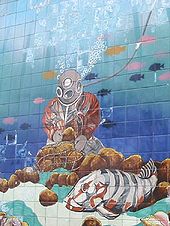 This mural in Tarpon Springs illustrates the sponge-diving activity that gives the city its nickname of "Sponge Capital of the World."

This partial list of city nicknames in Florida compiles the aliases, sobriquets and slogans that cities in Florida are known by (or have been known by historically), officially and unofficially, to local people, outsiders or their tourism boards or chambers of commerce. City nicknames can help in establishing a civic identity, helping outsiders recognize a community or attracting people to a community because of its nickname; promote civic pride; and build community unity.[1] Nicknames and slogans that successfully create a new community "ideology or myth"[2] are also believed to have economic value.[1] Their economic value is difficult to measure,[1] but there are anecdotal reports of cities that have achieved substantial economic benefits by "branding" themselves by adopting new slogans.[2]