Dil Se
This article is about the Hindi film. For the US a cappella team, see Berkeley Dil Se.
"Uyire" redirects here. For the song, see Uyire (song).

Dil Se (Hindi: दिल से, translation: From the Heart) is a 1998 Hindi film directed by Mani Ratnam. The film stars Shahrukh Khan, Manisha Koirala, and Preity Zinta. Mani Ratnam also co-wrote the screenplay for the film. It is the third in Ratnam's trilogy of terror films that depict human relationships against a background of Indian politics, after Roja and Bombay.[3][4]

Dil Se was shot in Himachal, Kashmir, Assam, Delhi, Kerala, and other parts of India and Bhutan over a period of 55 days. The film is considered an example of Indian Parallel Cinema. The highly stylized film won awards for cinematography, audiography, choreography, and music, among others. Despite being a flop at the Indian box office, the film was a success overseas earning $975,000 (USA) and £537,930 in the UK,[5] becoming the first Indian film to enter the top 10 in the United Kingdom box office charts.[6][7]

Amarkant "Amar" Varma (Shahrukh Khan), an All-India Radio program executive living in Delhi, India, is dispatched to the troubled North-Eastern region of India to report from there on the situation pertaining to the approaching 50th Anniversary of Indian independence. There, he interviews a terrorist leader on his group's motivation and ethics. He then comes across Meghna (Manisha Koirala) at a railway station and chats up with her. He excuses himself for a while, offering to get her a cup of tea, only to find her gone already on a train with three mysterious men. A few weeks after that meeting, he spots her again in a street and confronts her, but she resists and pretends not to recognise him. Amar then resorts to stalking and seeks her our near her place of dwelling and tells her he loves her "dil se" (English equivalent : from the heart). To discourage him, Meghna tells him that she is married, and leaves. Amar feels embarrassed for flirting with a married woman, and sincerely wishes to apologize to her. He arranges a meeting with her to do so, but she brings two mysterious men with her, who subsequently take Amar away and beat him. This harsh experience invigorates Amar to find Meghna again. After somehow finding out her plans to visit Ladakh, he follows her with the convenient excuse of reporting on the local festivities and she gives him the slip there too.

As Amar heads home, he finds her on the same bus. He starts flirting with her and mocking her for having her supposed husbands beat him up. Then a security guard intercepts them and asks Amar his purpose for visiting Ladakh, and Amar tells him he was reporting on the festivities there. When it is Meghna's turn to answer, she tells him that she and Amar are together. The bus breaks down and the passengers are forced to walk a two-day journey to their destination. Amar nearly loses Meghna again but manages to get hold of her and confronts her, angered about the fact she had used him, before proceeding to accuse her of being a morally loose tease. She tells him her name and that the two men who beat him up were her brothers. Amar tries to aggressively force himself up on Meghna, which causes her a painful anxiety attack.

During the pair's two day walk they have a whirlwind adventure through the desert. Though the two fall for each other, Meghna slips away and leaves Amar to return to the safety of Delhi alone. Upon his return, he finds that his family wants him to meet Preeti Nair (Preity Zinta), a potential bride. Amar and Preeti both agree to get married. Then Meghna shows up in Delhi out of nowhere at Amar's house, on the day he is to be engaged to Preeti, and asks for a place to stay. Amar and his family let her stay at their house, and Amar arranges for a job for her at the radio station.

It is later revealed that Meghna is a member of the terrorist/revolutionist group who are in to Delhi to assassinate the prime minister on the Republic Day parade. Amar finds out about the plan and confronts her, when she escapes. Amar continues to pursue her, despite getting arrested by the police and getting beaten up repeatedly by her men. In the end, he finds Meghna and pleads her to not carry out the attack. She warns him to stay away from her, as she is afraid that he might activate the bomb in her vest. He then whispers in her ear, "If you won't come with me, take me with you." Meghna's intense inner struggle subsides; she embraces Amar and the bomb gets detonated, killing them both. 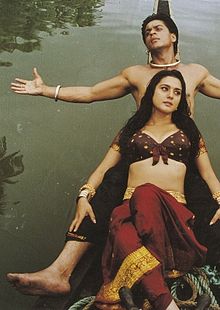 Shahrukh Khan and Preity Zinta during the song "Jiya Jale". Elleke Boehmer and Stephen Morton argue that the songs and locations in the film fill a sexual void with their exoticism.

Dil Se said to be a journey through the 7 shades of love that are defined in ancient Arabic literature. Those shades are defined as attraction, infatuation, love, reverence, worship, obsession, and death. The character played by Shahrukh Khan passes through each shade during the course of the film.[8]

The film is a dramatisation of the attraction between a character from the heart of India and another from a peripheral state and a representation of opposites in the eyes of the law and society.[9] Dil Se is described as a film "structured through deferment and unfulfilled teasing promises." [10] Rediff.com said about the film, "The entire feel of the film is appropriately poetic, with a few romantic exchanges standing out quite memorably. Tigmanshu Dhulia has handled the film's dialogues adroitly. Amid moonlit desert dunes, there is a particularly stirring conversation between the leading pair. In a somewhat big-bad-wolf-ian moment, Amar reveals his love for Meghna's eyes -- because he can't see the world hidden behind them, and his hate for the same, stunning eyes -- because he can't see the world hidden behind them."[11]

Elleke Boehmer and Stephen Morton in their book Terror and the postcolonial (2009) believe that the songs and their exotic locations in the film were very important in masking the impossible reconciliation between a terrorist and an uptight government agent by evoking pure fantasy.[10] They argue that this is a phenomenon called the "liminal space of dreaming" in that the terrorist woman cannot fulfil her heterosexual desire so the songs fill the void of this desire by "their sumptuousness and exotic locales" in the Ladakh region.[10]

Dil Se was screened at the Era New Horizons Film Festival and the Helsinki International Film Festival The film went on to win the Netpac Award for Special Mention at the Berlin International Film Festival, two National Film Awards, and six Filmfare Awards. The film was a box office flop in India.[2] The intense political agenda of the film with the trials of the Assamese on the India-China border, the love story and the fact that it coincided with the 50th Independence Anniversary celebrations were cited for its flop at the time.[12] Interestingly, however, it became a major success overseas, particularly amongst the South Asian diaspora in the west.[13] It became the first Indian film to enter the top 10 in the United Kingdom box office charts.[6] Even two months after its release in September 1998 the film was still screened on five screens, five times per day with an average of 3000 spectators a day for each screen alone in the 14-screen Cineworld complex in Feltham, West London.[12]

The film has won the following awards:

The soundtrack features 6 songs composed by A. R. Rahman. Raja Sen of Rediff called it, "Rahman's finest soundtrack, by far."[11] The song "Chaiyya Chaiyya" became especially popular, and was featured as one of the top 10 songs of all-time in an international poll conducted by BBC World Service.[15] The song has been featured in the film Inside Man, in the musical Bombay Dreams, and in the television shows Smith and CSI: Miami.[16]

The soundtrack was recorded in several other languages. The Tamil version of the track "Chaiyya Chaiyya", entitled "Thaiyya Thaiyya", was sung by Palghat Sriram, although Sukhwinder Singh, who sang the Hindi version was credited as the singer.[17] Malayalam lyrics for the song "Jiya Jale" were penned by Gireesh Puthenchery while the Punjabi part of "Thayya Thayya" was penned by Tejpaul Kour.[citation needed]

The lyrics are by Gulzar.

The lyrics are by Vairamuthu.

The lyrics are by Sirivennela Sitaramasastri.