He was born Gabriel-Charles-Louis-Bonnaventure, Count de Ficquelmont at the Castle of Dieuze, in his family's Estates in the present-day French département of Moselle. The son of a prominent high nobility Lorrainer family (House of Ficquelmont), he was introduced to the King at the Royal Court of Versailles in 1789. Only few months later, the French Revolution started. His family, as high nobility aristocrats were targeted by the Revolution, several of his relatives were beheated and many of their Estates were confiscated during the Terreur era. Ficquelmont chose to join the "Army of the Princes" fighting against the Revolutionary France.

He eventually entered the military service of the Habsburg Monarchy in 1793. Ficquelmont participated in all Austrian campaigns in the Revolutionary and Napoleonic Wars, rising to the rank of an Oberst and chief of staff in the army of Archduke Ferdinand Karl Joseph of Austria-Este. He received the capitulation of Lyon and was elevated to the rank of a Major General in 1814. Following the Fall of Napoleon, he was appointed diplomat of the Austrian Empire.

Ficquelmont continued his rise into the imperial Austrian military, being successively:

Minister-President of the Austrian Empire

In 1839 Ficquelmont was recalled to Vienna to assume the duties of the Foreign Office during the absence of Prince Metternich, in 1840 he was appointed Minister of the State and Conferences and led the Imperial Army. During the Revolutions of 1848, he was again in charge of the Department of Foreign Affairs from March 20 in the cabinet of Minster-President Franz Anton von Kolowrat-Liebsteinsky, whom he succeeded between 3-5 April as Minister-President. Due to his close ties with the "Metternich System" and the Russian tsar, popular feeling against him compelled him to resign on May 4. It was a violent period, his wife Countess Dolly, who was at their Venice's Palace at the time,[1] was arrested twice by the Venetian guarda civil and finally had to flee the city on board an English ship with her daughter, son-in-law and grand-children. Moreover, Ficquelmont's kinsman in the War Ministry, Count Theodor Franz Baillet von Latour, was lynched during the Vienna Uprising of October 1848. 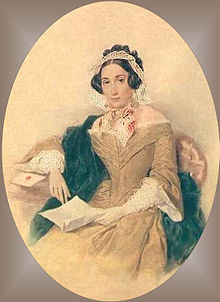 As a consequence of the French Revolution, the Ficquelmont family spread across Europe. Beyond Austria and France, members of the family settled in Italy, Hungary, England and the Netherlands, where one of Charles-Louis's brother, Count Antoine-Charles de Ficquelmont (1753-1833), recreated the title Count de Ficquelmont in the Dutch nobility[3] (July 16th 1822).

Countess Dorothea de Ficquelmont is famous for her letter-writing and diary (the former was published in Italian and Russian in 1950) telling her life as a high society's aristocrat in 19th century's Europe.