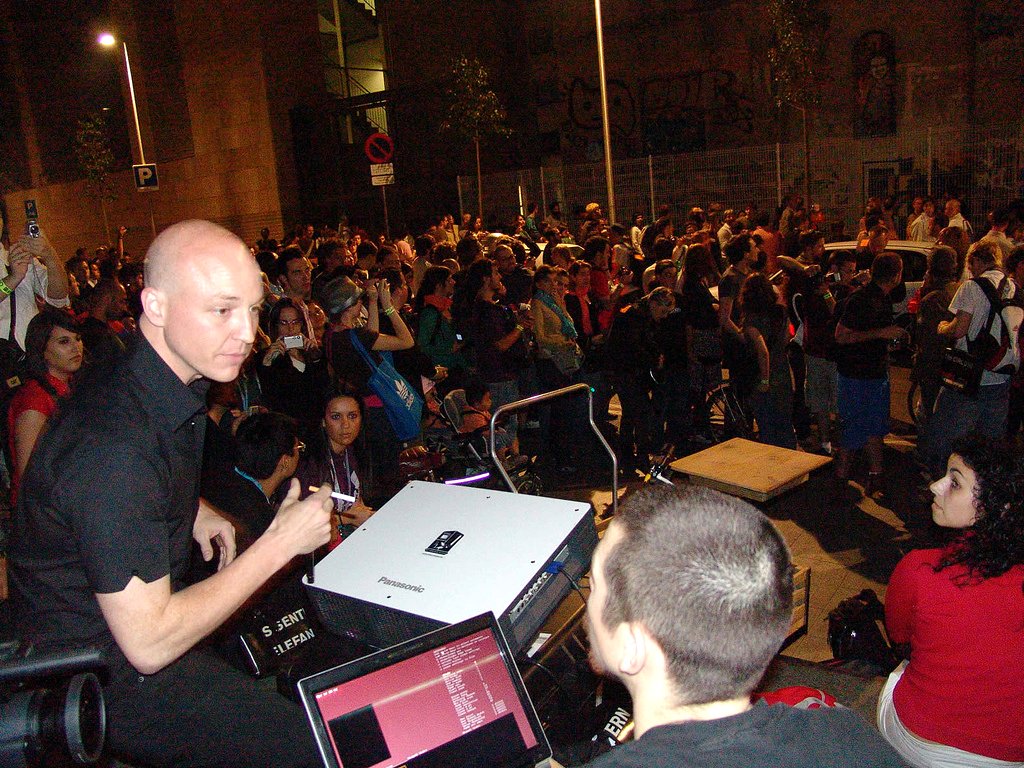 James Powderly (born 1976) is a technologist and artist who founded with . James studied music composition at the . After college, he received a Masters Degree from NYU's . James worked at [http://www.honeybeerobotics.com/ Honeybee Robotics] and was part of the team that worked on the . As the collaborative team [http://robotclothes.com Robot Clothes] , Powderly and wife, artist , received an artist residency at Eyebeam for their project, Automated Biography. The project used small robots to tell the "personal story about a sick person and their partner." [cite web
title = Robot Clothes
url = http://www.eyebeam.org/engage/exhibitions.php?id=84&subid=91
accessdate = 2008-01-25 ]

In 2005, James became a Research and Development Fellow at the Eyebeam OpenLab where he began collaborating with . Working as the , Roth and Powderly develop tools for writers and activists, such as and . [ cite news
last = Dayal
first = Geeta
title = High-Tech Graffiti: Spray Paint Is So 20th Century
pages =
language = English
publisher =
date =
url = http://www.nytimes.com/2006/06/25/arts/design/25daya.html
accessdate = 2008-01-25 ] Together they also founded [http://fffff.at FAT (Free Art and Technology) Lab] . James lives in , NY with his wife, , and two cats.

Selected Exhibitions, Screenings and performances include:

On Tuesday, August 19th, 2008, Powderly was detained and interrogated by Chinese authorities. He was in Beijing to debut the in a work called “The Green Chinese Lantern”, He intended to project the image on one of the buildings beside , without acquiring any kind of permission from the local authority. [cite web
title = Beijing: Artist James Powderly, Detained - Aug. 19, 2008
url = http://freetibet2008.org/globalactions/jamespowderly/
accessdate = 2008-08-20 ] [cite web
title = How to get thrown into a Chinese prison
url = http://news.cnet.com/8301-13578_3-10027448-38.htm
accessdate = 2008-08-30 ] This work was intended to show opposition to the Chinese government's restrictions on free speech and their occupation of in the face of the . [ cite news
last = Jacobs
first = Andrew
title = 5 Americans Are Arrested for Protest in Beijing
pages =
language = English
publisher =
date =
url = http://www.nytimes.com/2008/08/20/sports/olympics/20china.html
accessdate = 2008-08-20 ] He alleged that he and five other Free Tibet activists were detained by Chinese secret service, and interrogated in a Russian hotel before being taken to and given 10 days for "disrupting public order," a punishment that is rare for American activists detained in China. [cite web
title = Artist Tells all about Time in Chinese Jail
url = http://www.artnet.com/magazineus/news/artnetnews/artnetnews8-27-08.asp
accessdate = 2008-09-02 ] He was released during the closing day of the Olympics, on August 24.

As to whether he was "tortured," during his incarceration, Powderly said:: I think probably, a lot of people might disagree, even some of my other detainees might feel like what they received wasn't torture. And relative to what someone might receive on a daily basis at a place like Gitmo it certainly is not particularly harsh. It's kind of like being a little bit pregnant, we were a little bit tortured. [http://gothamist.com/2008/08/29/james_powderly.php]