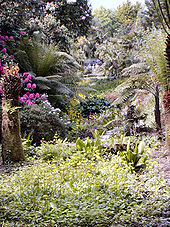 Some of the plants in Trebah garden 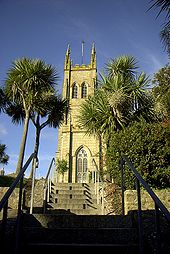 West and south Cornwall is known for its "Cornish Palms" (which are not actually palm trees but a different kind of monocot tree, Cordyline australis). These examples are at St Mary's Church, in Penzance

Cornwall is the county that forms the tip of the southwestern peninsula of England; this area has a mild and warm climate regulated by the Gulf Stream. The mild climate allows rich plant cover, such as palm trees in the far south and west of the county and in the Isles of Scilly, due to sub-tropical conditions in the summer.

On Cornwall's moors and high ground areas the high elevation makes tree cover impossible because of the wind, so these areas are populated by shrubs and bushes such as Gorse and heather. Ferns, mosses, liverworts, lichens and fungi can all be found in the county. In the wettest areas of Bodmin Moor, sphagnum or bog moss can be found.

Cornwall is home to many rare flower species, especially at the southern end of the Lizard, due to its unique soil and geology. On the Lizard Peninsula, Cornish heath – the flora emblem of Cornwall – mesembryanthemums, butcher's broom, early meadow grass and a wide range of clovers including the lizard clover, brookweed and yellow wallpepper can be found. The north coast of Cornwall features maritime grassland, heathland and stunted woodland.

The county's coastal waters are home to large populations of seals. Porpoises, whales and sharks are not uncommonly seen. St Ives recently made newspaper headlines after a reported sighting of a Great White Shark.[1] 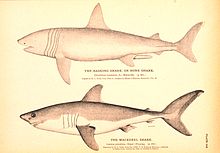 A basking shark and a porbeagle

Porbeagles inhabit the coastal waters but the etymology of the word is obscure. A common suggestion is that it combines "porpoise" and "beagle", referencing this shark's shape and tenacious hunting habits.[2] Another is that it is derived from the Cornish porth, meaning "harbour", and bugel, meaning "shepherd".[3] The Oxford English Dictionary states that the word was either borrowed from Cornish or formed from a Cornish first element with the English "beagle"; however, none of the proposed Cornish root words are fully satisfactory. Squalus cornubicus (Gmelin, 1789); Squalus cornubiensis (Pennant, 1812) and Lamna cornubica are other Latin names for the Porbeagle.

Swanpool is the only location in the British Isles in which the bryozoan Victorella pavida is found.[4] 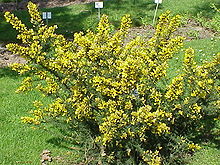 The tidal estuaries along the coasts contain large numbers of wading birds, while marshland bird species frequently settle in the bogs and mires inland. Bodmin Moor is a breeding ground for species such as lapwing, snipe and curlew. On and around the rivers, sand martins and kingfishers are often seen, while after a decline in the 1960s and 1970s, otters have been returning in large numbers. The Camel Valley is one of the habitats for otters. Bude Canal offers an ideal habitat for water voles, although the population is declining because of habitat degradation and pollution, like in other parts of the country.

The Tamar Valley Area of Outstanding Natural Beauty covers around 195 km2 (75 sq mi) around the lower Tamar (below Launceston) and its tributaries the Tavy and the Lynher. It was first proposed in 1963, but was not designated until 1995.[7]

The Tamar Otter and Wildlife Centre has European and Asian Short Clawed otters and a medium sized duck pond, a nature trail including Snowy and Barn owls and other birds along it. It has a fish pond, a restaurant area and a gift shop. The nature trail is full of wildlife such as Fallow and Muntjac deer, peacocks and the not quite so English wallabies. As well as this the nature trail has a waterfall falling down from the top of an old quarry and every few years different segments of the woodlands are coppiced. Some of the wood from this scheme is piled up in random areas of the woodlands as it makes a perfect home for badgers, hedgehogs and many creepy crawlies. 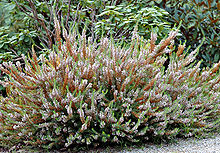 Several nature sites exist on the Lizard Peninsula; Predannack nature reserve, Mullion Island, Goonhilly Downs and the National Seal sanctuary at Gweek. It is also home to one of England's rarest breeding birds – the Chough. This species of crow, distinctive due to its red beak and legs, as well as the haunting "chee-aw" call, began breeding on Lizard in 2002. This followed a concerted effort by the Cornish Chough Project in conjunction with DEFRA and the RSPB.

The Lizard contains some of the most specialised flora of any area in Britain, including many Red Data Book plant species. Of particular note is the Cornish heath, Erica vagans, that occurs in abundance here, but which is found nowhere else in Britain. It is also one of the few places where the rare formicine ant, Formica exsecta, (the narrow-headed ant), can be found.

The Lizard district has a local organization, the Lizard Field Club, whose members have studied the natural history of the area since 1953.

At Polruan the gorse covered south facing cliffs between Polruan and Polperro provide habitats for the goldfinch, yellowhammer and stonechat in particular. Viparian life includes the slow worm and the adder. The latter is particularly numerous. 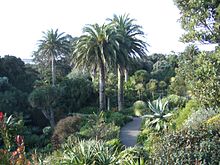 Because of the Gulf Stream, the climate of Scilly is particularly mild so sub-tropical plants can grow there, including true palm trees. Scilly is the first landing for many migrant birds, including extreme rarities from North America and Siberia. Scilly is situated far into the Atlantic Ocean, so many North American vagrant birds will make first European landfall in the archipelago.

Scilly is responsible for many firsts for Britain, and is particularly good at producing vagrant American passerines. If an extremely rare bird turns up, the island will see a significant increase in numbers of birders.

Botanists divide Cornwall and Scilly into two vice-counties: West (1) and East (2): the boundary runs irregularly from Truro to Wadebridge. 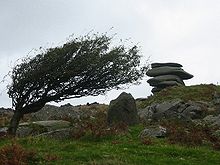 One of the ponds at Five Acres, Allet

The standard flora is by F. Hamilton Davey Flora of Cornwall (1909). Davey was assisted by A. O. Hume and he thanks Hume, his companion on excursions in Cornwall and Devon, and for help in the compilation of that Flora, publication of which was financed by him. Davey gives an account of all the reports of Cornish plants from 1576 until his own time and divides the county into eight districts. The Isles of Scilly are covered by the Flora but not very thoroughly: there is a good Flora of Scilly by J. E. Lousley. Edgar Thurston and Chambré C. Vigurs published a supplement to the flora in 1922 and in 1981 L. J. Margetts and R. W. David published A Review of the Cornish Flora. 1980 Pool: Institute of Cornish Studies ISBN 0-903686-34-1. A supplement to this for 1980-1991 by Margetts and K. L. Spurgin appeared in 1991. Another useful source of botanical information is The Flowers of the Field, by C. A. Johns (1853): it treats the country as a whole (with a supplement on grasses), but Johns was a Cornishman and very knowledgeable about its flora and fauna.[8] The Rev Charles Alexander Johns, F.L.S. (1811–1974) is also responsible for calling the attention of botanists to the very specialised flora of the Lizard in A Week at the Lizard, 1848, written when he was a teacher at Helston Grammar School.

Plants of the environs of Tintagel

There are botanic gardens at the Eden Project, the Lost Gardens of Heligan, and at Trebah and Tresco Abbey Gardens on the Isles of Scilly. 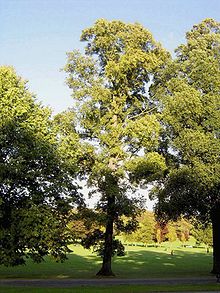 The Cornish Elm was once common in Cornwall but can now only be found outside Cornwall. The origin of the Cornish Elm in the UK remains a matter of contention; commonly assumed to have been introduced from Brittany by man, it is also considered possible that it may have survived the Ice Ages on lands to the south of Cornwall long since lost to the sea.[10] Certainly, its current distribution owes much to man's activities. The tree was traditionally considered the best choice for providing shelter along the Cornish coast; moreover its timber was much prized for its strength, and commonly used in wheel and wagon construction.[11]

This cultivar of apple is so named as it was found in Truro, Cornwall around 1800, the word 'gilliflower' being a corruption of a French word giroflier meaning clove, believed to be a reference to its odour. The cultivar was brought to the attention of commercial growers in 1813.[12]

This is an apple variety which originated in Coad's Green.[13]

The Kea Plum is a damson-like variety deriving its name from the parish of Kea.

Other Cornish varieties of plants

The Cornish heath (Erica vagans) is found only on the Lizard and has been recognised as the floral emblem of Cornwall[14] although it has been reported to be found in Fermanagh, according to W. Keble Martin.[15] In recent years daffodils have been popular on the annual Saint Piran's day march on Perran Sands, although the plants are donated by a local daffodil grower and the daffodil is already considered to be the national flower of Wales.

As part of a 2002 marketing campaign, the plant conservation charity Plantlife chose Thrift (Armeria maritima) as the "county flower" of the Isles of Scilly.[16]

The Cornish eyebright (Euphrasia vigursii) is found on heathland in Cornwall and south Devon.[17]

The Cornish moneywort (Sibthorpia europaea) is found locally in south-west England,[18] Wales and the south of Ireland; in the rest of southern England it is rare.[19]