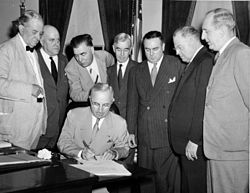 The Atomic Energy Act of 1946 (McMahon Act) determined how the United States federal government would control and manage the nuclear technology it had jointly developed with its wartime allies (Britain and Canada). Most significantly, the Act ruled that nuclear weapon development and nuclear power management would be under civilian, rather than military control, and it established the United States Atomic Energy Commission for this purpose. It was sponsored by Senator Brien McMahon, a Democrat from Connecticut, who chaired the United States Senate Special Committee on Atomic Energy, and whose hearings in late 1945 and early 1946 led to the fine tuning and passing of the Act.

Through voice vote and by the House of Representatives 265–79, the Senate passed the Act unanimously. It was signed by President Harry Truman on August 1, 1946 and it went into effect on January 1, 1947.

Factors in formulating the act

The Senate's Special Committee on Atomic Energy met about six months after the bombing of Nagasaki and Hiroshima, where it held its first public hearing, and later became the Atomic Energy Act of 1946.

Two commonly held beliefs at the time the bomb was dropped on Nagasaki and Hiroshima did much to influence and shape the formation of the Act. The first was that by keeping the secret believed to be held by the United States, the country's military forces were essentially invincible. The second was that the only feasible means of application of this new technology were restricted to the military.[1]

In The Bulletin of Atomic Scientists, Byron S. Miller discusses four factors that made the legislative process unusual. The first is the military's control of the atomic bomb. Byron states, "The military and political significance of the A-bomb and the political, social, and economic significance of its civilian counterpart, atomic energy, were problems enough; but they were almost eclipsed by the engulfing emotions of fear and awe which then surrounded the subject." It was this fear and pressure of the majority that made the legislation pass this bill.[citation needed]

The second factor Miller addressed was the "newness of the subject." With rising public interest, the discussion carried far across public venues. Many new voices arose, which would have otherwise been unheard.

Control of information and allies' reaction

"SEC. 10. (a) Policy-It shall be the policy of the Commission to control the dissemination of restricted data in such a manner as to assure the common defense and security. Consistent with such policy, the Commission shall be guided by the following principles.

(1) The term “restricted data” as used in this section means all data concerning the manufacture or utilization of atomic weapons, the production of fissionable material, or the use of fissionable material in the production of power, but shall not include any data which the Commission from time to time determines may be published without adversely affecting the common defense and security."[3]

The new control of "restricted data" excluded the United State's allies from receiving any information or data. This displeased the British and Canadian governments,[4] whose countries, before contributing technology and manpower to the Manhattan Project, had made agreements with the United States about the post-war sharing of nuclear technology. Those agreements were formalized in the 1943 Quebec Agreement. In the case of the United Kingdom, these were developed further in the 1944 Hyde Park Agreement, which was signed by Winston Churchill and Franklin Roosevelt.[4]

The provisions of the Act were substantially modified by the Atomic Energy Act of 1954.

Purpose of the act

Reasons for implementing this act are detailed in section 1 of the "Declaration of Policy" released by the Bulletin of the Atomic Scientists: "Accordingly, it is hereby declared to be the policy of the people of the United States that, subject at all times to the paramount objective of assuring the common defense and security, the development and utilization of atomic energy shall, so far as practicable, be directed toward improving the public welfare, increasing the standard of living, strengthening free competition in private enterprise, and promoting world peace."[5]

A mockup of the Fat Man nuclear device

The McMahon Bill was submitted to Congress on December 20, 1945. Under the heading “Purpose of Act,” the second item was “(2) A program for the free dissemination of basic scientific information and for maximum liberality in dissemination of related technical information.”[3]

Section 9 of the bill was titled “Dissemination of Information.” It called for release of nuclear technology information “with the utmost liberality as freely as may be consistent with the foreign and domestic policies established by the President.”

However, by August 1, 1946, when the Atomic Energy Act reached President Truman for signature, the second purpose was revised to state, “(2) A program for the control of scientific and technical information...,” and Section 9 was removed and replaced by a new Section 10, “Control of Information.” This new section contained the novel doctrine later described as “born secret” or “classified at birth.” It defined a new legal term, “restricted data”, as “all data concerning the manufacture or utilization of atomic weapons, the production of fissionable material, or the use of fissionable material in the production of power,” unless the information has been declassified. The phrase “all data” included every suggestion, speculation, scenario, or rumor—past, present, or future, regardless of its source, or even of its accuracy—unless it was specifically declassified.

This restriction on free speech, covering an entire subject matter, is unique in American law and it is still in force.[3]

Implementing the McMahon Act created a substantial rift between United States and British relations. In 1943, Winston Churchill had to face the decision that the British, along with Canada, would create an atomic program separate from the US. The McMahon Act fueled resentment from British scientists, and Churchill.[6]

The "wall of secrecy" set up by the Act compromised the public debate characteristic to a democracy, and confined research and development within the country and government. It is argued that, at the time, this was the furthest reaching monopoly of the US.[1]

The stipulations contained in the Act have caused significant controversy during debates over NATO's military command structure.[7] Both Striking Fleet Atlantic and the United States Sixth Fleet have never been allowed to be placed anywhere but directly under American commanding officers — the Supreme Allied Commander Atlantic and Commander-in-Chief, Allied Forces Southern Europe, because the dominant legal interpretation of the McMahon Act has been that nuclear striking forces cannot be controlled by non-US commanders. This was the reason for the formation of Striking Fleet Atlantic as an independent entity, instead of being operationally subordinated to the UK Admiral serving as Commander-in-Chief, Eastern Atlantic, in October–November 1952.[8] This was also the reason why the Sixth Fleet, in its NATO guise as Naval Striking and Support Force, South, was placed under American control rather than Allied Forces Mediterranean when the European commands were agreed at the same time.[9] The Act was also probably a factor in the American refusal to allow a French officer to take command of Allied Forces Southern Europe in 1997.

Among the ten propositions outlined in the analysis are the Commission's right to seize "any real property containing deposits of uranium or thorium, and with the consent of the President it may seize and take over, through condemnation proceedings, any real property containing any other material determined by the Commission to be peculiarly essential to the production of fissionable materials." And the fourth proposition stating, "It may be a crime for any American company to have a foreign affiliate, as for example in England, engage in the production of fissionable material."[10]

One of the main clarifications provided by the analysis is the definition of "fissionable material" ("plutonium, enriched uranium, and any other material which the Commission determines to be capable of releasing substantial quantities of energy through nuclear chain reaction of the material, or any material artificially enriched by any of the foregoing; but does not include source materials.”[10]

This analysis and propositions were designed to allow as much freedom as possible for citizens, scientists, and commercial industries while maintaining control. The Commission owned fissionable material and wanted to make it available for developmental work and private research.[10]