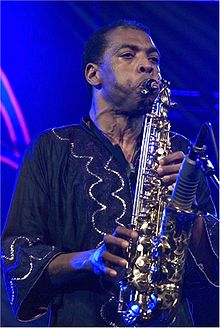 West Africa stretches from the Sahara Desert to the Atlantic Ocean. The region's musical heritage includes a variety of popular music styles, especially from the countries of Senegal, Ghana, Mali, Côte d'Ivoire, Niger, Sierra Leone and Nigeria. Griots, wandering musicians and praise singers, are found throughout the region, and some musical instruments (such as the kora, xalam, djembe and talking drum) are found in a majority of West African countries.

Some performers are tribespeople who have lived a nomadic existence, which is true of Mariem Hassan, a vocalist from the country of Western Sahara. Restless during occupation by imperialism; the 1960s saw revoluriona[clarification needed] dienot just a few countries in Africa earn their independence, but feel an uncertainty later as various factions took over. One such was Western Sahara, which had previously been a Spanish colony, with its inhabitants speaking some Spanish, Arabic, and other dialects common to the region. Those who moved to refugee camps found that most often, it was women gaining stature as the storytellers of their past, their existence, and their hopes through their songs and performances.[1]

The Cape Verde Islands have homed and oreserved[clarification needed] along the centuries, through being an intermediate port in the Atlantic, rhythms from Europe and the Americas, combined in very popular and rhythmic music. Many of the well-known Cape Verdian musicians have settled in Dakar, where they mingled further with musicians from West Africa.

There have been an extensive coverage in the media during the twenty-first century, especially in relation to the internet; there are a number of website devoted to music from west africa including; africahiphop.com,museke.com but most noticeably and most influential of them all is BiGxGh.Com,[.[2] An online interactive content dedicated to providing the world with the best of African music from the musicians themselves on a daily basis.