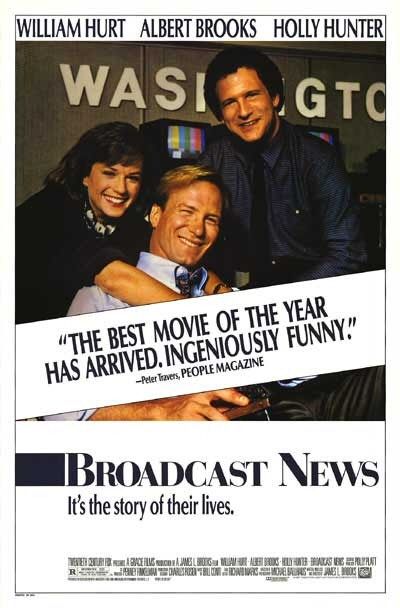 "Broadcast News" is a 1987 written, produced and directed by , about a virtuoso producer (), who has daily emotional breakdowns, a brilliant yet prickly reporter () and his charismatic but far less seasoned rival (). It also stars , , , and in an unbilled role as the evening news anchor.

The film revolves around three characters who work in television news. Jane Craig (Hunter) is a talented producer who tries to conceal how important it is for her to be found sexually attractive by a handsome man who epitomizes everything about television news that appalls her. Jane's best friend and frequent collaborator, Aaron Altman (Brooks), is a gifted writer and reporter ambitious for on-camera exposure, who is secretly in love with Jane, and embittered by her rejection of him. Tom Grunick (Hurt), a local news anchorman who was up until recently a sports anchorman, is charismatic and telegenic but denied self-respect due to his intellectual limitations, of which he is all too aware. He is attracted to Jane, although he is also intimidated by her skills and intensity. The emotional triangle formed by these three disparate people and their different career paths form the basis for the film's storyline.

The film contains bits of business that are a send-up of TV journalism's egos on the one hand, and a tribute to the immediacy with which the medium can infuse news events on the other. Many of its detailed observations of public affairs TV are extremely accurate.

The events depicted in the movie closely parallel and satirize the mass layoffs ("") that occurred at . Longtime "" producer was a technical adviser on the film.

The score was by . -winning composers Glen Roven and make cameo appearances as a dorky musician team who have composed a theme for the news program in the film.

The female lead was originally written for , who worked with in the Academy Award-winning film "". However, Winger was replaced by at the last minute because of her pregnancy.