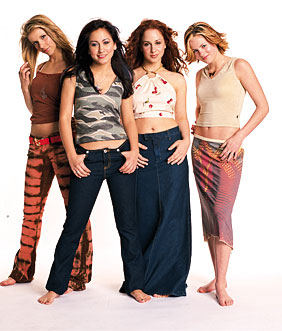 Dream was an American pop .

The quartet was originally formed in October 1998 by talent scout Judith Fontaine, who selected Holly Blake-Arnstein (born , ), (born , ), Ashley Poole (born , ), and Alex Chester (born , ), four teens from , to comprise this new girl group. The original name of the group was "First Warning" but later changed to "Dream".

More changes were in store: the girls left Fontaine and were then signed by Sean "Puffy" Combs (now known as Diddy) to his label, and in January 1999, Chester was replaced by Blake-Arnstein's best friend, Diana Ortiz (born , ). Fontaine later sued Sean Combs and Blake-Arnstein, Schuman, and Poole, but lost her court case. [cite web | author=Hiatt, Bryan | title=Judge To Dream's Ex-Manager: They Owe You Not| publisher=MTV.com | date= August 13, 2001 | url=http://www.mtv.com/news/articles/1446590/08132001/dream.jhtml | accessdate=2006-07-18]

Dream released their debut single "", remixed by , in 2000 and their debut album "" was released on January 23, 2001. "He Loves U Not," charted in three countries, peaking at #2 on the Singles Chart in the United States. The video for this single peaked at #2 on 's "TRL" and became the first video by a girl group to be retired from the countdown. The subsequent single, "This Is Me," enjoyed a fair amount of success as well; the music video hit #1 on "TRL". The final single and video from the album was "This Is Me (remix)" and featured rapper Kain as well as Diddy.

During this time, Dream participated in the 2001 TRL tour and opened for artists such as , , and . They were featured in a segment of "". released dolls of the group in 2001.

Though Bad Boy Records had planned to release "Miss You" and "In My Dreams" as the third and fourth singles, respectively, from "It Was All A Dream", the singles were never released (though promotional copies of the latter were shipped), partly due to the impact of the September 11 terrorist attacks in 2001. Little was heard from Dream until April 2002, when Melissa Schuman left the group to pursue an acting career. Diddy appeared on "TRL" on April 3 to announce the news, noting that there were no bitter feelings [cite web | author=Norris, John | title=Dream Member Quits To Pursue New Dream: Acting| publisher=MTV.com | date= April 3, 2002 | url=http://www.mtv.com/news/articles/1453252/04032002/dream.jhtml | accessdate=2006-07-18] . A lengthy search led by Diddy and the three remaining members led to 15-year-old Kasey Sheridan (born , ) becoming the newest and youngest member of the group in the early fall of 2002 [cite web | author=unknown | title=P. Diddy Dreams Another Dream| publisher=Yahoo! Music | date= May 14, 2003 | url=http://music.yahoo.com/read/news/12038248 | accessdate=2006-07-18] .

Dream spent the subsequent months recording new songs for their second album. In the summer of 2003, the girls returned to the scene with a new, sexier image and a new single featuring rapper Loon called "Crazy." The single and its video did not receive the acclaim and success of "He Loves U Not," and the second single from the album, supposedly "That's OK," was never released. Dream's album "Reality" was to follow in May, but its release kept being postponed, and it was ultimately never officially released. Dream was then dropped from Bad Boy Records, and the group subsequently disbanded, although their dissolution was never formally announced.

In September 2005, a group of fans discovered that the unreleased "Reality" CD was available for purchase from VirginMega.fr. It is speculated that the CD was released in France to keep Bad Boy Records from violating the album release contract with Dream while saving as much money as possible.

In April 2006, an MTV News article discussed the reasons behind Dream's break-up. Blake-Arnstein was interviewed for the article and noted that the sexier, more mature image pushed upon the group by Diddy and their management was not a welcome change, and that she and the other members of Dream were no longer enjoying the music and the experience [cite web | author=Kaufman, Gil | title=Where Ya Been? Dream Wake Up, 'Sex' Burns Marcy Playground | publisher=MTV.com | date= April 12, 2006 | url=http://www.mtv.com/news/articles/1528431/20060412/story.jhtml | accessdate=2006-07-18] .

On May 9, 2008, three years after their 2nd album "Reality" leak online, Dream has two unreleased albums are on iTunes to buy. The albums are "Daddy's Little Girl" and "Dream Never Land". There haven't been news on this discovered but some say that those songs might be their second album if Melissa hadn't left the group back in 2002.

In July 2008, Dream's "official" second album, Reality, was posted on the US iTunes Store. It lists as having being released on May 13, 2008 under the label BAD BOY WORLDWIDE/ClockWork Entertainment/2620 Music. The album, along with the previously (newly) released "Daddy's Little Girl" and "Dream Never Land" can all be found under the Dream name under the Hip-Hop/Rap Genre, while their first album is still listed under Pop

On , , announced that after a failed attempt to bring all of the original members of Dream back together, she and Ashley Poole are starting a new band. They will have a new name and a reality show documenting their auditions for new members. [cite web | url=http://www.melissa-schuman.com/main.htm | title=The Official Melissa Schuman Website | work=News | first=Melissa | last=Schuman | quote=After a failed attempt to get DREAM back together within the last few months, Ashley Poole and I are searching for new talent to start fresh with a new group, new sound, and new friendships. We are also looking forward to an upcoming reality show which will follow us on this new journey together. Since this will be a new group, we need a new name, so we would love to hear anybody's thoughts on what we should call our band. | date= | accessdate=2008-03-05] On , , Melissa announced the name of their new group would be . The name was chosen for the symbol of the Phoenix, which is a bird that rises from the ashes, which the girls felt they have done from their past. They are currently working on their first album. On , , Melissa also announced that Diana Oritz, also from Dream, would be joining the group as well.