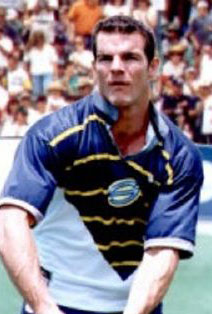 Ian Roberts (born ) is an n former professional player and actor. Late in his football career he announced he was which gained him much attention in Australia and worldwide as a result.

Roberts was born in , . He played as a Souths junior in his early career, as a forward. He battled to overcome a series of injuries to reach his full potential in the Test arena. Despite not having yet played for either New South Wales or Australia, Roberts signed a huge contract with the in 1990.

Roberts made 9 appearances for the New South Wales State of Origin team between and . He was an intimidating enforcer in the NSW forward pack and one of the toughest to grace the Origin stage. An amazingly fit athlete, he famously collapsed from exhaustion after a typically tireless effort in Game I of . The Blues won six of the nine matches in which Roberts played.

In , he was named one of the 25 greatest ever New South Wales players.

Well known in Sydney gay circles for some time, Roberts came out publicly in , discussing his sexuality in magazines and on television over the following year. The rugby league world was generally very supportive, with other players commenting that it was important to be "true to yourself", while "" principals , and Steve Roach appeared in a poster campaign against conducted by the Lesbian and Gay Anti-Violence Project. he has been praised for helping to question prevailing myths about gays and sport. Paul Freeman's book "Ian Roberts - Finding Out" was published in 1997 (ISBN 0-09-183336-1).

Roberts finished playing professional football in 1998, and began studying at the (NIDA) in . In 1999 Roberts was taken to court by over an on-field brawl that occurred in 1991. Jack was, in his view, taking a stand against a cowardly, yet devastating beating he received by several Manly players. He attempted to sue Roberts for $100,000 in damages, alleging he suffered shock, traumatic injuries to his face and eyes, cuts, headaches and numbness and was embarrassed by scarring to his face. Jack and Roberts eventually settled the dispute outside the court with Roberts handing over more than $50,000.

In 2000, he was awarded the for his contribution to Australia's international standing in rugby league. Roberts served on the Judiciary in . Roberts gave evidence to the State of New South Wales in regard to the of , a street prostitute who was set to give evidence against a paedophile syndicate. He disappeared in , and his remains were recovered in . This story was the subject of an episode of the Australian TV program "", entitled "The Lost Boy", which first aired on , 2005.

Early in 2005, he appeared in the second series of the Australian television series Dancing With The Stars, dancing with Natalie Lowe. He became the runner up in the competition, losing out to Tom Williams.

On 1 July 2006, Roberts was charged over an incident involving his former partner, Ben Prideaux; the 30-year-old male was alleged to have suffered cuts and bruises on his forearms in the incident. On 25 May , Roberts was cleared of these charges by a court in Sydney. [ [http://abc.net.au/news/newsitems/200705/s1933670.htm Roberts cleared of assaulting ex-boyfriend. 25/05/2007. ABC News Online ] ]

Roberts appeared on the 17 April 2007 cover of "" magazine in an exclusive interview with Canadian author and journalist , along with a photo layout by celebrity photographer .