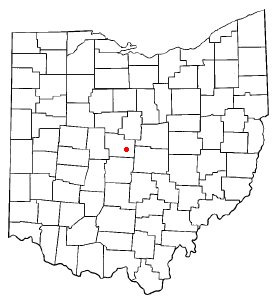 There were 122 households out of which 32.0% had children under the age of 18 living with them, 61.5% were married couples living together, 5.7% had a female householder with no husband present, and 27.0% were non-families. 25.4% of all households were made up of individuals and 9.8% had someone living alone who was 65 years of age or older. The average household size was 2.50 and the average family size was 2.97.

Galena was established in 1809 between Big and Little Walnut Creeks as a mill seat. A natural ten feet drop in elevation in a narrow neck between the two streams provided an excellent route for millraces and water-powered grist and saw mills were soon in operation. Gilbert Carpenter, the founder of the village, came from Wilkes Barre, Pennsylvania, and was the first Methodist clergyman in Delaware County. His gristmill held the first church services in the area.

William Carpenter platted the village in 1816 and named it Zoar, apparently identifying it with the ancient city of refuge referenced in the Biblical book of Genesis. In 1834, when residents applied for a post office, the name was disqualified because such a community already existed in Tuscarawas County. For unknown reasons, Nathan Dustin suggested the name Galena, which was immediately adopted. Long after the post office creation, the name was applied to a nearby shale formation.

Local legend tells that several names were put into a hat. Galena,the natural mineral form of was the one pulled out.

The streets facing the village green, which has given the community a New England character, have always been the focus of commercial activity. Brick commercial blocks, the Dustin Inn (1828) and a Masonic lodge hall (1826), still stand on the northwest corner. Turn-of-the-century commercial blocks, including a 1906 bank now occupied by the village offices, stand on the southern edge of the square. All other vintage buildings that once created a four-sided square have been removed following fires or the creation of Hoover Reservoir in the 1950s.

The original plat set aside lots near the square for a church and school. The present Methodist church was erected in 1829 and the school in 1868. An Episcopal church stood adjacent to the school from 1877 until 1932.

While the village was established to take advantage of water power, its industrial base has always been modest. Besides the grist and saw mills, an agricultural implement factory operated from the 1860s to the 1920s along Big Walnut Creek on what is now South Walnut Street. A clay tile company with a solitary kiln was established on Holmes Street in the 1890s. It was expanded into the Galena Shale Tile and Brick Company which, for a time in the late twentieth century, filled a distinctive market niche by producing hand-molded bricks in a whole battery of kilns. This firm closed down in 1983. The plant site is now home to light industrial companies.

A line was constructed through the village in 1873. Village residents collected a subscription of $13,000 to bring the line to Galena and area was donated for a depot. Although the line is abandoned, the tracks removed, and the depot grounds stand vacant, a portion of the route, including the turn-of-the-century plate girder bridge over Little Walnut Creek, is maintained by the village as a walking path.

The inauguration of municipal services came in 1924 with the incorporation of Galena. Among the early actions by the new council, led by Mayor Willard F. Bennett, was granting permission to an electric company to bring power to village residents and provide street lighting. A police officer, or marshal, was also elected in 1924, but it was not until the following year that a motorcycle was purchased for him. A was created in 1939. It has since become a part of BST & G Volunteer Fire Department in Sunbury.

Galena today remains much like it was identified in the 1880 county history, "A quiet little village."