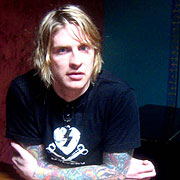 Brian Byrne (born , in ) is a Canadian and , best recognized as the vocalist for .

Brian joined his first band in in 1988, a hair-metal band called Pandemonium. The band also featured John Kennedy, Rick Waterman, Todd Cook, and the late Kris Waterman, who selected the 13 year-old Byrne as the lead singer for the band.

Byrne lived in Steady Brook and in the early 1990s, where he worked at different times as cook, dishwasher, bartender, night cleaner, office work, ski instructor, and rock climbing instructor. He fronted bands such as Mess and Klaven (the latter with Adam Gontier of ) before eventually joining in 1997. He recorded two albums with them, "" (1999) and "" (2003).

His solo debut, "", was released on April 11, 2006. In support of the album he toured Canada, playing both acoustic solo sets and with a full backing band. In November 2006, Byrne opened for on their Canadian dates.

Byrne appeared in an Ontario Travel tourism television commercial that debuted in March 2007; he sings the song "There's No Place Like This" to images of people in Ontario enjoying themselves across the province.

In September 2007 the band played a showcase in , and later toured , doing shows with and as the supporting act for .