Clover is the production name given to the giant, fictional monster that appears in the 2008 film Cloverfield. The creature was originally conceived by producer J. J. Abrams and was designed by artist Neville Page. In the film, the monster is never named; the name "Cloverfield" is only given to the US Department of Defense case file of the incidents depicted in the movie.[1] The Department of Defense names the creature "LSA" for Large-Scale Aggressor in the movie's Blu-ray special feature called "Cloverfield Special Investigation Mode". The name Clover was the nickname affectionately given to the monster among the production staff.[2]

"Clover" was first referred to in the viral marketing campaign for the 2008 film, including a recording of its roar, foreign news clips about a monster attack and sonar images.[3]

A similar monster appears in a four-part manga series Cloverfield/Kishin by Yoshiki Togawa, which serves as a spin-off to the film.[4][5] The monster made a first full appearance in Cloverfield, where it was seen rampaging through New York City and being attacked by the United States military.[6]

J. J. Abrams conceived of a new monster after he and his son visited a toy store in Japan while promoting Mission: Impossible III. He explained, "We saw all these Godzilla toys, and I thought, we need our own [American] monster, and not like King Kong. But I wanted something that was just insane and intense".[7][8][9]

The monster was designed by artist Neville Page. He sought a biological rationale for the creature, though many of his ideas would not show up on screen. Page designed the creature as immature and suffering from "separation anxiety". He compared the creature to a rampaging elephant, saying "there's nothing scarier than something huge that's spooked".[10] Page said of the creature's backstory, "For me, one of the most key moments in our collective brainstorming was the choice to make the creature be something that we would empathize with. It is not out there just killing. It is confused, lost, scared. It's a newborn. Having this be a story point (one that the audience does not know), it allowed for some purposeful choices about its anatomy, movement and, yes, motivations".[11] The creature was developed by visual effects supervisor Kevin Blank and Phil Tippett's company Tippett Studio. Blank described the intended goal of the creature, "Rather than the monster having a personality [like Godzilla or King Kong], it's more of an entity or an event".[11]

Goddard pointed out the lack of explanation in the film of the creature's origin was deliberate so as to make the film more realistic, as civilians would not know where it would come from. Despite this, in the final moments of the film, after the explosion and just before the credits, the characters Beth and Rob are talking while on an amusement ride. The camera is pointed out the window at a section of beach and ocean as a distant object can be seen coming in from the upper right of the picture. It splashes into the water just to the left of the yacht in that scene. The date, April 27, 6:17 p.m., is prior to the monster's attack on the city. As part of the viral marketing campaign, it is explained that the splash is made by a satellite crashing into the ocean. Reeves said the creature had "been down there in the water for thousands and thousands of years".[12]

Reeves described the creature's reaction to its surroundings thus: "It’s this new environment that it finds frightening". To indicate this, Reeves suggested the addition of white in the creature's eyes so it would look similar to a spooked horse.[12] The filmmakers generated and used the idea of parasites because the film could not realistically have scenes between the human protagonists and the enormous creature.[12]

Although "just a baby",[13] the creature is 25 stories tall.[12] It is quite resilient, able to resist every attack the military throws at it. At the end of the movie, the military is willing to destroy Manhattan in an attempt to kill it.

It is vaguely quadrupedal, though it is capable of standing upright over short distances. The limbs are comparatively long and thin compared with the body core, and according to creator Neville Page this coupled with its quadrupedal stance is meant to loosely imply that it is a newborn: he speculates that the adults may be bipedal. The forelimbs are large compared to the rest of the body. the hind legs are comparatively stubby. The creature's head at first glance appears to be a solid sphere, but it can open its jaw extremely wide, the head unfolding almost like an onion. Above the eyes on either side of the head are fleshy pouches which it puffs up when agitated.

The creature's design includes appendages on its underbelly, described by Neville Page as an "elongated, and articulated external esophagus with the business end terminating in teethlike fingers". They were designed as a body part to relate the scale of human prey to the huge scale of the creature. The scenes from the film where people were sucked into the feeding tubes were cut from the final edit, but the fourth and final chapter of Cloverfield/Kishin shows how the tubes work.[14]

The creature is covered with parasites, which it sheds as part of a "post-birth ritual". Abrams described the parasites as "horrifying, dog-sized creatures that just scatter around the city and add to the nightmare of the evening." Reeves added that "The parasites have a voracious, rabid, bounding nature, but they also have a crab-like crawl. They have the viciousness of a dog, but with the ability to climb walls and stick to objects."[12] The parasites fall off and begin to attack people. The top half of the parasite's head is the mandible, moving up from the lower jaw to open. The top and lower jaws end in serrated edges and also have four pairs of eyes each. The rest of the parasite consists of a crustacean-like carapace, several pairs of claws, and arms. A deep blue-purple muscular membrane stretches between the top and lower jaws. When a human is bitten, the victim becomes ill and bleeds profusely, mainly from the eyes, and shortly after this, the torso expands and explodes. They are called HSPs (Human Scale Parasites) on the Blu-ray Special Investigation Mode.

Artist Neville Page, in response to claims that the design of the creature was similar to that of the 2006 South Korean film The Host, said, "They are [similar] in that they ravage and seem to originate from the water, but the end results are quite different. However, when I finally saw some of the concept art, there were some very obvious similarities. But then again, I think that we were both channeling similar biological possibilities."[11] 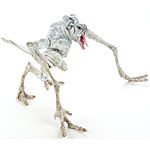 Based on the success of Cloverfield, which earned over $40 million over its opening weekend in the United States and Canadian box office, the toy company Hasbro began accepting orders for a 14-inch limited edition toy figure of the monster to be shipped to fans starting December 24, 2008. It also comes with several accessories, including the disembodied head of the Statue of Liberty, two changeable heads (one with an open mouth, one with a closed mouth), and 10 static figures of the monster's parasites.[15][16][17]

Reviewing the film Cloverfield, the San Jose Mercury News described the creature as "a monster for the MySpace generation".[18] Reviewer James Berardinelli noted, "The movie follows the Jaws rule that monsters are usually more intimidating when they are shown infrequently and only in brief glimpses".[19] Amy Biancolli of the Houston Chronicle described the creature as retaining "an air of mystery—a monstrous je ne sais quoi that makes him all the freakier."[20] Richard Corliss of Time complained of the recycled elements of the creature, such as its emergence mimicking the original Godzilla film and its parasites being similar to the "toy meanies" from the 1984 film Gremlins.

Roger Ebert of the Chicago Sun-Times expressed acceptance of the lack of explanation for the creature's origin, explaining that it "is all right with me after the tiresome opening speeches in so many of the 30 or more Godzilla films".[21] Peter Howell of the Toronto Star thought that the "main" creature was disappointing, while he considered the "mutant spider crabs" that came from it as "way scarier".[22] Lawrence Person of Locus Online describes it as "like a cross between a truly giant mantis and Johnny the Skeletal Torso."[23] Todd McCarthy of Variety found that the creature was more reassuring as it appeared more in the film, explaining, "Its very nature as a walking, stalking being suggests it can somehow be killed by conventional means".[24] Chris Vognar of The Dallas Morning News applauded the creature's appearance as cinematic: "The thrill here isn't in the critter but in how it's revealed. First we see what it's capable of. Then we catch a tail here, a limb there. The spider-crabs announce their presence with authority. Then, once the opening acts are done, and Manhattan is in shambles, the big guy is ready for his close-up".[25] On Cracked's list of '6 Movie Monsters That Just Wouldn't Work', the Cloverfield monster is marked at number 3. The writer said that, "this creature had literally never lived anywhere else up to the events of the movie, so suddenly emerging from the sea and tromping around Times Square would be the equivalent of a newborn human baby surviving on the surface of Mars without a space suit.[26]