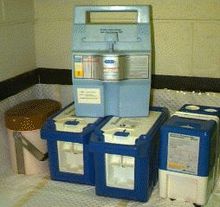 A technetium-99m generator, or colloquially a technetium cow or moly cow, is a device used to extract the metastable isotope 99mTc of technetium from a source of decaying molybdenum-99. 99Mo has a half-life of 66 hours[1] and can be easily transported over long distances to hospitals where its decay product technetium-99m (with a half-life of only 6 hours, inconvenient for transport) is extracted and used for a variety of nuclear medicine diagnostic procedures, where its short half-life is very useful.

99Mo can be obtained by the neutron activation (n,γ reaction) of 98Mo in a high neutron flux reactor. However, the most frequently used method requires a uranium target with high enriched uranium-235 (up to 90% 235U) or low enriched uranium (less than 20% 235U).[2] The target is irradiated with neutrons to form 99Mo as a fission product [1]. Molybdenum-99 is then separated from other fission products in a hot cell.[2]

Most commercial 99Mo/99mTc generators use column chromatography, in which 99Mo in the form of molybdate, MoO42- is adsorbed onto acid alumina (Al2O3). When the Mo-99 decays it forms pertechnetate TcO4-, which because of its single charge is less tightly bound to the alumina. Pulling normal saline solution through the column of immobilized 99Mo elutes the soluble 99mTc, resulting in a saline solution containing the 99mTc as the pertechnetate, with sodium as the counterbalancing cation.

The solution of sodium pertechnetate may then be added in an appropriate concentration to the organ-specific pharmaceutical to be used, or sodium pertechnetate can be used directly without pharmaceutical tagging for specific procedures requiring only the 99mTcO4- as the primary radiopharmaceutical. A large percentage of the 99mTc generated by a 99Mo/99mTc generator is produced in the first 3 parent half-lives, or approximately one week. Hence, clinical nuclear medicine units purchase at least one such generator per week or order several in a staggered fashion.