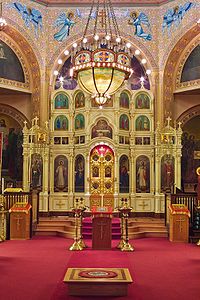 In a Russian Orthodox church, the orlets is usually kept permanently on the cathedra (kafedra).

The eagle rug is normally woven or embroidered so as to depict an eagle soaring over a city that is surrounded by walls and towers. The walled city represents the bishop's episcopal authority over his Diocese, and his defence of the faithful in it. The eagle soaring above the city represents the bishop's uprightness of life, and his sound theological preaching of the Gospel, which should soar above all worldliness and elevate the hearts and minds of the faithful. Around the eagle's head is a halo, in imitation of the eagle used to depict St. John the Divine, and symbolizing theological attainments and the grace of the Holy Spirit.[1] The eagle is also a reminder that, "as an eagle can see clearly over distances, so must a bishop oversee all parts of his diocese."[2]

Any time a bishop is present in the church, or functioning at some service outdoors - whether vested and serving or whether simply wearing the mantle - he will stand on an eagle rug. During the Hierarchical Divine Liturgy[3] many eagle rugs are used. There will always be one where he is seated or standing, and before he moves to a spot (such as on the Ambo) to give a blessing, an eagle rug will be placed there for him to stand on as he blesses. The eagle rug placed at the bishop's cathedra is slightly larger than the others used during the services. The eagle rug is always placed so that the head of the eagle faces the direction the bishop will be facing.

Before his Consecration, a bishop-elect will be led onto a very large eagle rug, used specifically for this purpose, as the Consecrating Bishops examine him regarding his faith. During this examination, he holds in his hands his written confession of faith. He says the Nicene Creed as he stands on the portion of the eagle rug depicting the tail of the eagle. He is then led to the center of the eagle rug to make a more thorough explanation of the Orthodoxy of his Faith regarding Trinitarian theology, Christology and Sacred Tradition. He is then led to the portion of the eagle rug depicting the head of the eagle, and vows to follow the Sacred Canons and teachings of the Church, to preserve the peace of the Church, and to faithfully and zealously fulfill the obligations of the Episcopate. He then hands the hands of the consecrating bishops and hands them his written confession of faith. Only after this, may the Consecration proceed.