Tronador is an extinct stratovolcano in the southern Andes, located along the border between Argentina and Chile near the city of Bariloche. The mountain was named Tronador (Spanish for Thunderer) by locals in reference to the sound of falling seracs. With an altitude of 3,491 m, Tronador stands more than 1000 m above nearby mountains in the Andean massif, making it a popular mountaineering destination. Located inside two National Parks, Nahuel Huapi in Argentina and Vicente Pérez Rosales in Chile, Tronador hosts a total of eight glaciers, which are currently retreating due to warming of the upper troposphere.[1]

Tronador is located in the Wet Andes, a zone of high precipitations in form of both snow and rain. The humid temperate climate of the southern Andes allows several glaciers to develop due to high accumulation rates. Most of the precipitation is produced by western frontal systems from the Pacific. Located in the middle of the Andean massif at a latitude of 41° S Tronador is part of an alpine landscape of fjords, glacial lakes and u-shaped valleys. The forming of the landscape took place during the Quaternary glaciations, periods during which the whole area was covered by the Patagonian Ice Sheet. The volcano grew during the glacials and interglacials of the Pleistocene but became practically extinct in late Middle Pleistocene 300 ka ago, due to a shift in the active front of the Southern Volcanic Zone to which it belongs.[2] Since then, glaciations and other erosive processes shaped the mountain freely without new output of lava or tephra. As in the case of nearby Lanín volcano Tronador is built up mostly of basalts, and has seen a decline in activity as the Osorno and Calbuco volcanoes grow further west. 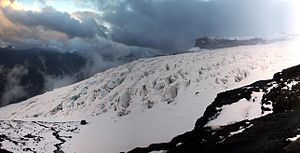 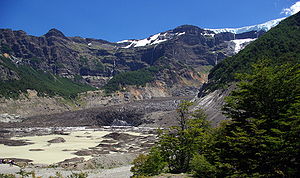 Tronador is notable for the many glaciers covering parts of its flanks. Up to eight glaciers have been inventoried: Alerce, Ventisquero Negro, Casa Pangue, Castaño Overa , Río Blanco, Frías, Peulla and Manso. Over the last decades the glaciers on Tronador, like the majority of southern Andean glaciers, have been retreating. The Casa Pangue glacier on the northwestern side of Tronador experienced a thinning between 1961 and 1998, with an increased rate of retreat between 1981-1998 at 52 m a−1. The retreat and thinning is attributed to a decrease in precipitations and a warming of the upper troposphere over the last decades.[1]

Ventisquero Negro ("black snowdrift" in Spanish) is a rather unique glacier at the base of Tronador in Nahuel Huapi National Park. This glacier's unusual dark brown colour comes from dirt and sediment picked up in the glacier's accumulation zone, which is fed by the Río Manso Glacier several hundred metres higher up the mountain. Brown icebergs calve from the glacier and then float in a small lake until eventually melting.

Tronador was first climbed by Hermann Claussen solo on 29 January 1934, after several attempts. A mountain hut, Refugio Otto Meiling, is the destination of popular day hikes, named after a mountaineer who made dozens of ascents and spent years guiding people around it. The hut is located about 1200m vertically above Pampa Linda, at the mountain's base.

Most summers the International or Anon peak (the highest of its three peaks), is climbable. However, an unusually hot summer increased rockfall to dangerous levels during January and February 2008. The Argentine side risks becoming no longer accessible due to increasingly warm weather in the region destabalising the glaciers. 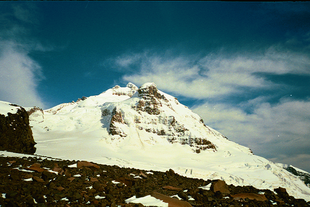 View of the Tronador's main peak