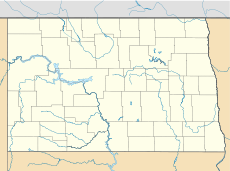 Minot AFB is the home of two major wings: the 5th Bomb Wing and 91st Missile Wing, both of the Air Force Global Strike Command (AFGSC).

Originally opened in 1957 as an Air Defense Command (ADC) base, it became a major Strategic Air Command (SAC) base in the early 1960s, with both nuclear-tipped intercontinental ballistic missiles and manned bombers and aerial refueling aircraft. When SAC was inactivated in 1992, the nuclear mission of the base was divided between two commands, with missiles going to the Air Force Space Command (AFSPC) and manned bombers to the Air Combat Command (ACC). With the establishment of the Air Force Global Strike Command (AFGSC) in 2009, missiles and manned bombers (excluding the B-1 Lancer) were transferred from AFSPC and ACC to AFGSC in the late 2009 and early 2010.[1]

The 5th Bomb Wing (5 BW) is an element of the Global Strike Command (AFGSC) and is the host unit at Minot AFB; its commander is dual-hatted as the installation commander and the unit is responsible for all base services, such as housing/billeting, medical, MWR, library, Officers' Club, etc. The primary mission of the 5th Bomb Wing is to maintain and operate B-52H bombers assigned to the 23d Bomb Squadron and the 69th Bomb Squadron. Minot AFB is one of two remaining bases with B-52s; the other is Barksdale AFB near Shreveport, Louisiana.

The 5th Bomb Wing is composed of:

The 91st Missile Wing (91 MW) of the Air Force Global Strike Command (AFGSC) is responsible for maintaining the Minuteman III nuclear missiles located in three main fields across North Dakota. Previously known as the 91st Space Wing, it was renamed as a missile wing in June 2008 It is one of the Air Force’s three operational intercontinental ballistic missile units, the others being at Malmstrom Air Force Base, Montana, and F.E. Warren Air Force Base, Wyoming. In addition to its missiles, the wing also operates a squadron of UH-1N Twin Huey helicopters in support of missile and launch control sites.

Operational groups of the 91st wing are:

Construction of Minot AFB began in May 1956, and the base officially opened on January 10, 1957. Minot AFB is named for the nearby city of Minot, North Dakota.

The ADC 32d Fighter Group was the first operational unit at Minot, with its 433d Fighter-Interceptor squadron. However, no aircraft were assigned to the unit, and January 1958 the 433d FIS was inactivated. It was replaced in February 1960 by the 5th Fighter-Interceptor Squadron (The Spittin Kittens) was transferred to Minot from Suffolk County Air Force Base, New York. The 5th FIS flew the Convair F-106 Delta Dart and later the F-15A Eagle.

A Semi Automatic Ground Environment (SAGE) facility was built and activated in June 1961. The DC-19 SAGE Data Center was housed in a huge, windowless blast-resistant concrete building with a pair of 275-ton AN/FSQ-7 computers. The computers processed air surveillance information and sent the data to Air Defense Command units. It was the only two-story SAGE blockhouse in ADC. The Minot SAGE facility was deactivated after less than two years of operation, in May 1963, never being operational, and the AN/FSQ-7s were never installed. However, DC-19 was used as a Manual Control Center (MCC). The facility was then renamed the PRIDE Building ("Professional Results in Daily Effort") after ADC's and SAC's alternate motto of the 1960s and 1970s, and became a large office building housing many different organizations.

Strategic Air Command (SAC) initially had units assigned to Minot AFB in 1958 for air refueling support. The 4136th Strategic Wing was formed 1 September 1958, consisting of the 906th Air Refueling Squadron, followed by the 4136th Combat Defense Squadron that was activated on 1 June 1959. The first SAC KC-135A Stratotanker assigned, nicknamed "Miss Minot," arrived on 23 September 1959 and remained on base until the 906th Air Refueling Squadron was relocated to Grand Forks AFB, North Dakota, in January 1994. This aircraft was notable for its tail flash - "The Sun Never Sets on the 906th".

On July 2, 1969 the 862d Medical Group was renamed the USAF Hospital. Minot, and the 862d Services Squadron was inactivated; its functions were assumed by the 862d Combat Support Group.

In the early 1990s the base prepared for change as the Air Force directed reorganization. Here, the 5th Bomb Wing assumed host base responsibilities.

On 1 June 1992, Air Combat Command (ACC) was formed, with Strategic Air Command being inactivated. ACC absorbed the former assets of SAC, along with command responsibilities for the Eighth Air Force, and through it, the 5th Bomb Wing and host command of Minot Air Force Base.

In 1993 control of the ICBM force was transferred by ACC to Air Force Space Command. The 91st Missile Wing was assigned to AFSPC on 1 July 1993.

On August 30, 2007, a B-52 took off from Minot AFB carrying six cruise missiles with W-80 nuclear warheads to Barksdale AFB in Louisiana. No base personnel nor the crew knew the nuclear weapons were aboard. This incident drew a national outcry.[3] An investigation found that this was an isolated incident and that only a few people had information on the whereabouts of the missiles.

Additionally on 12 July 2008, three Air Force officers fell asleep while in control of an electronic component that contained old launch codes for nuclear intercontinental ballistic missiles, a violation of procedure, Air Force officials said. The Air Force said the launch codes were outdated and had been deactivated before the incident, but it was still a violation of protocol, prompting an investigation. It is the fourth incident in the past year involving problems with secure handling of components of America's nuclear weapons. The incident occurred during the changing out of components used to facilitate secure communications between an underground missile-control facility and missile silos near Minot Air Force Base in North Dakota, according to Col. Dewey Ford, a spokesman for the Air Force Space Command in Colorado. One of the parts, a code component, is for storage and processing. It is considered classified by the Air Force. A code component was removed from the equipment at the remote missile-control facility and replaced with a new code component. That made the old component inoperable, but an Air Force source said old launch codes were still contained in the part.[4]

Under standard procedure, the four-officer crew of the facility is supposed to keep the component secure until it is returned to the base. Ford said the crew took the component to a building above the facility and locked the component in a lockbox. Then, three of the four crew members fell asleep. This violated Air Force procedure, which calls for at least two of the crew members to remain awake while in control of the component. At the time they were asleep, the crew and the component were in a locked building that is guarded by at least one armed airman at all times. The airmen were asleep for two to three hours, Ford said. The component was later returned to the Minot base, and the investigations of procedural violations were started by Air Force Space Command, the 20th Air Force and the National Security Agency. The investigation revealed the codes were not compromised, according to the Air Force.

The codes had remained secured, and the crew was inside an area protected by Air Force security at all times, the investigation concluded. The incident, which was first made public by the Project on Government Oversight, was the fourth misstep involving the handling of America's nuclear weapons in the past year. The three officers were given non-judicial punishment and subsequently discharged from the Air Force.[5]

There were 2,112 households out of which 68.6% had children under the age of 18 living with them, 86.5% were married couples living together, 3.0% had a female householder with no husband present, and 8.0% were non-families. 6.6% of all households were made up of individuals and none had someone living alone who was 65 years of age or older. The average household size was 3.25 and the average family size was 3.40.

For its dependents, the base has three schools operated by Minot Public Schools: two elementary (Dakota & North Plains) and a middle school (Memorial). High school students (grades 9-12) attend Minot High School in the city of Minot, thirteen miles south. MHS is split between two campuses: Central Campus (downtown) for freshmen & sophomores, and the Magic City Campus (on the southwest side of the city) for juniors & seniors.