Dalton is a small inland country town in the Southern Tablelands of New South Wales, Australia in Upper Lachlan Shire. Its claim to fame is that it is reputed to have the nation's highest rate of earthquakes and tremors.

Dalton is north of the Hume Highway that joins Sydney and Melbourne, between Goulburn and Yass in southern New South Wales, 255 kilometres (158 mi) southwest of Sydney and 79 kilometres (49 mi) northwest of the national capital, Canberra. Nearby towns are Cullerin, Gundaroo, Gunning, Yass, and Murrumbateman. 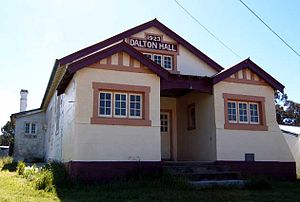 The Monaro region is renowned for its sheep wool industry, notably for the Merino breed. The dry-land farming supports both summer and winter wheat, and some other cereal crops, but agriculture also extends to cattle production for meat.

Like many Australian towns, its economy and social life has fallen into some degree of lethargy, and this has begun to show. The wide streets are generally well maintained; it still has a viable hotel (pub) and several small shops and a petrol station, and the churches are maintained. However, there is a sense[citation needed] that the youth of the town leave for the bigger towns and cities, and that the vibrancy of Dalton's heyday of the early 20th century has gone.

There is a recent move to have bed and breakfast accommodation on farms to offer a "farm experience" to city dwellers. 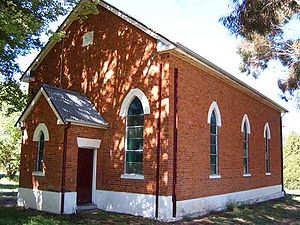 The underlying rock strata of the region from Dalton to Lake George some 40 km east is geologically active, with the lake formed along a fault system running north-south. Water is believed by some to drain from the lake and reappear in the Yass River, leading to speculation that the groundwater lubricates the geological activity along the faults[citation needed].

Several amateur geologists in Dalton and the surrounding region have seismic recorders that automatically send data to Geosciences Australia.

A 5.5 magnitude Richter scale earthquake occurred on 1 January 1949 in the Dalton-Gunning region. It was felt in Canberra.