The North Star Roller Girls League has four teams: the Banger Sisters, Delta Delta Di, Kilmore Girls, and the Violent Femmes. NSRG also has a traveling team, the Supernovas, composed of skaters from all four league teams, which competes against leagues from other areas. The North Star Supernovas are ranked 12th in the North Central Region by the WFTDA (as of October, 2011).

The NSRG is an LLC (limited liability corporation) formed pursuant to the laws of the State of Minnesota. Skaters are not paid to play, and referees, announcers, and support staff are all volunteers. NSRG is committed to partnering with local businesses and charitable organizations in an effort to strengthen and support the community at large. 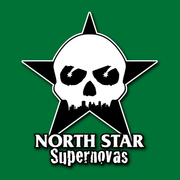 In their first season as a WFTDA league, the North Star Supernovas qualified for the first-ever North Central Regional Tournament (previously, the WFTDA only had two regions) as the 8th-ranked seed. NSRG won 2 out of 3 matches to place fifth overall, including their first WFTDA-sanctioned win over the St. Paul-based Minnesota RollerGirls.

In October, the Supernovas traveled to Sioux City, IA to defend their title as champions of the Rolling Along the River tournament. With three strong wins over the Mississippi Valley Mayhem from LaCrosse, WI and the Paper Valley Roller Girls from Appleton, WI, the Supernovas keep their title and look forward to next year!

For previous year records, check out our new PBWiki.