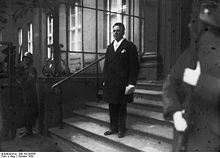 Binchy as Ambassador in Berlin

Daniel Anthony Binchy (1900–1989) was a scholar of Irish linguistics and Early Irish law.

From 1919-20 he was Auditor of the Literary and Historical Society (University College Dublin). His activities shortly after the formation of the Dublin Institute for Advanced Studies are affectionately satirized in Brian O'Nolan's poem Binchy and Bergin and Best, originally printed in the Cruiskeen Lawn column in the Irish Times and now included in The Best of Myles.[1]

He served as Ireland's ambassador to Germany from 1929 to 1932.[2] While there he received instruction from Rudolf Thurneysen which allowed him to begin his study of Early Irish Law. He was, for a time, the main academic investigating the legal system and for some time his ideas were the orthodoxy. While his contributions still underlie the foundations, some of his analysis, however, has since been reexamined. Many of his attempts to connect early Irish law to Celtic Law and even to Indo-European law have come under considerable doubt. However, his contributions are also lasting on account of his production of numerous translations and additions of legal texts. His final major work, the six volume Corpus Iuris Hibernici, collected almost all texts in the native Irish legal tradition, thus offering later scholars a firm ground to stand upon.[3]

Binchy was elected a Foreign Honorary Member of the American Academy of Arts and Sciences in 1962.[4] He was the uncle of author Maeve Binchy and the academic William Binchy.