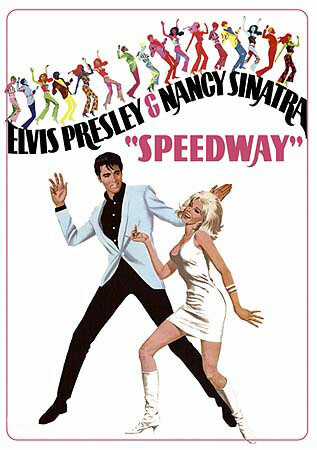 "Speedway" is a 1968 starring as a driver. Parts of the film were shot at the in and features the guest appearances of several of the top drivers of the day. This would be the final "formula" musical film of his career. His last films were less musical and more adult in tone. Although the film was completed in the early Summer of 1967, it was not released in theatres until the Spring of 1968. No special reason was given for this delay but Elvis's films release schedule was so busy (three of his movies hit the theatres in 1967) that maybe that is the reason why this film was only released almost a year after it was completed. It did not harm the film as it was Elvis's last real box-office hit.

The songs were recorded at Studios in in June 1967. Included is Nancy Sinatra's rendition of "Your Groovy Self" and her duet with Presley, "There Ain't Nothing Like A Song", the only time a non-Elvis track was allowed on one of his soundtrack albums (see ""). The was released in June of 1968 to coincide with the motion picture. This was the last Presley film to have a full soundtrack album (not counting the later "" concert film), and in fact is the only one of Presley's last six acting films to be given that honor. The soundtrack LP was also the last Presley album to be released in both stereo and mono editions, as mono musical releases were finally phased out by RCA. The extremely rare mono album (LPM-3989) can fetch four figures in excellent condition and has become a sought-after item among die-hard Elvis collectors.

The soundtrack album is also noted as being the final Presley album release prior to "", which is acknowledged as the start of his so-called 1968 Comeback, which marked a modernizing of arrangements and song choice for him.