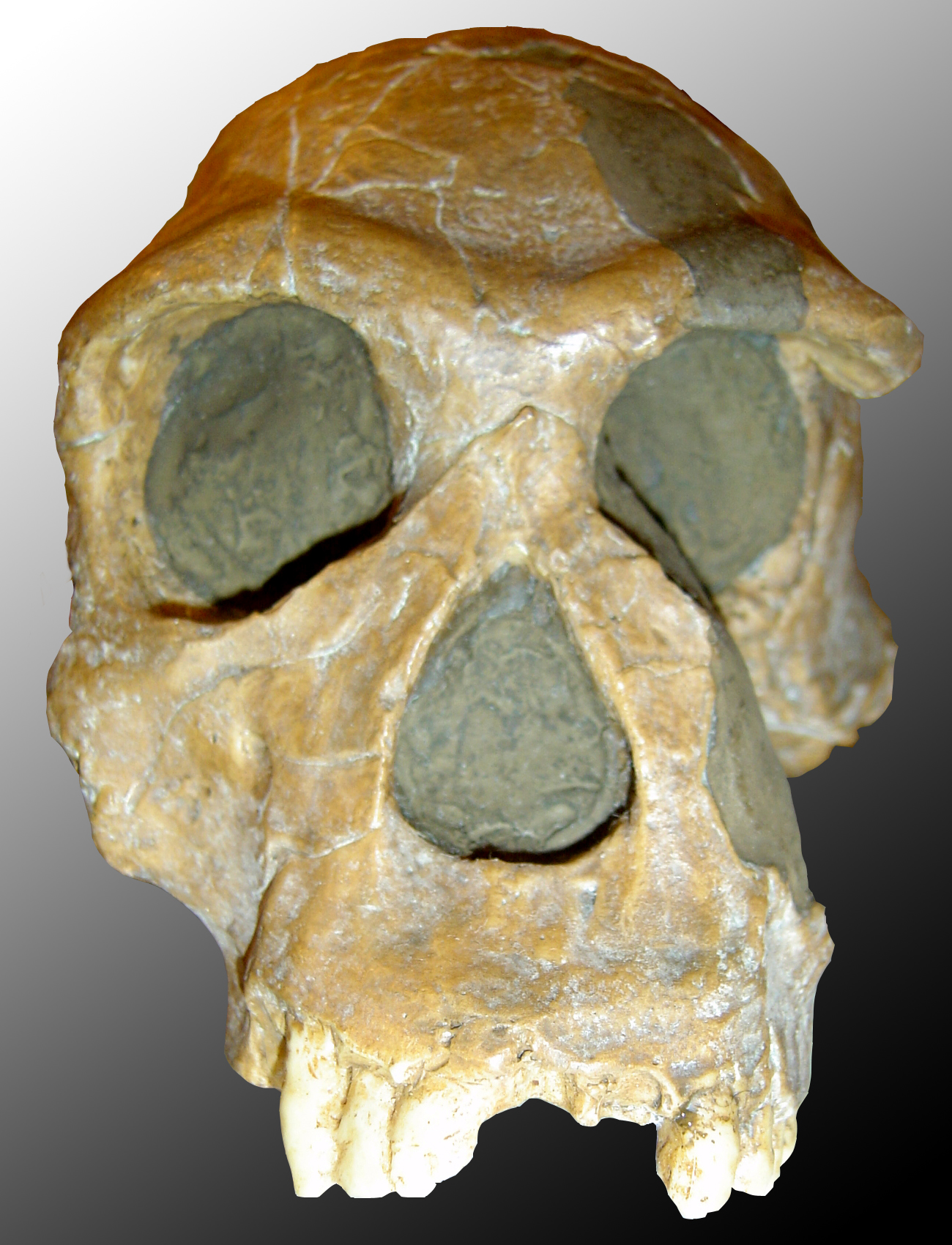 "Homo habilis" (pronEng|ˈhoʊmoʊ ˈhæbəlɪs) ("handy man", "skillful person") is a of the genus "Homo", which lived from approximately 2.2 million to at least 1.6 million years ago at the beginning of the . [ [http://www.nytimes.com/2007/08/09/science/08cnd-fossil.html?ref=science New York Times] article "Fossils in Kenya Challenge Linear Evolution" published August 9, 2007 says "Scientists who dated and analyzed the specimens — a 1.44 million-year-old Homo habilis and a 1.55 million-year-old Homo erectus — said their findings challenged the conventional view that these species evolved one after the other. Instead, they apparently lived side by side in eastern Africa for almost half a million years."] The definition of this species is credited to both Mary and , who found s in , , between 1962 and 1964. [ describes the discovery and naming of the first "habilis" in "The Making of Mankind", pp 65-66 of the Dutton 1981 hardcover edition. It was found by at Olduvai, and was called at first "Jonny's child." Richard says that Louis named the fossil for its "ability to make tools" and that "habilis" means "skilful." By another account (see the notes for ) Louis solicited a name from , which translated as "handyman." Later it became OH 7 described under "Famous specimens" below.] "Homo habilis" is arguably the first species of the "Homo" genus to appear. In its appearance and morphology, "H. habilis" was the least similar to modern humans of all species to be placed in the genus "Homo" (except possibly ""). "Homo habilis" was short and had disproportionately long arms compared to modern humans; however, it had a reduction in the protrusion in the face. It is thought to have descended from a species of hominid. Its immediate ancestor may have been the more massive and ape-like "Homo rudolfensis". "Homo habilis" had a slightly less than half of the size of modern humans. Despite the ape-like morphology of the bodies, "H. habilis" remains are often accompanied by primitive stone tools (e.g. , and , ).

"Homo habilis" has often been thought to be the ancestor of the lankier and more sophisticated "", which in turn gave rise to the more human-appearing species, "". Debates continue over whether "H. habilis" is a direct human ancestor, and whether all of the known fossils are properly attributed to the species. However, in 2007, new findings suggest that the two species coexisted and may be separate lineages from a common ancestor instead of "H. erectus" being descended from "H. habilis". [cite journal | title = Implications of new early "Homo" fossils from Ileret, east of Lake Turkana, Kenya | author = F. Spoor, M. G. Leakey, P. N. Gathogo, F. H. Brown, S. C. Antón, I. McDougall, C. Kiarie, F. K. Manthi & L. N. Leakey | journal = Nature | issue = 448 | pages = 688–691 |date= | doi = 10.1038/nature05986 | volume = 448]

One set of fossil remains (OH 62), discovered by and Tim White in Olduvai Gorge in 1986, included the important upper and lower limbs. An older (1963) finding from the Olduvai site found by N. Mbuika had included a lower jaw fragment, teeth and upper mandible possibly from a female dating 1.7 million years old. The remains from 3 skeletons stacked on top of each other [ - "Dawn of Man" (2000) by Robin Mckie| ISBN 0-7894-6262-1] demonstrated australopithecine-like body with a more human-like face and smaller teeth. Compared to s, "H. habilis"'s brain capacity of 590 and 650 cm³ was on average 50% larger than australopithecines, but considerably smaller than the 1350 to 1450 cm³ range of modern "". These hominins were smaller than modern humans, on average standing no more than 1.3 m (4 ft 3 in) tall.

The small size and rather primitive attributes have led some experts (Richard Leakey among them) to propose excluding "H. habilis" from the genus "Homo", and renaming as "Australopithecus habilis".

is a relatively complete cranium which dates 1.9 million years old, discovered at , Kenya by in 1973. The brain capacity is 510 cm³, not as impressive as other early specimen and forms of Homo habilis discovered.

dates 1.75 million years old and was discovered by Jonathan Leakey on November 4, 1960 at Olduvai Gorge, Tanzania. It is a lower jaw complete with teeth and due to the size of the small teeth; researchers estimate this individual had a brain volume of 363 cm³. Also found were more than 20 fragments of the left hand. Tobias and Napier assisted in classifying OH-7 as the type fossil.

(AKA "Twiggy") is a roughly deformed cranium dating 1.8 million years old discovered in October 1968 at Olduvai Gorge, Tanzania by Peter Nzube. The brain volume is just under 600 cm³; also a reduction in a protruding face is present compared to members of more primitive Australopithecines. Twiggy was found in a distorted matrix with a coating of limestone rock.

is a specimen of an adult "H. habilis" made of 3 pieces of cranium dating 1.74 million years old from Koobi Fora, Kenya. Previous assumptions were that this specimen belongs to "H. erectus" based on the degree of and overall cranial shape.

"Homo habilis" is thought to have mastered the era (Early Paleolithic) which utilized stone flakes. These stone flakes were more advanced than any tools previously used, and gave "H. habilis" the edge it needed to prosper in hostile environments previously too formidable for s. Whether "H. habilis" was the first hominin to master stone tool technology remains controversial, as "", dated to 2.6 million years ago, has been found along with stone tool implements at least 100,000 - 200,000 years older than "H. habilis".

Most experts assume the intelligence and social organization of "H. habilis" were more sophisticated than typical australopithecines or s. Yet despite tool usage, "H. habilis" was not the master hunter that its sister species (or descendants) proved to be, as there is ample fossil evidence that "H. habilis" was a staple in the diet of large predatory animals such as "", a large scimitar-toothed predatory cat the size of a . [cite web |url= http://news.nationalgeographic.com/news/2002/01/0102_020107maneater.html |title= Killer Cats Hunted Human Ancestors |work= National Geographic News |author= Hillary Mayell
accessdate= 2008-02-15 ] "H. habilis" used tools primarily for scavenging, such as cleaving meat off of carrion, rather than defense or hunting. "Homo habilis" is thought to be the ancestor of the lankier and more sophisticated "", which in turn gave rise to the more human-appearing species "Homo erectus". Debates continue over whether "H. habilis" is a direct human ancestor, and whether all of the known fossils are properly attributed to the species.

"Homo habilis" co-existed with other "Homo"-like bipedal primates, such as "", some of which prospered for many millennia. However, "H. habilis", possibly because of its early tool innovation and a less specialized diet, became the precursor of an entire line of new species, whereas "Paranthropus boisei" and its robust relatives disappeared from the fossil record. "Homo habilis" may also have coexisted with "Homo erectus" in Africa for a period of 500,000 years. [ [http://news.bbc.co.uk/1/hi/sci/tech/6937476.stm Finds test human origins theory] ]

The classification of "H. habilis" into the "Homo" genus is controversial. Like "Homo rudolfensis", "H. habilis" lacked many of the things that were unique to later hominins such as slim hips for walking long distances, a sophisticated sweating system, narrow birth canal, and legs longer than arms. Such traits as noticeable whites in the eyes, smaller hairs resulting in exposed skin, and a naked appearance remain theoretical.

The evolution of "Homo habilis" is associated with the species' movement from the central Saharan region of Africa into the more demanding, yet resourceful habitats of Europe and to a lesser extent Asia. The major developments which contributed to this phenomenon were the greater knowledge and skill with which "Homo habilis" crafted the rock blade, increasing knowledge about climate and how to adapt accordingly and the evolution of the voice-box which allowed greater co-ordination in hunting than was hitherto possible. "Homo habilis", due perhaps to many years of adaptation, were able to create flint blades with 10 cm (4 in) of cutting blade, this finer blade was strong enough to advance "Homo habilis" from scavenger to hunter. After many thousands of years of adaptation, humans were eventually able to accumulate enough information about the climate to adapt accordingly, building fires and wearing thick hides to stave off the cold. The evolution, or more so the moving of the voice box from the top of the throat to the bottom allowed a greater variety of speech required to co-ordinate and communicate during hunts. All of these evolutionary measures allowed "Homo habilis" to exploit the harsher climates of Asia and the borders of Europe. The western and central region of Europe was not settled by humanoids until the time of "Homo erectus".Fact|date=June 2007