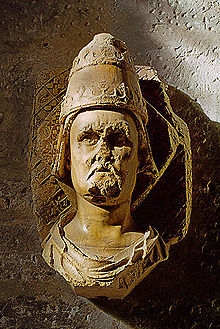 Robert of Geneva (1342–16 September 1394) was elected to the papacy as (Anti-)Pope Clement VII by the French cardinals who opposed Urban VI, and was the first Avignon antipope of the Western Schism.

In 1377, while serving as papal legate in upper Italy (1376-78), in order to put down a rebellion in the Papal States, known as the War of the Eight Saints, he personally commanded troops lent to the papacy by the condottiere John Hawkwood to reduce the small city of Cesena in the territory of Forlì, which resisted being added to the Patrimony of Peter for the second time in a generation; there he allegedly authorized the massacre of 4,000 civilians, an atrocity even by the rules of war at the time, which earned him the nickname butcher - or executioner of Cesena.

Elected pope at Fondi on 20 September 1378 by the French cardinals in opposition to Urban VI, he was the first antipope of the Western Schism, the second of the two periods sometimes referred to as the Great Schism, which lasted until 1417. France, Scotland, Castile, Aragon, Navarre, Portugal, Savoy, and some minor German states acknowledged his authority. Unable to maintain himself in Italy, he took up his residence at Avignon in the southern French Comtat Venaissin, where he became dependent on the French court. He created excellent cardinals but donated the larger part of the Pontifical States to Louis II of Anjou, resorted to simony and extortion to meet the financial needs of his court, and seems never to have sincerely desired the termination of the schism.

Eventually it was determined that he would be recorded as an antipope rather than as a pope. Uncertainty over who the legitimate pope might be during the time of the Western Schism gave rise to the legal theory called Conciliarism, which claimed that a general council of the church was superior to the pope and could therefore judge between rival claimants.