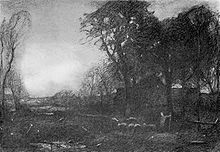 Charles Melville Dewey (1849 – 1937) was an American tonalist painter. He was born in Lowville, N. Y. Confined to his bed from his twelfth to his seventeenth year by a hip disease, he formed the poetic conception of nature which appears in his pictures. He studied in the schools of the National Academy of Design, New York (1874-76), and in Paris under Carolus-Duran, whom he assisted to paint a ceiling in the Louvre. In 1878 he returned to New York. Dewey's work is full of a highly individual, poetic sentiment and generally depicts subdued morning and evening effects. His landscapes in oil and water color are in many public galleries and private collections in the United States. Among his best are: