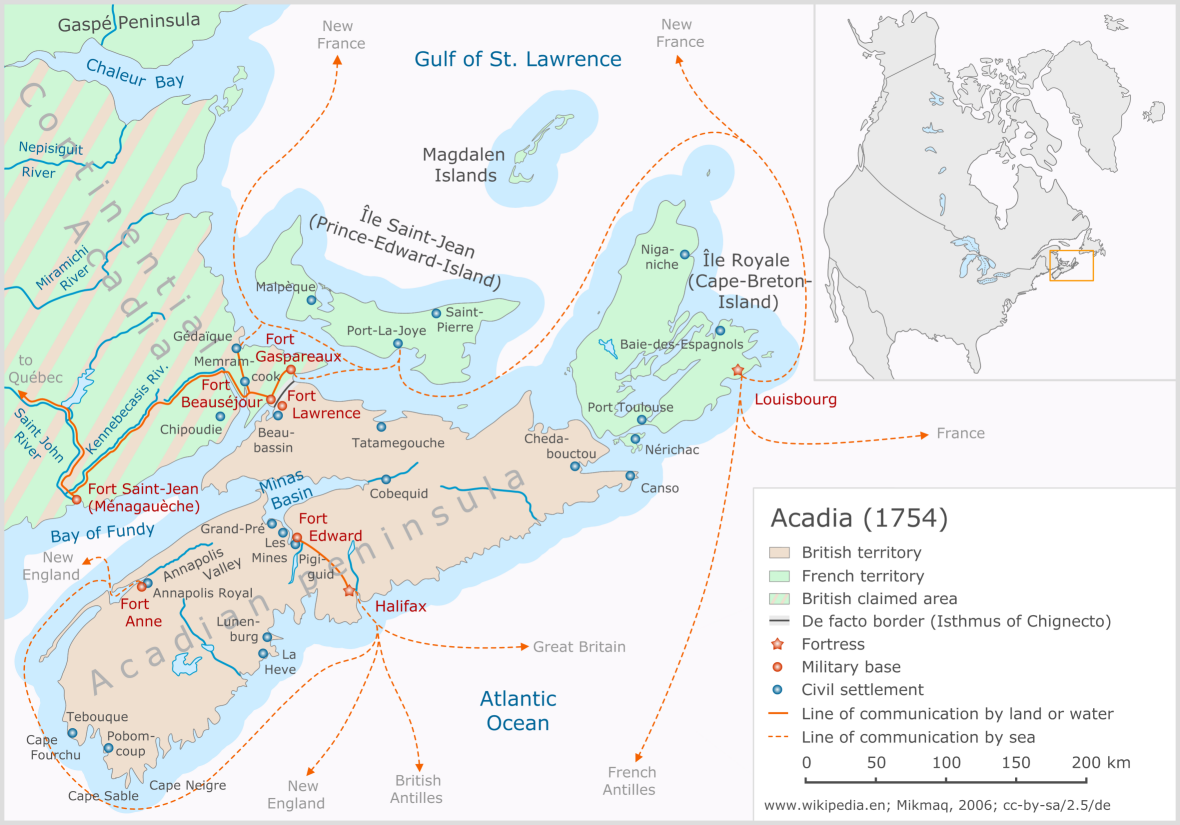 Acadia (in the "Acadie") was the name given to lands in a portion of the French colonial empire in northeastern that included parts of eastern , the Maritime provinces, and modern-day , stretching as far south as .

The actual specification by the French government for the territory refers to lands bordering the Atlantic coast, roughly between the 40th and 46th parallels. Later, the territory was divided into the British colonies which became and American states.

The origin of the name Acadia is credited to the explorer , who on his sixteenth century map applied the Greek term "", meaning the proverbial land of plenty, to the entire Atlantic coast north of .

The "Dictionary of Canadian Biography" says "'Arcadia,' the name Verrazzano gave to Maryland or Virginia 'on account of the beauty of the trees,' made its first cartographical appearance in the 1548 Gastaldo map and is the only name to survive in Canadian usage. It has a curious history. In the 17th century Champlain fixed its present orthography, with the 'r' omitted, and Ganong has shown its gradual progress northwards, in a succession of maps, to its resting place in the Atlantic Provinces."

The Acadian peninsula was a series of coastal lowlands ringed by salt marshes. The area is subject to very high tides – regularly as much as 25 feet in change. The interior of the peninsula was heavily wooded and crisscrossed with creeks, lakes, and bogs. [Faragher, John Mack (2005). A Great and Noble Scheme. W.W. Norton & Co., New York. ISBN 0-393-05135-8] Acadia was very geographically isolated

Median temperatures in January and February were often 15 to 20 degrees colder than western France, where many of the settlers were from.

Early European colonists, who would later become known as , were French subjects primarily from the to in the "département" of west-central France. The first French settlement was established by , Governor of Acadia, under the authority of King Henry IV, on Saint Croix Island in 1604. The following year, the settlement was moved across the to Port Royal after a difficult winter on the island and deaths from . In 1607 the colony received bad news: King Henry had revoked Sieur de Monts' royal fur monopoly, citing that the income was insufficient to justify supplying the colony further. Thus recalled, the last of the Acadians left Port Royal in August of 1607. Their allies, the native nation, kept careful watch over their possessions, though. When the former Lieutenant Governor, , returned in 1610, he found Port Royal just as it was left. [Faragher, John Mack (2005). "A Great and Noble Scheme". W.W. Norton & Co., New York. pp. 17–19. ISBN 0-393-05135-8]

The French took control of the territory. In 1654, King appointed aristocrat as governor of large portions of Acadia and granted him the confiscated lands and the right to all its s.

asserted sovereignty over Acadia in 1674 after privateer captured the forts at Pentagoet and Jemseg. Control over the region reverted to France when Aernoutsz's appointed administrator, , was captured by New England within a few months. The continued to assert a paper claim over Acadia until 1678, appointing as its governor, although they never successfully recaptured actual control of the territory.

On , the French residents of Acadia were given one year to declare allegiance to Britain or leave .Fact|date=February 2007 In the meantime, the French signalled their preparedness for future hostilities by beginning the construction of on Isle Royale, now . The British grew increasingly alarmed by the prospect of disloyalty in wartime of the Acadians now under their rule.

In the summer of 1755, the British attacked and burned Acadian homes at the outbreak of the between Britain and France (the North American theatre of the ), accusing Acadians of disloyalty (for not having taken the oath) and action. Those who still refused to swear loyalty to the British crown then suffered what is referred to as the when, over the next three years, some 6,000–7,000 Acadians were expelled from Nova Scotia to France or the lower British American colonies. Others fled deeper into Nova Scotia or into French-controlled Canada. The Quebec town of L'Acadie (now a sector of ) was founded by expelled Acadians. [ [http://www.ville.saint-jean-sur-richelieu.qc.ca/cgi-bin/index.cgi?page=y1_2 Ville de Saint-Jean-sur-Richelieu history] ]

After 1764, many exiled Acadians finally settled in , which had been transferred by France to Spain before the end of the French and Indian War. The name "Acadian" was corrupted to "," which was first used as a pejorative term until its later mainstream acceptance. Britain allowed some Acadians to return to Nova Scotia, but these were forced to settle in small groups and were permitted to reside in their former settlements such as , Port Royal, and .

Acadia was located in territory disputed between France and Great Britain. England controlled the area from 1654 until 1670 and control was permanently regained by its successor state, the United Kingdom Of Great Britain, in 1713. Although France controlled the territory in the remaining periods, French monarchs consistently neglected Acadia, failing to contribute much, if at all, to its defence, development, colonization, or administration, leaving the colonists to rely on themselves.

With no strong royal authority, the Acadians implemented village self-rule.

Most of the immigrants to Acadia were French peasants whose oppression by the noble landholders had left them with a deep suspicion of those in authority. This suspicion was transplanted to those in authority in Acadia as well, be they French or English.

After a 1692 visit, , described the Acadian men as "'well-built, of good height, and they would be accepted without difficulty as soldiers in a guards' regiment. [They are] well-proportioned and their hair is usually blond. [They are] robust, and will endure great fatigue; [they] are fine subjects of the king, passionately loving the French of Europe'".

Before 1654, trading companies and patent holders concerned with fishing recruited men in France to come to Acadia to work at the commercial outposts.

Some of the earliest settlers married women of the local tribe who had converted to .

Most of the immigrants to Acadia were peasants in Europe, making them social equals in the . The colony had limited economic support or cultural contacts with France, leaving a "social vacuum" that allowed "individual talents and industry ... [to supplant] inherited social position as the measure of a man's worth."

Marriages were generally not love matches but were arranged for economic or social reasons. Parental consent was required for anyone under 25 who wished to marry, and both the mother's and father's consent was recorded in the marriage deed.

The Acadians were suspicious of outsiders and did not readily cooperate with census takers. The first reliable population figures for the area came with the census of 1671, which noted fewer than 450 people. By 1714, the Acadian population had expanded to 2,528 individuals, mostly from natural increase rather than immigration.

In the 18th century, some Acadians migrated to nearby (now Prince Edward Island) to take advantage of the fertile cropland. In 1732, the island had 347 settlers but with 25 years its population had expanded to 5000 Europeans. [Moogk (2000), p. 6.]

Most Acadian households were self-sufficient

After 1630, the Acadians began to build dykes and drain the sea marsh above Port Royal. The high salinity of the reclaimed coastal marshland meant that the land would need to sit for three years after it was drained before it could be cultivated.

As time progressed, the Acadian agriculture improved, and Acadians traded with the British colonies in to gain ironware, fine cloth, rum, and salt. During the French administration of Acadia, this trade was illegal, but it did not stop some English traders from establishing small stores in Port Royal.

Many adult sons who did not inherit land from their parents settled on adjacent vacant lands to remain close to their families.

Today, Acadia has been used to refer to regions of with French roots, language, and culture, primarily in New Brunswick, Nova Scotia, Maine and Prince Edward Island.

The French language has gradually returned to modern Acadia, and from 1951 through 1986 over 58% of the Acadian population spoke French as their maternal tongue.

The anthem of contemporary Acadia is "", and it is represented by the flag adopted at , in 1884.