The impetus behind Operation Deep Freeze I was the International Geophysical Year 1957–58. IGY, as it was known, was a collaboration effort between forty nations to carry out earth science studies from the North Pole to the South Pole and at points in between. The United States, along with Great Britain, France, Japan, Norway, Chile, Argentina, and the U.S.S.R. agreed to go to the South Pole—the least explored area on Earth. Their goal was to advance world knowledge of Antarctic hydrography and weather systems, glacial movements, and marine life. The U.S. Navy was charged with supporting the U.S. scientists for their portion of the IGY studies.

The U.S. Navy already had a record of earlier exploration in Antarctica. As early as 1839, Captain Charles Wilkes led the first U.S. Naval expedition into Antarctic waters. In 1929, Admiral Richard E. Byrd established a naval base at Little America I, led an expedition to explore further inland, and conducted the first flight over the South Pole. From 1934–35, the second Byrd Expedition explored much further inland and also "wintered over". The third Byrd Expedition, in 1940, charted the Ross Sea.

After World War II, from 1946–47, Byrd was instrumental in the Navy's Operation Highjump that charted most of the Antarctic coastline. In 1948, Commander Finn Ronne led an expedition that photographed over 450,000 square miles (1.1 million km²) by air. Then, in 1954–55, the icebreaker USS Atka (AGB-3) made a scouting expedition for future landing sites and bays.

Operation Deep Freeze I prepared a permanent research station and paved the way for more exhaustive research in later Deep Freeze operations. The expedition transpired over the Antarctic summer of November 1955 to April 1956.

The operation involved the following ships: 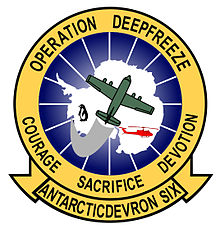 In early 1996, the United States National Guard announced that the 109th Airlift Wing at Schenectady County Airport in Scotia, New York was slated to assume that entire mission from the United States Navy in 1999. The Navy's Antarctic Development Squadron Six had been flying the missions. The 109th, which operated ski-equipped LC-130s, had been flying some National Science Foundation support missions to Antarctica since 1988. It had flown scientific and military missions to Greenland and the Arctic since 1975. The Antarctic operation would be fully funded by the National Science Foundation. The 109th expected to add approximately 235 full-time personnel to support that operation.

The possibility of the Air National Guard taking over the mission had first emerged in 1988. The 109th Airlift Wing had been notified that, almost overnight, one of the Distant Early Warning Line (DEW) radar sites that it supported in Greenland was going to be shut down. The other sites would soon follow and the 109th would be largely out of business because its primary mission had ended. The unit had been informally keeping tabs on Navy LC-130 operations supporting the National Science Foundation in Antarctica. Because its aircraft were older than those of the Air National Guard and several of them were entering an extensive period of depot maintenance, the United States Navy asked if the 109th could provide a limited emergency search and rescue (SAR) capability for two years to support Operation Deep Freeze. The Air Guard accepted. At that time, it had no thought of taking over the mission. The 109th believed that it to be senseless for its aircraft to deploy to the Antarctic and merely to wait to conduct emergency SAR missions, so it asked if the Navy could help carry cargo to the South Pole. The Navy resisted at first because its procedures and cargo configurations differed from those of the Air Guard, but eventually it agreed. The main mission of the U.S. Navy and Air National Guard C-130s was to airlift fuel and supplies to the National Science Foundation's South Pole Station so that its personnel could survive in isolation during the long Antarctic winter which lasted from February to October.

An Air National Guard working group had been formed to study the idea in 1990. The following year, a dialogue between the Air National Guard, the Air Staff, and the United States Navy began. Among other issues, it was difficult at first for the Air Guard to convince the Air Staff to commit long term resources to an area of the world that had not been declared a warfighting region because of international treaties. The Air Guard had supported military operations in Greenland and the Arctic (including classified U.S. Navy operations) since the mid-1970s with the ski-equipped C-130s of the 109th Airlift Wing. It convinced Headquarters, United States Air Force that it was not in the nation's best interest to abandon the capability to achieve quick and reliable air access to both polar regions.

In March 1993, the U.S. Navy hosted a two-day workshop with representatives of the National Science Foundation, Air National Guard, and other interested parties to explore logistics support options for the operation. A draft concept of operations had been prepared by the Air Directorate of the National Guard Bureau in 1993. In February 1996, a commitment was made to transfer the Operation Deep Freeze mission and all LC-130H aircraft operating within the U.S. Department of Defense to the Air National Guard. In September 1996, senior officers from the 109th Airlift Wing briefed the National Guard Bureau on their concept of operations and the status of their preparations to implement Operation Deep Freeze. 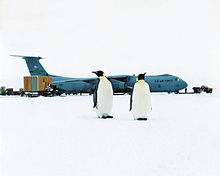 Under the transition plan which they had developed, the Air National Guard would continue to augment the United States Navy during the October 1996 – March 1997 operating season for the United States Antarctic Program. At the end of the October 1997 – March 1998 season, the Air National Guard would assume command of the program. During the third year of the transition program (October 1998 to March 1999), the U.S. Navy would augment the ANG before the latter took over the entire program the following year. There would be seven LC-130s in theater. They would stage from Christchurch International Airport in Christchurch, New Zealand to McMurdo Station, Antarctica. Traditional Guardsmen, technicians, and the cadre of Active Guard Reservists specifically brought on board to support Operation Deep Freeze would all be involved in the mission. When fully transitioned to the Air National Guard, the 109th Airlift Wing would have ten LC-130s in its inventory. These would include upgrades of four LC-130 aircraft in-service with the unit plus three new aircraft and three that would be transferred from the U.S. Navy. Air National Guard estimates of the savings to be realized by consolidating the operation in the hands of the 109th Airlift Wing ranged from US $5 million to US $15 million a year. The actual transition to Air Guard control began in March 1996.

By 1999 the United States Navy had transferred military support operations for Antarctica over to the United States Air Force and its contractor, Raytheon Polar Services. Operation Deep Freeze was managed by the U.S. Air Force and Air National Guard members of Air National Guard Detachment 13, a subordinate unit which administratively reported directly to the Air National Guard Readiness Center (ANGRC) at Andrews Air Force Base in Maryland, and operationally reported to United States Pacific Command (USPACOM) in Honolulu, Hawaii. Upon its deactivation in 2005, the detachment consisted of a full-time officer (Commander) and four full-time non-commissioned officers (Logistics, Communications, Security Forces, and Information Management) which remained in New Zealand year-round.[1] Operational command now belongs to Commander, Thirteenth Air Force, as part of USPACOM. In 2005, through the office of the Secretary of Defense, the commander of U.S. Pacific Command was designated to support the Joint Task Force Support Forces Antarctica, Operation Deep Freeze. CDRUSPACOM delegated this joint operation to the Commander, Pacific Air Forces, who then delegated primary responsibility for execution of the JTF SFA operation to the Commander, 13th Air Force. 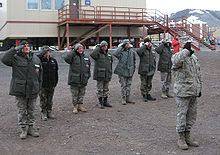 United States civilian and scientific operations on the Antarctic continent are overseen by the United States Antarctic Program (USAP) as well as the National Science Foundation. Military support missions flown from Christchurch International Airport are conducted during the Antarctic summer (late September to early March) each year by USAF C-17 Globemaster III aircraft of the United States Air Force Air Mobility Command (AMC). After the C-17 arrives and is unloaded, LC-130 Hercules aircraft provide the logistical movement of cargo to remote operating locations on the continent. These aircraft are augmented by the United States Coast Guard icebreakers, the Air Force Materiel Command, and the Military Sealift Command. The United States Air Force 13th Air Expeditionary Group (AEG) deploys to Christchurch, New Zealand during the operational season.