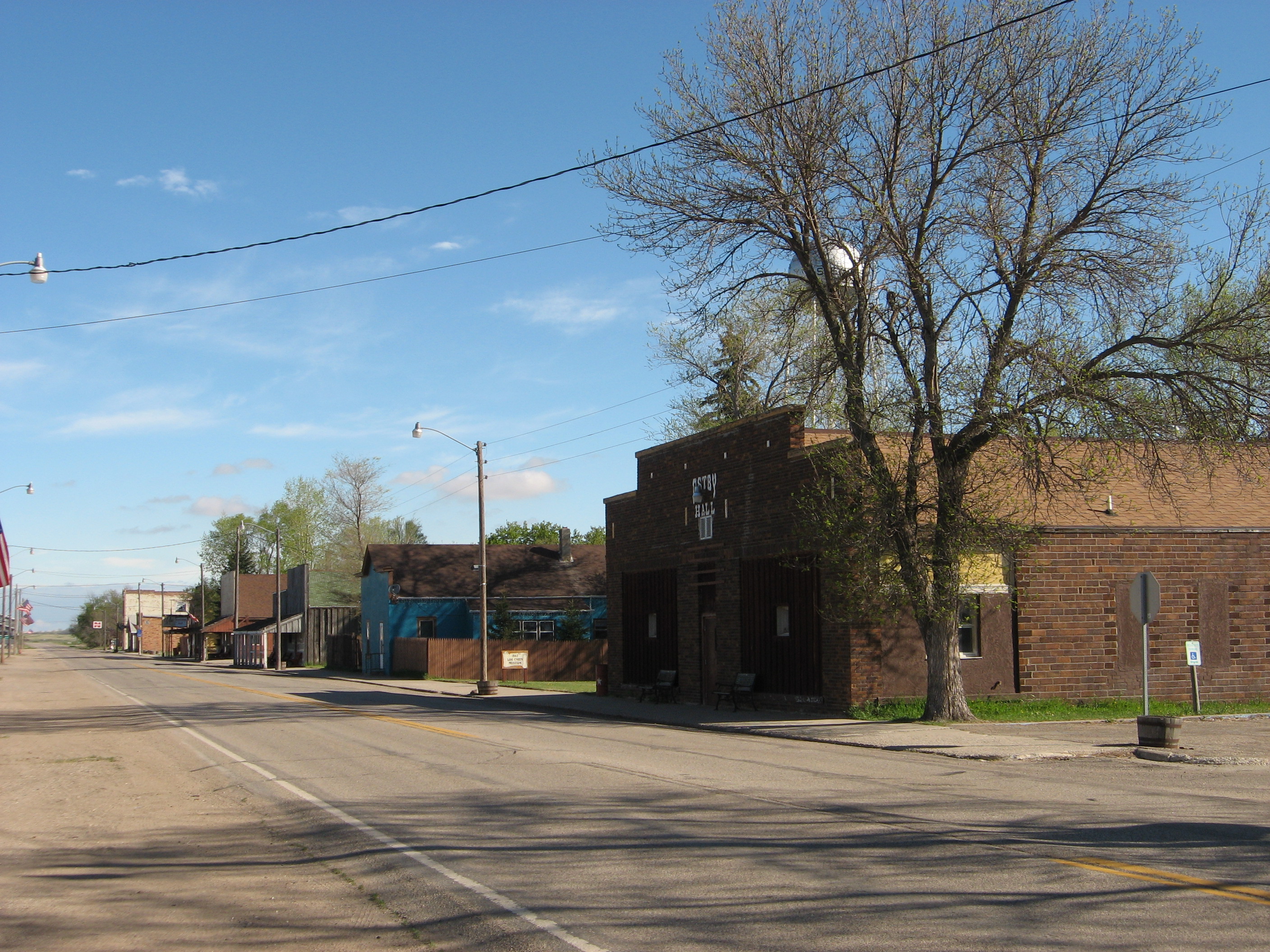 The name "Sheyenne" is derived from the nearby which was named after the Indians. The first explorers in the area misspelled the name, thus changing the "C" to an "S".Herds of once roamed the prairies near the town of Sheyenne. The tribe were the final Native American tribe to move towards the area. The first white settlers came via the Railroad Company. The earliest mention of the settlement came through the based paper, "Normadden". The paper mentioned the building of the section house in and the setting up of six tents in order to establish a townsite and a depot. The main track was laid on November 28, 1884. The railroad began operation to Sheyenne on August 6, 1885.

The main townsite of Sheyenne was obtained by Clarence E. Bennett in 1885, but later came under the jurisdiction of J.W. Richter, who dedicated the townsite in . The first crops grown in the area were common and as much that the land could take. The main source of meat was hunting on the abundant plains, and the other source was in the . People streamed into the community from all parts of the and . Most European settlers came from and . Businesses flourished off railroad workers and farmers.

On December 7, 1894 at approximately 4:30 A.M., a fire began in the George Williams Livery Barn and spread to other businesses on Main Street. Williams' room and soft drink shop were the next to be consumed. The blaze then spread to the Westerlund Hotel and the Hugh Peoples . The post office also caught fire, but N.U. Hanson saved all the mail that was on-hand. The fire was determined to be incindiary of origin. George Williams closed his stables at 2:00 A.M. and locked the door. When firemen arrived at the scene they realized that the door was open, and later it was determined that the fire began in the unused box stall. In the wake of the disaster the merchants rebuilt and continued serving the Sheyenne Area.

Sheyenne was home to C.G. Hayes, a farmer by trade who lived South of the townsite. Hayes became a soldier and was stationed at Fort Totten. He became a scout during the in the Northwest. After that, he served under the Seventh Cavalry banner, and was one of the messengers who sent for reinforcements after The . In 1897 Sheyenne began publishing its first newspaper. The "Sheyenne Star".

Settlers and immigrants continued to swarm to the area as they came via and . They also arrived by and . Businesses in Sheyenne included numerous department stores, meat markets, livery stables, a depot, a blacksmith shop operated by Hans Stenberg, Odegaard's Shop, a feed mill, and land companies. Sheyenne had several elevators that stored different local goods. There was a dealership, numerous service stations, numerous pharmacies, cafes, a hotel, a public bath, and a lumberyard. A cream station, an opera house, and a variety store also existed in Sheyenne at one time. Many banks have come and gone over the brief period of Sheyenne's existence, including the Farmers' State Bank.

The opening of the creamery in Sheyenne was the largest event in Sheyenne history in terms of turnout. The event was created to celebrate the opening of Sheyenne's creamery on June 28, 1913. Over 2000 people were present at the event. The festivities began with a parade that covered 22 blocks that included the Fort Totten Indian Band, the Boy Scouts, and numerous merchants' floats. The parade ended at the creamery where everyone was served free and . Over 1900 ice cream cones were served. The climax of the day was when Professor G.F. Martin of North Dakota Agricultural College, now , spoke about the importance of . A baseball game was then played between Sheyenne and , and at 9:00 a grand ball was held at the opera house.

The Sheyenne area progressed through and the 1918 Influenza epidemic. A shock to the area came in the 1930s with the , when the main industry of the area, , was threatened severely. Poor crop prices influenced Sheyenne's economy and, the was crucial to the life of Sheyenne. It created a park on the south side of Sheyenne that is now owned by the ,it restored the town jail, and its workers built Warsing Dam on the outskirts of the city. In the 1940s numerous residents fought in , and the Sheyenne Star ceased publication. In the second irrigation experimental farm in North Dakota was planned on the land of Bruce Larson, while a major concern of the late 1950s was the high condition in the wells of Sheyenne. The problem was solved by the donating their well to the City of Sheyenne.A major event in the 1960s was the opening of the Tastee-Freez, a fast food and ice cream restaurant, in the the building previously occupied by the city's fire department. Community betterment was the highlight of the 1970s in Sheyenne, when projects such as street paving, courts, townhouses, a museum, and main street revitalization were finished. In 1977 Sheyenne won the North Dakota Community Betterment Award for its work on its projects.

The city of Sheyenne and its vicinity is located in the distinct region of . The Drift Prairie region is characterized by rolling hills and many sloughs. The main body of water near Sheyenne is the , but the man-made Warsing Dam is the main source of recreational activity near the city. The area is also in the Devil's Lake Basin region, home to Devil's Lake, the largest natural body of in the state of . South of the city lies the , which separates the watersheds of the and the . Sheyenne is located at coor dms|47|49|37|N|99|7|1|W|city (47.826821, -99.117018)GR|1.

Sheyenne experiences an extreme . It experiences wide changes and four very distinct . Its location in the center of and the gives it distinctive upper air patterns that vary dramitically from season to season.

There were 146 households out of which 26.7% had children under the age of 18 living with them, 50.0% were married couples living together, 6.2% had a female householder with no husband present, and 41.1% were non-families. 39.7% of all households were made up of individuals and 26.0% had someone living alone who was 65 years of age or older. The average household size was 2.18 and the average family size was 2.94.

*Log Cabin Museum - a pioneer museum showcasing the history of the Sheyenne area. The building was built in 1867 near . It was brought to Sheyenne as part of a community betterment program in the 1970s and was expanded soon after. The original woodwork can be seen in the cabin today. The Log Cabin Museum contains many historic items from the area such as a barber chair, Sheyenne Star newspapers, and articles of clothing owned by — one of the tallest actors in history. It also shows off many Native American artifacts that were found in the region. There is also a Japanese rifle from on display at the museum.

*Warsing Dam - a man made dam on the eastern side of Sheyenne featuring camping and fishing.

*Hendrickson Park - a large park located west of the city. The park offers a baseball diamond, camping facilities, and a trapshoot.

Before the first Sheyenne school was built, classes in 1886 were held in a sod house, but soon a wood-frame building was built west of the Sheyenne's railroad tracks. The first school in Sheyenne was moved to Richter Avenue, and when it became too small, it became the office for the Sheyenne Star newspaper. In 1897, a two-story schoolhouse was built, and the first floor could be used for school purposes only, whereas the second floor could be used for meetings and church services. In 1898, school was closed for two weeks due to an outbreak of and . In the first months of 1903, many pupils left the Sheyenne school to attend n Studies in Greenfield Township. In April 1903, school was prohibited due to a outbreak. In 1908, a new school was built on the eastern side of Sheyenne and in 1930, an addition was made to the two-story brick building. In the late 1950s, it was decided to add on once again. While the project was in progress, the Ostby Hall and Grace Lutheran Church were used as overflow classrooms. In 1962, the project was completed. The Sheyenne High School lasted for 99 years until the spring of 2007, when it closed for its pupils. Today, most children living in and around Sheyenne attend school in nearby New Rockford because Sheyenne is part of the .

Sheyenne was once home to , the "Norweigan Boy Giant". He was much taller than the average man, and went on to be in many films.

In , Sheyenne celebrated it's 125th anniversary. An All-School Reunion was held, along with numerous other festivities such as , a and more.