The high school was established in 1938 due to the rapid expansion of nearby military posts at Fort Lewis.

The cornerstone of the first Clover Park High School was laid June 28, 1938. According to the 1981 Clover Park yearbook, Odyssey, on February 23 of that year a fire destroyed the gym (where the fire had been started), the music center and the business department. Junior Alphred Shropshire was arrested and convicted for starting the fire. One wing of the original school is now used for the school district's Student Services Center.

Approximately 1100 students are enrolled each year. Their school mascot is the Warriors and the colors are kelly green and white with gold accents. During the 2005/2006 school year the current principal, John Seaton, took the reins from the former principal, Paul Tytler, who is now part of Stanford University's School Redesign Network.

In 2006, CPHS was listed in the OSPI (Washington State Office of Public Instruction) document The High Schools We Need: Improving an American Institution.[1] The OSPI document states, "Clover Park is committed to maintaining high expectations for rigorous performance from students."

According to OSPI the evidence of effectiveness:

(1) Between 2002 and 2010, WASL scores increased by 30.4 percent in reading, 4.4 percent in math, 43.7 percent in writing, and 6.9 percent in science.
(2) Over the past seven years, student achievement increased and the gaps narrowed between the racial, ethnic, gender, cultural, and economic class groups within the school.
(3) The annual dropout rate declined from 14.1 percent to 5.5 percent between 2001 and 2010.
(4) The school successfully made adequate yearly progress in all areas in 2005 and was not mandated to do a plan for improvement.
(5) The college retention rate of students who received the Bill and Melinda Gates Scholarship as high school juniors averaged more than 75 percent in each year 2002-2004.
(6) Retention of highly qualified faculty has increased over the last five years. 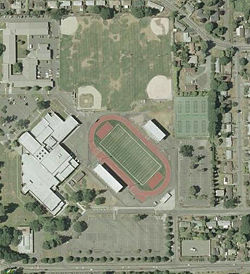 Aerial photo of Clover Park High School. The building in the upper left is part of the old high school, which now houses the Clover Park School District administrative offices.

Out of the approximate 1100 student body, 68 percent are minorities, and 69 percent receive a free or reduced lunch. 10.2% of the student population is transitional bilingual. 69% of the teachers hold Masters degrees and 100% are considered "highly qualified" according to No Child Left Behind Guidelines.

In August 2003, the Bill & Melinda Gates Foundation promised $540,000 over five years to the school to "support personalized learning environments where all students achieve."[2] The school is thus sometimes referred to as a "Gates Grant school," in reference to the donation.

The highly diverse school used the grant to engage in major restructuring as part of the "Smaller Learning Communities Program" (SLCP) which is intended to help large schools create smaller and safer communities within themselves. The program has received criticism, as parents complained that dividing the school into separate "houses" limited the selection of courses, and that attempts to "Raise the Bar" for all students had the effect of "dummying down" the challenges available to more able students.,[3][4]

CPHS is now recognized as a leader in high school reform by the School Redesign Network at Stanford University and OSPI for the improvements in student learning and for narrowing the achievement gap. (SRN case study/ OSPI High Schools We Need).

Every year, Clover Park participates in the Pierce County Daffodil Festival. A competition is held in house to select the Clover Park Princess, who goes on to compete against other regional schools, for the Daffodil Festival Queen title. The Queen title is considered the highest honor of the regional festival. The Clover Park band accompanies the float of Clover Park's princesses every year in the parade, held annually in April. Jaymee Marty is the only princess from Clover Park to become queen, in 1985.

The CPHS fight song is performed to the music of the Washington State University fight song.