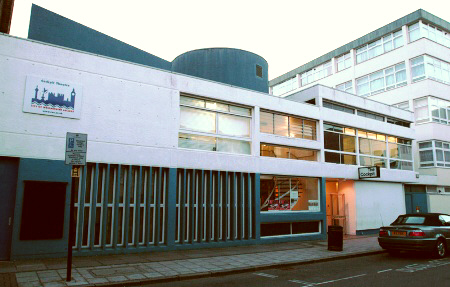 The Cockpit Theatre is a in Marylebone, London. The Cockpit Theatre was designed by Edward Mendelsohn built in 1969-70 by the as a community theatre and is notable as London's first purpose built Theatre In The Round, since the . [cite book |last=Pevsner |first=Nikolaus |authorlink=Nikolaus Pevsner |coauthors=Bridget Cherry |title=London 3: North West |origyear=1990 |series=The Buildings of England |date= |year=1999 |publisher=Penguin Books |isbn=0-14-071048-5] Ownership transferred from ILEA when it was disbanded in 1990 to the London Borough of Westminster, [cite web|url=http://www.opsi.gov.uk/si/si1990/Uksi_19900124_en_14.htm |title=The Education (Inner London Education Authority) (Property Transfer) Order 1990 |accessdate=2008-02-16] who made it part of the newly renamed City of Westminster College [cite web |url=http://www.cwc.ac.uk/pages/content/index.asp?PageID=26 |title=city of Westminster College: History |accessdate=2008-02-16] It remains one of a handful of purpose built theatre training venues in the capital and is still owned and operated by the City Of Westminster College. [cite web|url=http://www.cockpittheatre.org.uk/|title=The Cockpit Theatre|accessdate=2008-02-16]

Between 1993 and 1995 the Soho Theatre Company took up residence and relaunched itself after a period of homelessness. During this period they premiered the works of over 35 new writers. [cite web |url=http://www.sohotheatre.com/p24.html |title=Soho Theatre: History |accessdate=2008-02-16]

The auditorium is 8.5m high and 11m2 with a retractable seating bank on all four sides. Each bank seats 60 people and the seat cushions and backrests can be removed to create alternative playing areas. With the upstage, left and right banks retracted, the downstage centre bank can be pulled out from the standard four rows to 10 rows, creating an end-on configuration. The stage measures 6.6m x 8.6m in thrust setting and 6.6m x 5.9m in-the-round.Upstage, a series of trapdoors span the width of the stage with a series or movable and replaceable panels covering them. Under the stage is a large manually winched lift (now out of service) which can roll along the span of the traps. Although these could be used for stage effects, original plans show this sub-stage area marked as a "chair store" and was to be used as the storage area for seats removed when reconfiguring the space.

There are 2 lighting gantries surrounding the space with the control box on the lower gantry, above the downstage centre seating bank. The lower gantry is 3.5m from the stage, the upper is 6.21m from the stage and each gantry has two scaffold bars for the rigging of lanterns or scenery. The upper gantry also includes a central "T" shaped walkway, with the top edge of the T on the upstage side of the auditorium. The T, and both gantries have 15A power outlets for plugging in to. These sockets are connected to 3 Strand STM , providing 60 ways way of dimming. This equipment was installed when the Cockpit first opened and is still operational to date, as are many of the lanterns.

The design of the gantries allows for access to all lighting positions without the inherent dangers of a or working up a ladder and the cable trunking surrounding the gantries also act as safety barriers to prevent accidental falls.

Now known as "The Cockpit", the theatre has previously had a few other names. Initially named the "Gateforth Street Youth Arts Centre" (and referred to by variations thereof) it was soon decided that a simpler name would be more appropriate. The name 'Cockpit' derived from the 17th century and , both venues used as theatre and rings which nicely echoed the theatre's in-the-round design. Fortuitously, the original design of the foyer floor incorporated a motif which linked nicley to the idea of a plane's . The name "Cockpit Arts Workshop" was adopted and eventually became the "Cockpit Theatre" or simply the "Cockpit".

Since its inception, the Cockpit has been used as a venue for working with young people. Today it is used as a training venue for the City of Westminster College's performing arts, theatre lighting, sound engineering and media students, along with regularly visiting students from and young people from . It also hosts the 's weekend rehearsals every Saturday [cite web |url=http://www.nyjo.org.uk/faqsjoin.htm |title=NYJO rehearsals |accessdate=2008-02-16] and DreamArts every term-time Sunday. [cite web |url=http://www.dreamarts.org.uk |title=DreamArts |accessdate=2008-02-16]

Music In The Round

Between April 1971 and November 1972, recorded "Music In The Round" at the Cockpit. Presented by , the show included performances and interviews with leading musicians across a broad range of genres. Amongst talent showcased in the 22 episodes were The National Youth Jazz Orchestra (having already made the Cockpit their home), who were featured on 7th May 1972 and on 23rd April 1972. [cite web |url=http://ftvdb.bfi.org.uk/sift/series/30744 |title=BFI: Film & TV database - Music In The Round |accessdate=2008-02-19]