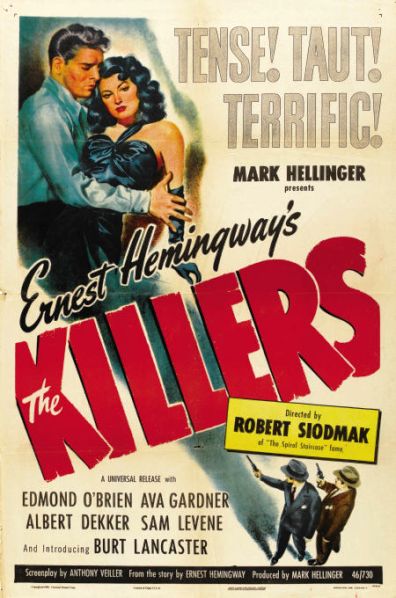 "The Killers" (1946) is an American about the investigation of a mob murder. It is based in part on the short story of the same name by . The film was directed by and features in his screen debut, as well as , , , among others. [imdb title|id=0038669|title=The Killers.] An uncredited co-wrote the screenplay.

The story is about two hit men assigned to find and kill a man, Ole Anderson aka "the Swede" (), at a small-town diner. Impatient for his arrival, they kill him instead at a boarding house where, resigned to his fate, he awaits their arrival.

Because Anderson's life was insured, Investigator Jim Reardon () is assigned to look into the murder for his company. Interviewing several people from Anderson's past, Reardon develops the theory that Anderson's murder stemmed from an unsolved payroll robbery years earlier.

Working with a police detective (), who was a boyhood friend of Anderson's, Reardon sets a plan in motion to trap the hired killers, and the man who hired them.

The first twenty minutes of the film, showing the arrival of the two contract killers, and the murder of "Swede" Anderson, is a close adaptation of Hemingway's short story. The rest of the film, showing Reardon's investigation of the murder, is wholly original. "The Killers" was the first, and to date the only, adaptation of a Hemingway work to leave successfully intact the author's laconic dialogue. According to Hemingway's biographer, Carlos Baker, "The Killers" "was the first film from any of his works that Ernest could genuinely admire." [Baker, Carlos. "Hemingway," Princeton University Press; 4th edition, , .]

Producer paid $36,750 for the screen rights to Hemingway's story, his first independent production. The screenplay was written by , uncredited due to his contract with , and . [ [http://www.criterion.com/asp/release.asp?id=176&eid=274&section=essay Lethem, Jonathan] . , "The Killers": and ," essay. Last accessed: .]

Lancaster wasn't his first pick for the part of "the Swede," but Warner Brothers wouldn't lend out actor for the film. Other actors considered for the part include: , , , and , who was instead cast in the role of the insurance investigator. In the role of the "", Kitty Collins, Hellinger cast Ava Gardner, who had appeared virtually unnoticed in a string of minor films.

The opening chords of 's theme music was later reused for the "Dragnet" television series.

When the film was first released, gave the film a positive review and lauded the acting in the drama. He wrote, " [In] a film called "The Killers," which was the title of the Hemingway piece, Mark Hellinger and Anthony Veiller are filling out the plot. That is, they are cleverly explaining, through a flashback reconstruction of the life of that man who lay sweating in his bedroom, why the gunmen were after him. And although it may not be precisely what Hemingway had in mind, it makes a taut and absorbing explanation... [w] ith Robert Siodmak's restrained direction, a new actor, Burt Lancaster, gives a lanky and wistful imitation of a nice guy who's wooed to his ruin. And Ava Gardner is sultry and sardonic as the lady who crosses him up. Edmond O'Brien plays the shrewd investigator in the usual cool and clipped detective style, Sam Levene is very good as a policeman and Albert Dekker makes a thoroughly nasty thug. Several other characters are sharply and colorfully played. The tempo is slow and metronomic, which makes for less excitement than suspense." [ [http://movies.nytimes.com/movie/review?_r=1&res=9807E4DF1338E53ABC4151DFBE66838D659EDE&oref=slogin Crowther, Bosley] . "," film review, . Last accessed: ]

In a review of the DVD release, Scott Tobias, while critical of the screenplay, described the drama's "noir" style, writing, "Lifted note-for-note from the Hemingway story, the classic opening scene of Siodmak's film sings with the high tension, sharp dialogue, and grim humor that's conspicuously absent from the rest of Anthony Veiller's mediocre screenplay. Taking a page out of the "Double Indemnity" playbook, Veiller has insurance adjuster Edmond O'Brien investigate after the murder takes place, but it's never really clear why he's so passionate about the case. A lean block of muscles and little else, Burt Lancaster stars as the hapless victim, an ex-boxer who was unwittingly roped into the criminal underworld and the even more dangerous gaze of Ava Gardner, a memorably sultry and duplicitous "femme fatale." The story plays strictly by the crime-genre rules, including a $250,000 payroll caper, but Siodmak ("Criss Cross," ""), a director from the German Expressionist school, sustains a fatalistic tone with the atmospheric touches that define "noir," favoring stark lighting effects that throw his post-war world into shadow." [ [http://www.avclub.com/content/node/6883 Tobias, Scott] . "AV Club," film and DVD review, . Last accessed: February 24, 2008.]

The review aggregator reported that 100% of critics gave the film a positive review, based on twenty-nine reviews." [ [http://www.rottentomatoes.com/m/1080205-killers/ "The Killers"] at . Last accessed: , .]

The film was adapted in 1964 using the same title (see: "The Killers"), but an updated plot. It was directed by , and featured and a villainous in his last motion picture. The film was originally made for television around the time of Kennedy's assassination. Siegel's film was deemed too violent for the small screen and was released theatrically, first in , then years later in America. [imdb title|id=0058262|title=The Killers (1964).]