Drapetomania was a supposed mental illness described by American physician Samuel A. Cartwright in 1851 that caused black slaves to flee captivity.[1]:41 Today, drapetomania is considered an example of pseudoscience,[2]:2 and part of the edifice of scientific racism.[3] The term derives from the Greek δραπετης (drapetes, "a runaway [slave]") + μανια (mania, "madness, frenzy").[4] 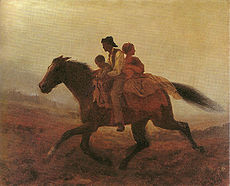 An 1860s painting by Eastman Johnson depicts A Ride for Liberty: The Fugitive Slaves

Cartwright described the disorder — which, he said, was "unknown to our medical authorities, although its diagnostic symptom, the absconding from service, is well known to our planters and overseers"[4] — in a paper delivered before the Medical Association of Louisiana[2]:291 that was widely reprinted.

He stated that the malady was a consequence of masters who "made themselves too familiar with [slaves], treating them as equals".[5]

"If any one or more of them, at any time, are inclined to raise their heads to a level with their master or overseer, humanity and their own good requires that they should be punished until they fall into that submissive state which was intended for them to occupy. They have only to be kept in that state, and treated like children to prevent and cure them from running away." [6]

In Diseases and Peculiarities of the Negro Race, Cartwright writes that the Bible calls for a slave to be submissive to his master, and by doing so, the slave will have no desire to run away.[4]

In addition to identifying drapetomania, Cartwright prescribed a remedy. His feeling was that with "proper medical advice, strictly followed, this troublesome practice that many Negroes have of running away can be almost entirely prevented."[4] In the case of slaves "sulky and dissatisfied without cause" — a warning sign of imminent flight — Cartwright prescribed "whipping the devil out of them" as a "preventative measure".[2]:35[7][8] As a remedy for this disease, doctors also made running a physical impossibility by prescribing the removal of both big toes.[1]:42