Hertford College is one of the constituent colleges of the University of Oxford in England. It is located in Catte Street, directly opposite the main entrance of the original Bodleian Library. As of 2006, the college had a financial endowment of £52m.[1] There are 612 students (396 undergraduates and 216 graduates), plus various visiting students from universities all over the world. Some famous alumni include Jonathan Swift, Thomas Hobbes, Evelyn Waugh, William Tyndale and John Donne.

The college was originally founded (on the current site in Catte Street) as Hart Hall in 1282 by Elias de Hertford. In medieval Oxford, halls were primarily lodging houses for students and resident tutors. Another of these, Magdalen Hall, was founded in 1448, and later moved to the Hart Hall site in 1822. (Magdalen Hall is quite distinct from the similarly named Magdalen College, which was founded in 1458.) In 1874 the two ancient halls were merged to form Hertford College, largely due to the sponsorship of Sir Thomas Baring. Within only seven years, the college came Head of the River in the annual college boat races.

Many of the great minds of the English Renaissance studied at what would eventually become Hertford College, including the metaphysical poet John Donne, satirist Jonathan Swift, the political theorist Thomas Hobbes, and the first translator of the Bible into English, William Tyndale. What had begun as a residential site subsequently grew during the following centuries. Some of the old architecture remains, including the main door (embossed with floral detail), dating from the seventeenth century, and the Old Library. More recent buildings were due to the great architect of Oxford Thomas Graham Jackson, who built the famous Bridge of Sighs over New College Lane (joining the two parts of Hertford College), the beautiful spiral staircase to the Dining Hall, and the College Chapel which enjoys an excellent acoustic. 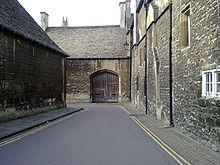 In 1974 Hertford became one of the first five co-educational colleges in the university (the others being Brasenose, Jesus, St Catherine's, and Wadham). It now has an almost equal gender balance, with slight variations from year to year. Traditionally seen as a progressive college, in the 1960s Hertford was one of the first colleges to encourage applicants from state schools through the Hertford Scheme, and it has continued to have a higher proportion of students from state schools relative to private schools. The Hertford Scheme had the effect of dramatically raising academic standards within the College.

More recently the college has benefited from its firm financial footing. With an aggressive buying policy, its library collection has grown to over 40,000 volumes.[citation needed] Among these are many rare 17th-century manuscripts and an original edition of Hobbes' Leviathan given as a personal gift to the college where he prepared his best-known work. Students are accommodated for the full three years either on the main site or on college-owned property primarily in North Oxford and the Folly Bridge area. A new Hertford Graduate Centre fronting the Thames has also been built near Folly Bridge and was opened in 2000. The college playing fields include a pavilion with facilities for most major team sports; its shared boathouse has been recently rebuilt, and the college has a new student gym. Despite its reputation for a relaxed atmosphere, Hertford has featured well in exam results. In 2011, the college ranked 5th in the Norrington Table of results, and over the decade 2000-2009, it was in the top ten most years, an honour shared with Balliol, Christ Church, Magdalen, Merton, New College, and St John's.[2]

Hertford is home to a 'college cat' named Simpkins, who lives in the College Lodge and is the ninth of his lineage to bear that name.

The main college consists of three quadrangles: Old Quadrangle, New Quadrangle, and Holywell Quadrangle. The Old Quadrangle (Old quad, OB [old building] quad for short), as the name suggests, is the oldest and the original quadrangle. It incorporates the lodge, library, chapel, hall, bursary and other administrative buildings. It is also home to many of the studies of senior fellows and tutors. Old quad is the only Hertford quadrangle to have a lawn in the centre, in the traditional college style. The lawn is off-limits during Michaelmas and Hilary terms but is accessible during Trinity term for sitting on (at any time) and croquet (on Fridays and Sundays only). Senior fellows of the college are granted the privilege of being able to walk across the lawn all year round.

The New Quadrangle (New Quad or NB quad for short) is connected to the Old Quadrangle via the famous Hertford Bridge, also known as the Bridge of Sighs, which was designed by Thomas Graham Jackson. New quad is primarily composed of undergraduate housing and associated facilities. With views of the Sheldonian Theatre, the MCR (Middle Common Room) "Octagon" incorporates part of a sixteenth-century chapel built into the old city wall. It is also situated in New quad and is off limits to all undergraduates except those enrolled as mature students or in their fourth year as an undergraduate.

Holywell Quadrangle backs directly onto New quad, and the two are connected by an arched corridor that also contains the steps down to Hertford's subterranean bar. Holywell is almost exclusively first-year undergraduate housing and therefore contains the JCR (Junior Common Room). The Baring Room occupies the highest level of one of five staircases in Holywell and is named after the benefactor whose funding aided Hertford's classificatory transition from a hall of residence to a fully fledged college.

Fellows of the College 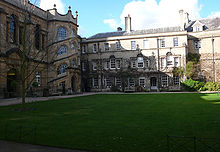