The Brain That Wouldn't Die

The Brain That Wouldn't Die 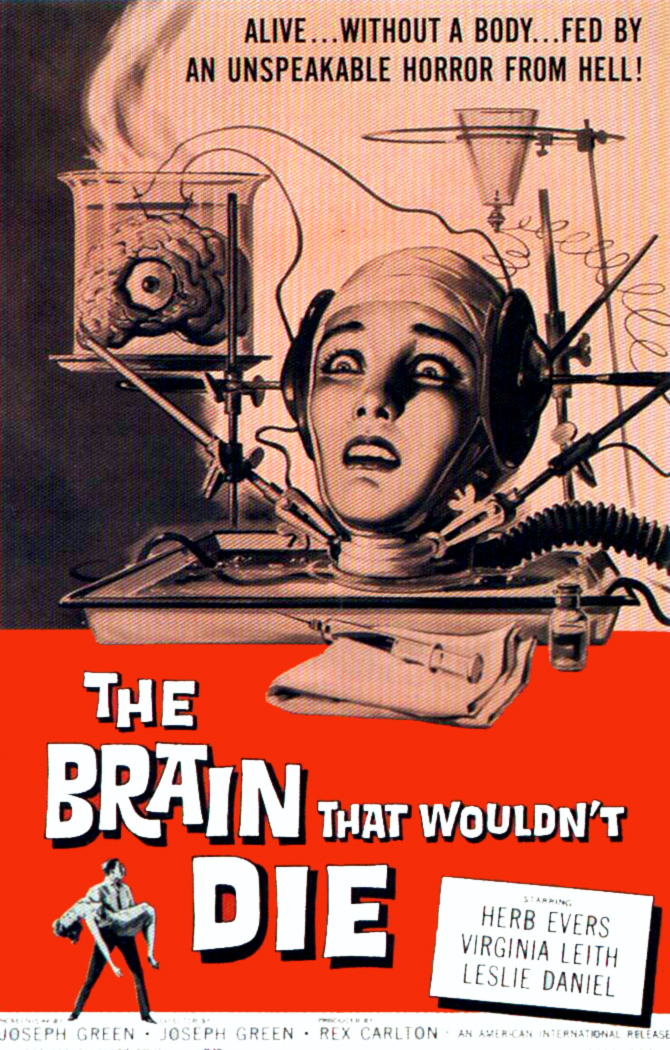 "The Brain That Wouldn't Die", also known as "The Head That Wouldn't Die", is a 1962 science-fiction/ directed by Joseph Green and written by Green and Rex Carlton. A scientist develops a means to keep human body parts alive. When he unexpectedly must use his discovery on someone close to him, events do not go as planned.

This film has fallen into the and can be freely downloaded from the .

Dr. Bill Cortner is a successful scientist with a beautiful fiancée named Jan Compton. After a horrible car accident decapitates Jan, Dr. Cortner collects her severed head and rushes it to his laboratory, where he revives it and manages to keep it alive in a liquid-filled tray.

Dr. Cortner now decides to commit murder in order to obtain an attractive new body to attach to his fiancée's head. As he hunts for a suitable specimen, Jan begins to hatch some murder plans of her own. Filled with hatred for Cortner because he won't let her die, she communicates telepathically with a hideous mutant in the laboratory cell, telling it to kill the scientist.

The monster in the closet is played by in his first "cinematic role". Carmel was a well-known Palestine-born circus attraction who worked under the name "The Jewish Giant". He is the subject of a photograph by entitled "The Jewish Giant at Home with His Parents in the Bronx, NY, 1970".

The film was featured in the comedy "", along with "Donovan's Brain".

In the video game "", two guards turned into "man crates" are having a conversation. One of them quotes the movie's most famous line ("Like all quantities, horror has its ultimate, and I am that!"), and the other recognizes it and adds "I never thought I would ever relate to Jan in the Pan." "The Brain that Woudn't Die" was the first movie watched by Mike Nelson in "" (episode 513). Jan in the Pan is the irreverent nickname given to the female lead post-accident by the characters on the show. Jan in the Pan appears in the out-of-theater segments of the episode (portrayed by ).

In 2006, the movie was adapted into a live stage production by Last Rites Productions, a Portland, Oregon theatre company. The company had previously adapted "", a subject of another "Mystery Science Theater 3000" episode.

In the third issue of the comic book "The Brain That Wouldn't Die" is seen on a double billing with "" at a shut down drive-in theatre.

*The film has been released by multiple studios as a 'bargain bin' disc.
** The "MST3K" version of the film (along with the uncut version, included as a bonus feature) was released by Rhino Home Video.