The Private Life of Sherlock Holmes

The Private Life of Sherlock Holmes 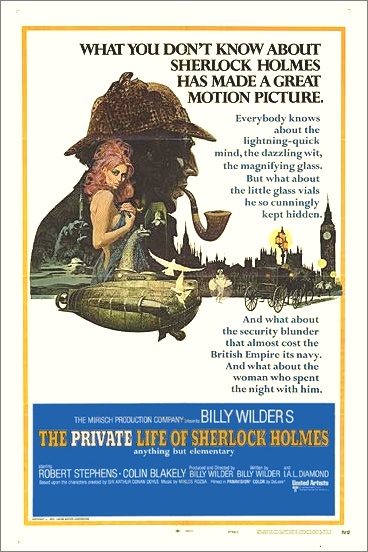 "The Private Life of Sherlock Holmes" is a directed and produced by ; he also shared writing credit with his longtime collaborator . It starred as and as . The film offers an affectionate, slightly parodic look at the man behind the public facade, and draws a distinction between the "real" Holmes and the character portrayed by Watson in his stories for "The Strand" magazine.

The film was originally intended as a attraction, touring major cities only on its initial run. However, it was heavily edited on its original release, and significant sections of the film are now missing.

The film is divided into two separate, unequal stories. In the shorter of the two, Holmes is approached by a famous Russian ballerina (), who proposes that they conceive a child together, one who will hopefully inherit her physique and his intellect. Holmes manages to extricate himself by claiming that Watson is his lover.

In the main plot, Belgian Gabrielle Valadon () is fished out of the and brought to . She begs Holmes to find her missing engineer husband. The resulting investigation leads to a castle in Scotland. Along the way, they encounter a group of monks and some s, and Watson apparently sights the .

It turns out that Sherlock's brother Mycroft () is involved in building a pre- submarine for the British Navy, with the assistance of Mr Valadon. When taken out for testing, it was disguised as a sea monster. The midgets were recruited as crewmen because they took up less space and needed less air. When they meet, Mycroft informs Sherlock that his client is actually a top German spy, Ilse von Hoffmanstal, sent to steal the submersible. The "monks" are German sailors.

Queen Victoria () arrives for an inspection of the new weapon, but is "not amused" by its unsportsmanlike nature. She orders the exasperated Mycroft to destroy it, so he conveniently leaves it unguarded for the monks to take (rigging it to sink when it is submerged). Frau von Hoffmanstal is arrested, to be exchanged for her British counterpart.

In the final scene some months later, Sherlock receives a message from his brother, telling him that von Hoffmanstal had been arrested as a spy in Japan and shot. Saddened, the detective retreats to his room to seek solace from drugs and his violin.

The film originally contained another two separate stories, and a further flashback sequence showing Holmes in his university days. These were all filmed, but later cut from the final release print. One sequence, in which Holmes investigates the seemingly impossible case of a corpse found in an upside down room, has been recovered and restored to the film's release. The Region 1 DVD release restored portions of these segments and several others. They are made up of soundtrack and a series of stills. Another scene features as a descendant of Watson receiving the tin dispatch box from solicitors.

While not a major box office success, the film was well-received by most critics. It has a rating of 95% on Rotten Tomatoes. [ [http://uk.rottentomatoes.com/m/private_life_of_sherlock_holmes/ The Private Life of Sherlock Holmes Movie Reviews, Pictures - Rotten Tomatoes ] ] . A review in described it as the "best Sherlock Holmes movie ever made" and said it was "sorely underrated in the Wilder canon". [ [http://www.empireonline.com/reviews/ReviewComplete.asp?FID=8596 Empire Reviews Central - Review of The Private Life Of Sherlock Holmes ] ]

*Wiggins, the messenger at to whom Mycroft gives instructions regarding various items, shares the name of the leader of the who often assist Sherlock in his investigations.

*The British secret service are seen abandoning the new submarine because of an order from . In fact she was a who had no real power over such matters. The decision would have, in real life, been taken by the Prime Minister.

*After they disembark from the train at , it is seen heading on down the line. In fact Inverness was the terminus of the railway when the film was set.

* informs the Queen that her grandson, Kaiser Wilhelm of Germany, is developing a which will enable the Germans to bomb London. He did not become Kaiser until , and Germany did not start producing Zeppelins until nearly a decade after the film is set.