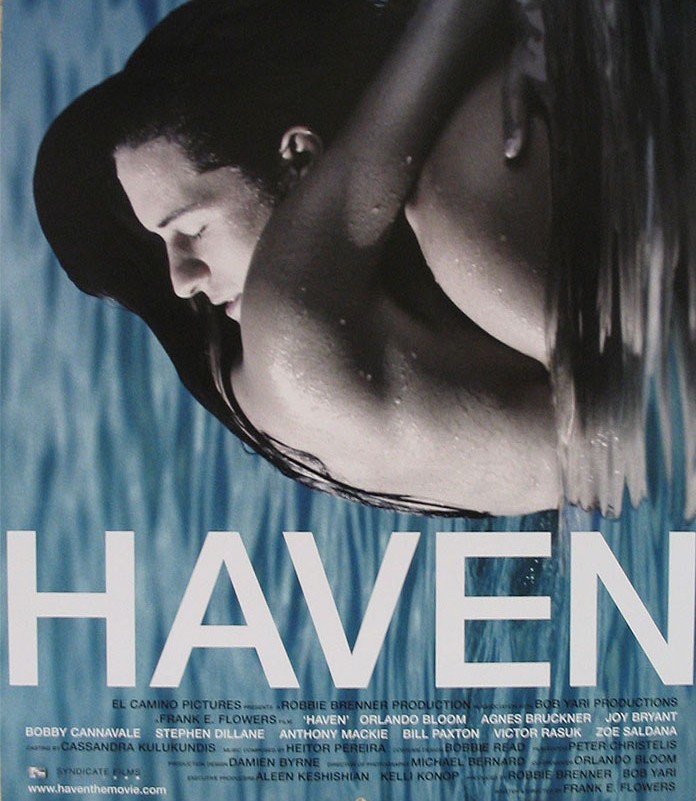 
"Haven" is a 2004 set in the , a British . The film premiered at the in 2004. It is written and directed by native Caymanian and filmed entirely in the 100-square mile West Indies dependency. Haven is an ensemble film in which unconnected lives intersect and result in a violent chain of events that turns tranquility into chaos. "Haven" was released in limited theaters in the on , .

* Tagline: "Can love survive the fall of paradise?"

A corrupt and greedy businessman, Carl Ridley (), is running from the government, with his 18 year old daughter Pippa () in tow. Pippa is not happy to leave her friends and comfortable life in Miami for the .

Arriving in the islands, Ridley is preoccupied. Banks are rapidly closing and he must find a clean place to store his stolen money. Meanwhile, Pippa finds native Caymanian Fritz () sleeping off a late night in her bed, and when she walks in on him, he flees out the window, leaving his wallet behind. She later finds Fritz on the beach to give him back his wallet and befriends him.

Fritz is yearning to show her the island, including its wild parties. But Fritz owes money to island gang leader Ritchie Ritch (), and when he peeks in on Pippa's father handling a lot of cash, Fritz begins scheming. Pippa is completely unaware that she's leading her father into even more trouble than he had in the United States.

Another story which takes place side by side is of Shy () who is Cayman native. He is in love with Andrea daughter of his boss Mr. Sterling who happens to be a very influential person in the island. But Andrea's brother Hammer () hates Shy. Shy and Kimo are very good friends. Whenever shy spends night with Andrea, Kimo would guard the house to inform Shy if Andrea's father arrives. On Andrea's birthday Shy visits her house and has sex with her, but Kimo who was at guard falls asleep and fails to warn Mr.Sterling's arrival. Somehow Shy escapes but gets noticed by Hammer. Later on to avenge his sister's lost womanhood Hammer attacks Shy with acid which makes a permanent scar on Shy's face. In turn Hammer is sent to jail for 4 months.

Meanwhile Shy secludes himself. Andrea is emotionally broken and gives in to drugs and sex. Shy has his friend Patrick, the son of Mr. Allen; Ridley's lawyer, take him to Richie's birthday party to find Andrea. Finding her in the bathroom having sex with a stranger, he runs into the front yard and throws up. She runs after him trying to look at him and talk to him, but he pushes her away knowing she is high. Hammer sees Shy and begins to beat him up with his friends. Shy finally breaks free and runs down the street as Hammer curses at him, telling his to stay away.

Meanwhile at the same party, Fritz gets pulled in to see Richie while Pippa talks to a few other white girls doing drugs. Upset after smoking some pot, she finds Fritz and demands he takes her home. Having just told Richie to go to her home to find the cash, he instead takes her to Mr. Sterling's yachte. However, as they get inside to sit down, they find the alarm has been set off and shortly the police arrive, arresting the both of them. Pippa is taken to the police station while Fritz is taken to a laundramat where a local cop who knows him beats him for acting disobediantly throughout his life.

After his beating, Shy breaks into the party later, being attended by Hammer, with a gun. He explains to Hammer how worse has he made his sister's life and says that he would spare his life to watch the mess he has caused in Andrea's life. Hammer replies that he would be happy to see Andrea become a whore than be with Shy. This rages Shy's temper and he pulls the trigger. Shocked by what he has done, he apoligizes and runs off. Over those few hours, Andrea has Patrick, who is disgusted with her, take him to find Shy. He kicks her out of his car, but later tells her Shy is at the docks. When she finds him, she tells him how she doesn't care what anybody thinks and just wants to be with him.

When Mr. Allen and Pippa's dad go to the police station the next morning, Mr. Ridley finds he has been betrayed and is taken off by an FBI agent with Mr. Allen. Later at home, Pippa has a short and brief conversation with Fritz. When she goes into her room, she discovers that under her matress is a million in cash; the money her father stole.

Later in the movie, Andrea is seen getting ready with her father for a funeral, Kimo conforting Shy's mom, and finally Shy still sitting on the dock from before. He then gets into his boat and drives off, while throwing the gun into the water; ending the moive.