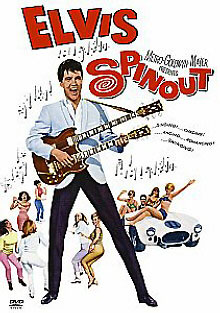 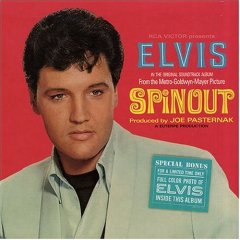 "Spinout" is a 1966 and starring as the lead singer of a band and part-time driver. This has been known for many years as one of Presley's worst films, but recently it has been seen as a parody of the teen film genre and this reassessment has given the film newfound appreciation. However, there has never been any evidence that the film was an intentional parody; this theory is very new, surfacing around the time of its dvd release.

A of the same title as the film was released to coincide with that of the motion picture. The first nine songs were recorded in mid February 1966 at in with the final three recorded in May/June at Studios in . The album is noted for the inclusion of three non-film "bonus tracks" that had been recorded during the sessions that produced Presley's acclaimed "How Great Thou Art" album. These songs included 's "" which, with a running time of more than 5 minutes, was the longest Presley track released to date. Elvis had heard it off of "", released one year prior (Dylan's own recording was made in 1963 but didn't come out till 1971.) Also included was a blues number, "Down in the Alley", and a ballad, "I'll Remember You".

The opening track of the soundtrack album, Joy Byers' "Stop, Look and Listen", is notable for being a cover of a song previously recorded by in February 1965. [http://thegardnerfamily.org/haley/discography/recordings.html]