The St. James-Belgravia Historic District, within Old Louisville, was placed on the National Register of Historic Places in 1972. It comprises St. James Court (north) and the Belgravia Court (south). It was the site of the Southern Exposition, and is bordered to the north by the scenic Central Park, a popular summer destination of Shakespeare in the Park patrons. The area is famous for the St. James Court Art Show that takes place the first weekend of October, and attracts thousands of visitors, artisans, and craftsmen. The Belgravia area features houses inspired by its namesake in London, England, and has no immediate street access, as it is a "walking court" with a green area instead of a street where the main entrances face.[2][3] It features two important houses: the Conrad-Caldwell House, and the Pink Palace.

The Conrad-Caldwell House, once nicknamed "Conrad's Folly", was built 1893 by Arthur Loomis for Theophile Conrad and his wife, Mary. Mr. Conrad found his fortune in the tanning business. After Conrad died on February 13, 1905, William E. Caldwell bought it, and called it their home for 35 years. In 1947 the local Presbyterian church acquired it, and for the next forty years it was the Rose Anna Hughes Presbyterian Retirement Home.[4][5]

This building's style is Richardsonian Mansion. Made of limestone, it cost $75,000 to build. Its vertical framework comes from its heavy corner towers features and turrets that are one of three shapes: coned, hexagonal, and pyramid shaped. Randomly placed on the building are carving of animals, gargoyles, and other objects, fenestration, and intricate foliation. As fitting for a house to receive members of society in the Victorian Era, the interior features marble mantled fireplaces, stained-glass windows, high ceilings in parlors and dining rooms, with carved arched doorways leading the way into these rooms from the reception hall with its large staircase. The interior woodwork is cherry, maple, and oak.[6][7]

The St. James Court Historic Foundation has controlled the building since 1987, and uses it for a museum. 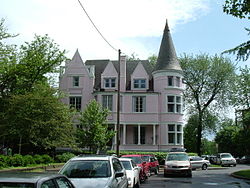 Located at the corner of St. James and Belgravia Courts, the Pink Palace, built in 1891, was not originally a home, but an exclusive Gentleman's Club and Casino for the residents of the Court.

The Pink Palace got its name in the 1920s when it was painted this color by the Woman's Christian Temperance Union, its owner at the time.