Following the invasion of Poland, Nepal declared war on Germany on September 4th, 1939. Subsequently, sixteen battalions of the Royal Nepalese Army fought Japan on the Burmese front. In addition to military support, Nepal contributed guns, equipment as well as hundreds of thousand of pounds of tea, sugar and raw materials such as timber to the allied war effort.

During World War II, There was an internal treaty between Nepal and Britain about the mobilization of Nepalese soldiers. In addition to RNA troops, Nepalese fought in the British Gorkha units and were engaged in combat all over the world. Gorkha troops were part of the allied occupation force in Japan. 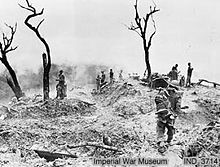 Scraggy Hill (known to the Japanese as Ito Hill) on the Shenam Pass, captured by the 4/10th Gurkhas

When Japan got involved in this war in December 1940, the British presence was threatened in the Indian subcontinent. Britain deployed its troops in India and on the Burma front. Nepalese battalions – Mahindra Dal, Sher, Kali Bahadur and Jagannath- were also deployed. These Nepalese battalions fought under the Allied Command. The Jagannath Battalion took part as engineers to construct tracks, bridges, water points etc.

Nepalese troops fought with distinction in the British 14th Army under Lieutenant General William Slim and helped force the eventual Japanese retreat. Finally, following the atomic bomb attacks on Hiroshima and Nagasaki, Japan surrendered. Most Nepalese troops were withdrawn to Kathmandu in Oct 1945. A grand victory parade was held on 28 October 1945 where many Nepalese soldiers, officers and associated British officers were honored for their appreciable performances.