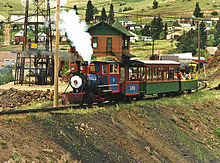 As of the 2008 season, the railroad operates three coal-fired narrow gauge steam locomotives. Engine #1 is an 0-4-4-0 Orenstein & Koppel articulated mallet built in 1902. Engine #2 is a 0-4-0 Henschel built in 1936. Engine #3 is an 0-4-0 H. K. Porter tank built in 1927. Engine #4 is the W. G. Bagnall 0-4-4-0T, built in 1947; this engine is currently in restorations. The 5th engine is a 1951 General Electric, four wheel, Diesel-Electric engine. The engine is currently being used by the CCVNG track crew. This engine was originally a battery operated for underground mining at the Idarado Mine near Telluride.[1]

The track system begins at Bennett Avenue/5th Street going south out of Cripple Creek, goes past the old Midland Terminal Wye, then over a reconstructed train trestle, continues past some historic mines and finally terminates very near the abandoned Anaconda mining camp. The return trip to Cripple Creek completes a total of four miles.[2]